Brexit: 'We will always love you', EU tells UK as it ratifies withdrawal agreement in landslide vote

The European Parliament overwhelmingly approved the Brexit Withdrawal Agreement on Wednesday evening with 621 votes in favour, 49 against and 13 abstentions.

In a debate with the Croatian State Secretary for European Affairs Nikolina Brnjac on behalf of the Presidency of the Council, European Commission President Ursula von der Leyen and the EU’s Chief Negotiator Michel Barnier, the body took stock of the withdrawal process so far and the challenges ahead. 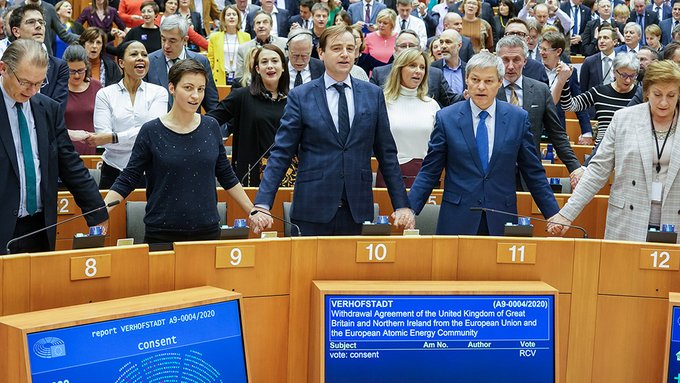 To enter into force, the Withdrawal Agreement will now be put to a final vote by qualified majority in the Council. Photo courtesy: Twitter/@Europarl_EN

“We will always love you and you will never be far," said von der Leyen. “I want the European Union and the United Kingdom to stay good friends and good partners. The story is about old friends and new beginnings.”

Britain is the first country to leave the EU and for many in Europe its official departure at 11 pm GMT on Friday, January 31 is a moment of enormous sadness and reduces the number in the bloc to 27.

Commenting on the historic importance of the vote, most speakers on behalf of the political groups highlighted that the UK’s withdrawal will not be the end of the road for the EU-UK relationship and that the ties that bind the people of Europe are strong and will remain in place.

🇪🇺🇬🇧 Citizens' rights will be protected after #Brexit under the EU-UK withdrawal agreement. Parliament has approved it in time for the country leaving the EU tomorrow. Read more @ https://t.co/ITlbTElF7W pic.twitter.com/bKNnBjNlDa

They also mentioned that there are lessons to be learnt from Brexit that should shape the future of the EU and thanked the UK and its MEPs for their contribution throughout the UK’s membership. Many speakers warned that negotiations on the future relationship between the EU and the UK are going to be difficult, especially taking into account the timeframe of the transition provided in the Withdrawal Agreement.

To enter into force, the Withdrawal Agreement will now be put to a final vote by qualified majority in the Council.

The transition period starting on February 1  is set to expire at the end of December 2020.