Body of Sherin released by US, petition for interfaith burial

The body of three-year-old Indian born Sherin Mathews, who disappeared from her Indian-American adoptive parents home in Richardson, has been released by the Dallas County medical examiner's office, though it declined to say to whom. 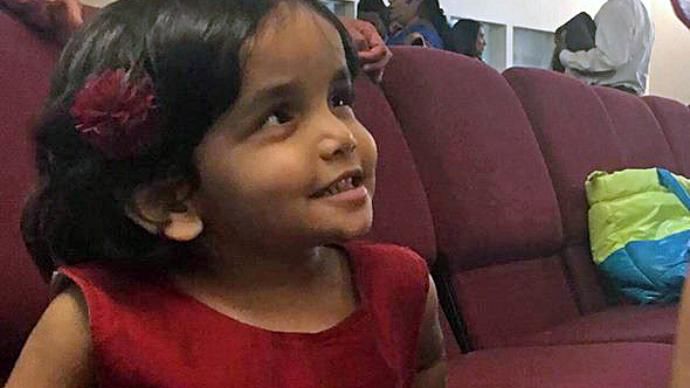 Sherin, who went missing on October 7 from her suburban Dallas home, was found dead in a culvert on October 22. The missing child has become an international point of discussion and has raised several questions on the process of adoption.

Wesley Mathews was re-arrested after he changed his story about Sherin's disappearance from their home. He had earlier claimed that she went missing after he sent her outside their home at around 3 am as punishment for not drinking her milk.

Last week, Wesley voluntarily told the police that Sherin choked on milk and died in the family's garage before he removed her body from the home.

Police are still investigating how Sherin died and how long her body had been in the drainage ditch located nearly 1km from her home.

Thousands of people took to Facebook to post unfounded theories about Sherin's death or videos of themselves crying over "Princess Sherin." They've dubbed her "daughter of the world" and "our child." They follow developments posted on Sherin-focused Facebook pages and Twitter hashtags.

An online petition, created by 23-year-old Richardson resident Omair Siddiqi, who said he has no connection to the Mathews family, asks for authorities to release her body and allow a group to give her an interfaith burial. The petition received more than 5,000 signatures as of last Saturday.

Some people say they signed it to keep Sherin's body in the US. It's unclear how the rumour started that Sherin's body would be sent back to her native India, but there's no indication that's true.

Consulate General of India Houston, Anupam Ray, who has been monitoring this case from day one, told PTI that "consulate has not received any such request. We have not been approached by anyone. All mortal remains being taken to India require a no objection from the Consulate".

"Her body will not be sent back to the country she was adopted from unless her parents decide they want that to happen, regardless of their legal standing," said Steven Kurtz, chief death investigator for the Dallas County medical examiner's office, where Sherin's body was autopsied.
"It's not something that the consulate does. It's all at the request of next of kin," Kurtz said.
The petition asked that "the body of Sherin Mathews not be released to Sherin's adoptive parents (Mr and Mrs Wesley Mathew)," due to the circumstances surrounding her death. But that's not the way the law works, he said.

In a case like this, Sherin's mother would be the one who would make the arrangement for her burial because her father is in jail and unable to do so, Kurtz said.

The only way someone else would get the rights to make arrangements for her body as if her mother appoints someone else to do so, he said adding that no petition can change that.
Even in a case in which both parents are jailed, they would still get to appoint someone to handle the arrangements. Sini Mathews has not been charged with a crime.