Bihar Chief Minister Nitish Kumar submitted his resignation today as his Janata Dal (United) has decided to sever its alliance with the Bharatiya Janata Party (BJP). 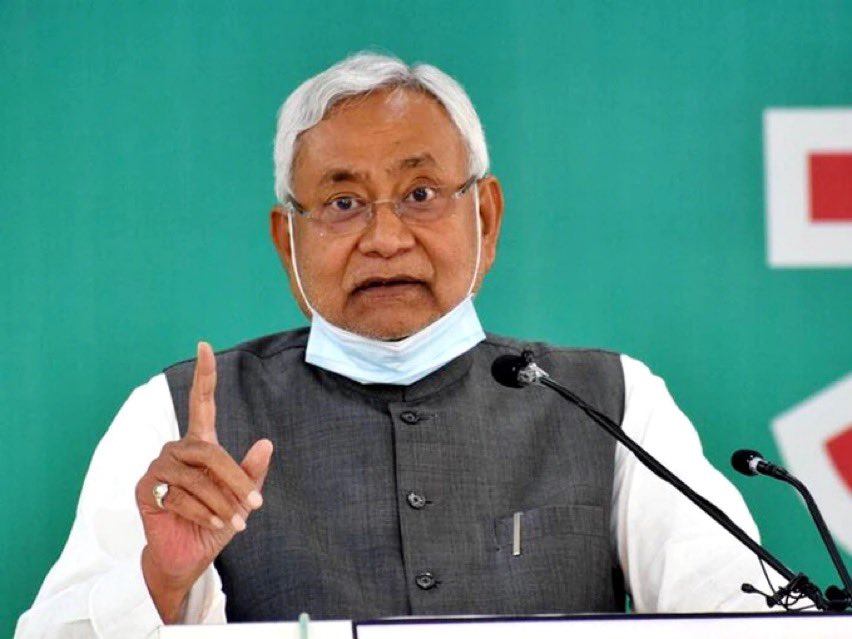 "I have resigned as the CM. All MPs and MLAs of the JD(U) are at a consensus that we should leave the NDA," Kumar told reporters outside the Raj Bhawan.

The resignation came hours after Kumar, at a meeting held with his party MLAs, reportedly said the tie-up with the BJP was "over" as the saffron party was "not giving respect" and "conspiring" against them.

After submitting his resignation, Kumar arrived at the residence of former chief minister Rabri Devi, where he was likely to hold discussions on forming a new government with her son and Rashtriya Janata Dal (RJD) leader Tejashwi Yadav.

The alliance between Kumar and Yadav, which is yet to be officially announced, will be backed by around 160 MLAs, RJD sources told news agency ANI. There will be "no differences on allotment of portfolios", they said. This came shortly after reports claimed that Yadav was adamant on being given the home ministry charge - the portfolio being currently held by Kumar.

Earlier in the day, it was reported that the Congress and Left parties, which had contested the 2020 alliance under the leadership of Yadav, have pledged their support to the JD(U) if it breaks ties with the BJP and forms an alternative government.

In the 243-member assembly, the RJD is currently the single-largest party with 79 MLAs. The JD(U) has 45 legislators, Congress 19 and the CPI(ML)-led Left Front 17.

The RJD sources told ANI that the new government's "first priority" will be to provide jobs to the unemployed youth. The lack of jobs was, notably, the key poll plank used by Yadav in the 2020 assembly elections, Money Control reported.

This will be the second time within a span of seven years when the JD(U) and RJD, considered to be arch-rivals in Bihar politics, will be joining hands to form the government. The two parties, along with the Congress, had contested together in the 2015 assembly polls and formed a coalition government. In 2017, however, Kumar had walked out of the grand alliance and re-united with the BJP.

The JD(U)-BJP-led alliance had won the 2020 assembly polls with a narrow margin, but the seat-count of Kumar's party dropped from 73 in the previous elections to 43. They party later marginally improved its tally to 45 after victory in two bypolls.

A section of the JD(U) alleged that the Chirag Paswan-led Lok Janshakti Party (LJP) was propped up by the BJP to contest aggressively against Kumar's party in the 2020 polls to reduce its electoral tally.

The tensions between the JD(U) and BJP, which kept simmering as the latter's state-level leaders were accused of taking potshots at the CM, reached a breaking-point after JD(U) leader RCP Singh was accused by a section of the party of conspiring to create a split.

The party had, last week, asked Singh to submit details related his properties as it suspected irregularities. This led to Singh announcing his resignation from the JD(U), calling it a "sinking ship" and adding that "Nitish Kumar will never be the prime minister even if he take seven births".

The JD(U) struck back, saying that the party is not a sinking ship but has identified the moles. "Two conspiracies were hatched against Nitish Kumar in recent times — one the Chirag model of 2020, which was responsible for bringing down our Assembly seats to 43. Another had been in the making and was nipped in the bud,” JD(U) president Rajiv Ranjan Singh said.

The BJP, which had so far refrained from mounting an attack on Kumar, accused him of "betraying the public mandate" after he submitted his resignation.

"We fought the 2020 polls together under NDA, the mandate was for JD(U) and the BJP. Despite winning more seats, Nitish Kumar was made the CM due to the pre-poll promise made to him. Whatever happened today is a betrayal of Bihar's public," BJP's state unit chief Sanjay Jaiswal said.