Bharathaa Arts to bring to life a bygone era with Ula, part of Esplanade's Raga series

Singapore-based classical dance studio Bharathaa Arts is set to present the latest dance production, Ula - A Literary Exploration of Womanhood, as part of Esplanade’s Raga series this month. Under the tutelage of Ms Suganthi Kumaraguru and Ms Jeyanthi Balasubramaniam, widely known as the Kesavan sisters, the studio is set to delight Singapore culture lovers with their performance. 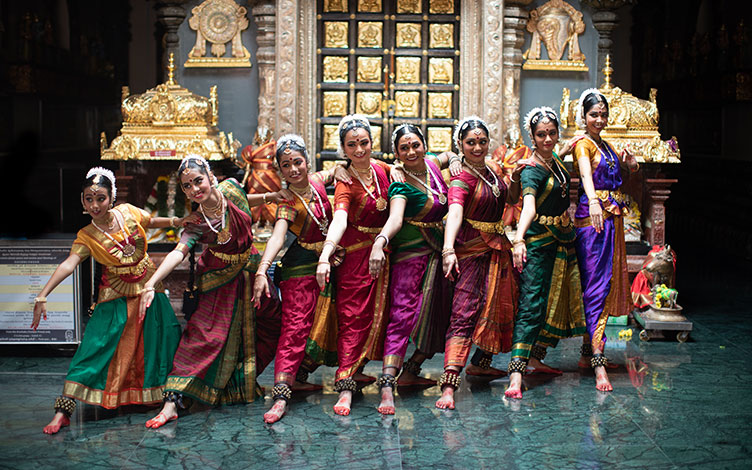 Ula is a genre of devotional Tamil literature that dates back to the Pallava period (275 CE to 897 CE). Photo courtesy: Esplanade

“Over the years as our culture evolved we kept playing with ideas to make Bharatanatyam more relatable to the current generation, without losing the essence of our mythical stories and traditions. And as everyone can relate to the perennial emotion of love, we felt this production, though rooted in a traditional setting, would allow our viewers to relate to them on a personal level,” Ms Jeyanthi, the creative director and guru, Bharathaa Arts, said.

Ula is a genre of devotional Tamil literature that dates back to the Pallava period (275 CE to 897 CE), focused on the veneration of a deity during a temple procession and expressed through the eyes of women.

In this production at the Esplanade Theatre Studio on March 22-23, Bharathaa Arts’ dance production is based on Chokkanadar Ula, which depicts seven images of Lord Shiva in different ornaments and riding a series of vahana (chariots). Each image corresponds to a stage of womanhood. 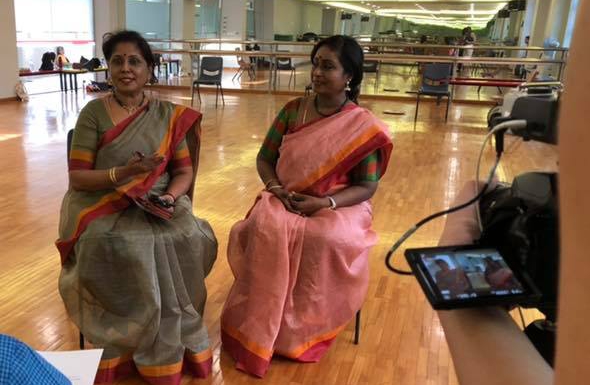 Under the tutelage of Ms Suganthi Kumaraguru (right) and Ms Jeyanthi Balasubramaniam, widely known as the Kesavan sisters, the studio is set to delight Singapore culture lovers with their performance. Photo courtesy: Bharathaa Arts

Originally choreographed by Anjana Anand, this restaging features female dancers of different ages reviving the beautiful ancient literature through Bharatanatyam, with music by Bhagavatulu Seetarama Sarma. Ula is a throwback to a time where the temple was the cultural centre of poetry, music and dance, a statement from Esplanade said.

Connected to India (C to I) caught up with the gurus and creative directors of Bharathaa Arts. Here’s what Ms Jeyanthi has to say about the upcoming performance.

C to I: What are the origins of Ula?*

Jeyanthi Balasubramaniam: Tamil literature has a genre known as Ula literature. This literature dates back to the Pallava period and the poetry describes Lord Shiva on a procession. Hindu temples have a custom of decorating the idol and taking Him around the locality surrounding the temple. This tradition continued as part of the royal court’s practice of bringing the king out with his entourage into the city to meet the people.

In this production, Lord Shiva with his majestic stature goes on the procession with his consort accompanied by musical instruments and an entourage of sages, Gods, and Goddesses. All eyes are on Shiva during the procession, especially the women’s, who stand mesmerized in front of him.

In Tamil literature, the seven stages of a woman are described as Pedumai, Pedhumbai, Mangai, Madandhai, Arivai, Therivai, and Perilam Penn, and they range from the ages of 6 to 40 and see the Lord according to their seven different stages of youth and fall in love with him. Their emotions range accordingly from seeing the Lord as a playmate to a lover, and subsequently to one who gives her the ultimate spiritual guidance in her symbolic quest of the soul for the Ultimate; Tat Tvam Asi. The stages of the lotus is a metaphor for the heart which blossoms from a bud to a fully bloomed flower in this eternal quest.

C to I: Bharathaa Arts are presenting Chokkandra Ula, why did you choose this over others?

Jeyanthi Balasubramaniam: The chosen Ula, ‘Chokkanadar Ula' of Madurai, is a particularly interesting work as it explores the seven different stages of love and admiration of women towards the Lord, just by watching Him from afar.

Over the years, as our culture evolved we kept playing with ideas to make Bharatanatyam more relatable to the current generation, without losing the essence of our mythical stories and traditions. And as everyone can relate to the perennial emotion of love, we felt this production, though rooted in a traditional setting, would allow our viewers to relate to them on a personal level.

The quest first began when my students, sister, and I were chatting about life in general, and we realised that they were preoccupied with so many gripping questions particularly about love and relationships - ‘Why shouldn’t their dance reflect this?’, we thought and asked our students to think of their personal stories and emotions and portray it through this production.

Hence, for us, one of the effective ways we thought of was by weaving personal stories of the performers themselves, by placing the relatable/relevant age groups in the different stages of this production. Where they could relate to and manifest the emotions of love and desire both from their personal experiences and the level of maturity they’re at this point in their lives. 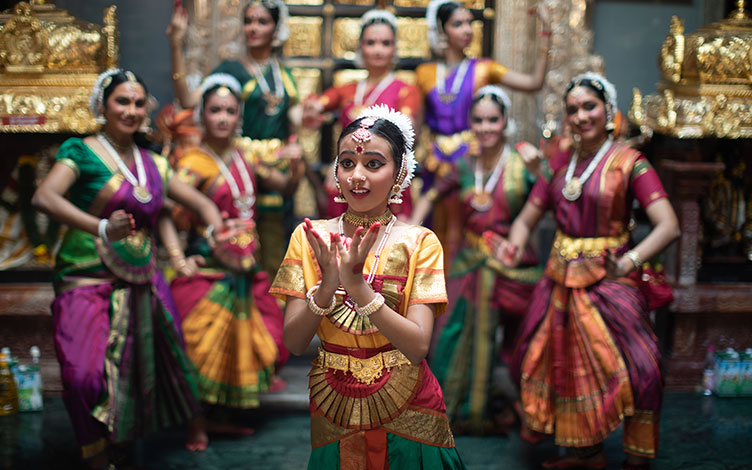 We have a wonderful and committed team that has been working hard to learn their parts and perform them impeccably, says Ms Jeyanthi. Photo courtesy: Esplanade

C to I: What can the audience expect to see in Chokkandra Ula?

Jeyanthi Balasubramaniam: Ula gives a visual scope for dance and allows for variety in group choreography. Each scene will feature a girl of the specified age.

Ula allows for Bharatanatyam compositions to be woven in as the dancers who accompanied the procession in those days would stop at every street corner and perform traditional compositions like the mallari, kautvam and thillana. Reviving the beautiful Ula literature through Bharatanatyam is one way of preserving and popularising ancient Tamil poetry. It also brings to life a bygone era where music and dance was a part of people's lives through the temple as a cultural centre. The spiritual/religious setting and the juxtaposing of human emotions makes the 'Ula' a work which appeals both visually and poetically.

C to I: The production features artists of different ages, is that a challenge? Considering it takes many years to master Bharatnatyam? How do you overcome the challenge?

Jeyanthi Balasubramaniam: I felt that the biggest challenge was trying to get everyone together for rehearsals. With school, work, and family commitments, it was not always possible to get the entire team together. However, the dancers were very accommodating and efficient, practiced regularly at home and ensured that at the very least their weekend schedules matched with the rehearsal timings. This made it easy for us as directors to run the rehearsals smoothly.

With regard to the youngest artist of the team, Shruti, credit also goes to her Mother, who is also an experienced dancer, for helping to manage her school and after school tution schedule with the dance classes, as well as helping to train her at home.

Bharatanatyam is not a dance form that takes many years to master; it is a beautiful art form that takes a lifetime to even understand. Therefore, it does not matter whether the student is a beginner or an advanced student. What matters most of that the dancer understands what she is portraying and expressing to the audience. Regarding this, we have a wonderful and committed team that has been working hard to learn their parts and perform them impeccably.

Tickets for the show are available here.