Boris Johnson is set for an uphill battle as he tries to push for a Brexit deal on the sidelines of the United Nations General Assembly (UNGA) in New York following Britain’s Supreme Court ruling that his suspension of Parliament was unlawful. 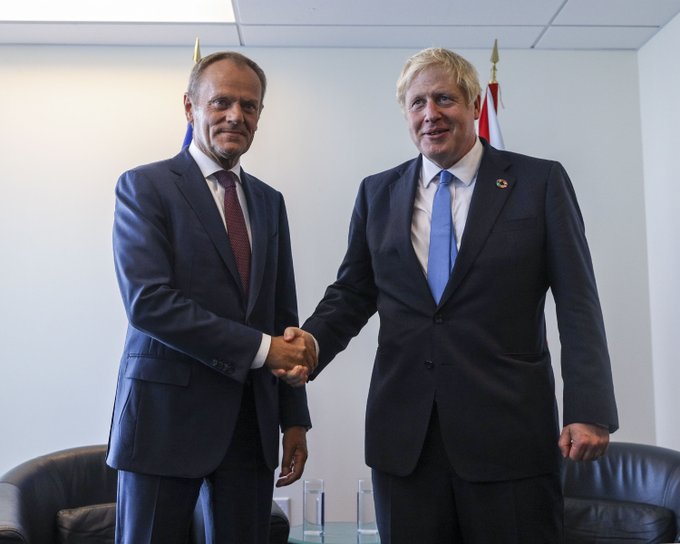 British prime minister Boris Johnson (right) meeting with European Council President Donald Tusk. Johnson is struggling to strike a withdrawal agreement with a skeptical European Union, and the negative verdict from Britain's Supreme Court on Tuesday has been a huge setback to his Brexit plans. Photo courtesy: Twitter/@10DowningStreet

The British prime minister will hold meetings this week with Germany’s Angela Merkel, French President Emmanuel Macron, Irish Prime Minister Leo Varadkar and European Council President Donald Tusk to renegotiate the divorce deal they agreed to with his predecessor, Theresa May, that was rejected three times by Parliament.

Johnson is struggling to strike a withdrawal agreement with a skeptical European Union, and the negative verdict from Britain's Supreme Court on Tuesday has been a huge setback to his Brexit plans.

The ruling has increased the pressure on Johnson from all sides to resign and will weaken his negotiating position in New York even further.

Prior to leaving for New York and before the verdict, Johnson himself did all he could to lower expectations. “I would caution you all,” he told reporters on the plane to the US. “I don’t wish to escalate excessively the belief that there will be a New York breakthrough. We will be pushing ahead but there is still work to be done.”

PM @BorisJohnson sets out his priorities ahead of the @UN General Assembly #UNGA #TeamUK🇬🇧 pic.twitter.com/1mpObS2Avg

He is also scheduled to meet US President Donald Trump on Tuesday as he attempts to advance talks on a free-trade deal.

Johnson has made a “do or die” pledge when he was elected the Conservative Party leader to leave Europe on Halloween, even without a deal if necessary - which would mean defying a law passed by Parliament this month requiring him to seek a delay to January 31 instead if no agreement with the EU was forthcoming by October 19.

The government has said the best way out of the impasse is to negotiate a deal with the EU that British politicians can support. But Johnson won’t be able to do so unless he can show the bloc viable alternatives to the contentious backstop, a measure to keep the Irish border free of checks that Johnson has vowed to remove from any divorce deal because it keeps the UK tied to EU rules.

European Commission President Jean-Claude Juncker made clear the EU is not yet convinced Johnson has a solution to the Irish border. He also made clear where he thought the blame would lie for a no-deal Brexit.

“The EU is in no way responsible for any kind of consequences entailed by Brexit,” he told Sky News. “That’s a British decision, a sovereign decision that we are respecting.”