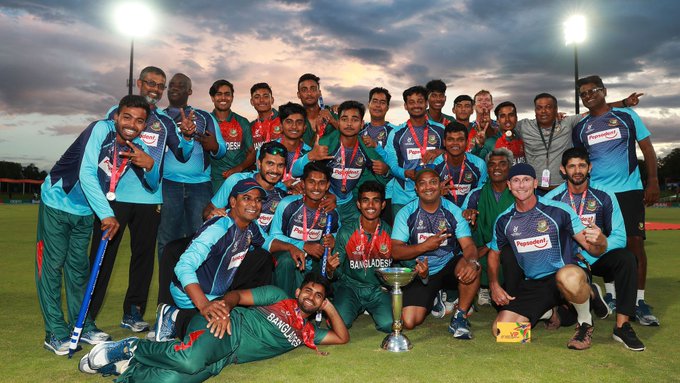 Emon top-scored for Bangladesh with a 79-ball 47 while the captain and wicketkeeper Akbar Ali was not out on 43 from 77 deliveries. Replying to India's meager score of 177, Bangladesh were 163 for 7 after 41 overs when rain stopped play and Bangladesh were 18 runs ahead in terms of the Duckworth-Lewis-Stern (DLS) par score of 145. They knocked off the remaining runs to reach the revised target of 170 with 23 balls to spare.

Bangladesh got a solid start to the run chase, with openers with Emon and Tanzid Hasan adding 50-runs for the 1st wicket before India's leg-spinner Ravi Bishnoi struck in quick succession to dismiss Tanzid, Mahmudul Hasan, Towhid Hridoy and Shahadat Hossain, leaving them reeling at 65 for 4. They suffered a further blow as the set Emon had to leave the field due to cramps.

Captain Akbar Ali tried to consolidate the chase, but Bangladesh lost two more wickets and, at 102 for 6, Emon returned to the crease. The duo stitched a 41-run partnership for the 7th wicket to take the match out of  India's reach before the rain delay drove the final nail in the coffin.

Earlier, India's batting lineup succumbed under pressure as a superb Bangladesh bowling performance led to thedefending champions putting up a subpar 177 in 47.2 overs despite another  fine knock from opener Yashasvi Jaiswal, who has scored at least a half-century in all but one match in this tournament and ended it as top scorer with a whopping 400 runs.

The player of the tournament, Yashasvi Jaiswal.

What an outstanding prospect he is, he's been a thrill to watch all competition.#U19CWC | #INDvBAN | #FutureStars pic.twitter.com/EObOLZUQA1

The new ball bowlers of Bangladesh bowling unit Shoriful Islam (2/31 in 10 overs) and Tanzim Hasan Shakib (2/28 in 8.2 overs) literally stifled the Indians for runs. and, after Yashasvi's dismissal for 88 off 121 balls, India went on to lose their next six wickets for 21 runs in the next nine overs.