‘Baahubali 2: The Conclusion’ emerged as the biggest movie event of the year as a massive crowd converged at Ramoji Film City in Hyderabad on Sunday to witness the pre-release event and audio launch. Renowned Bollywood filmmaker Karan Johar was the chief guest as the cast and crew of the movie praised the organisers and workers for the launch. 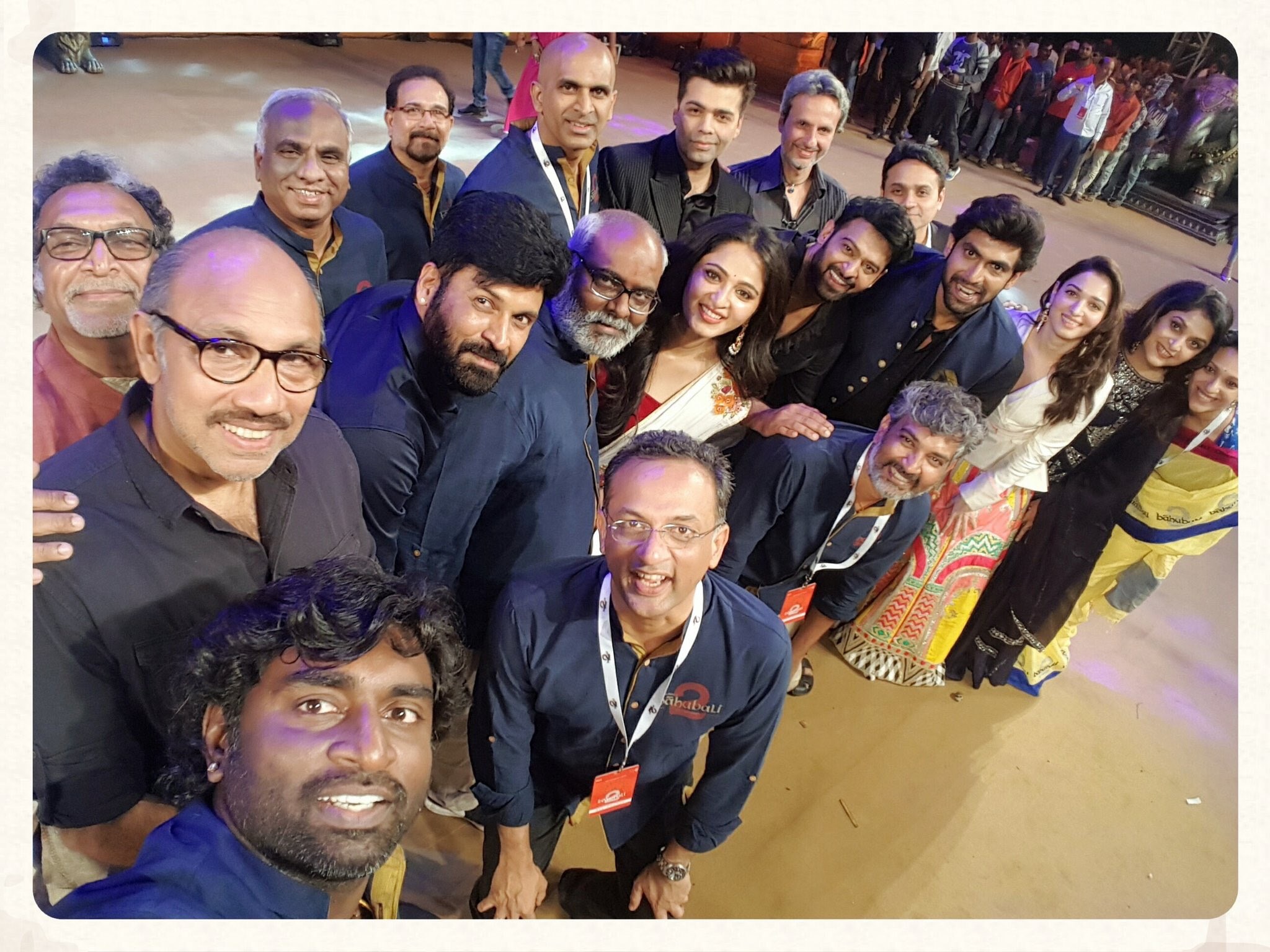 The cast and crew of Baahubali: The Conclusion at the audio launch with .Karan Johar. Photo courtesy: Facebook/Dharma Productions

Speaking at the event, Johar said, "I have said this many times and I'll say this again; Baahubali is probably the proudest Indian film ever made. There's an experience like Mughal-E-Azam and that is Baahubali. To say that SS Rajamouli is the biggest Indian filmmaker is not enough. I would say SS Rajamouli is a global filmmaker in the league of Steven Spielberg, James Cameron, Christopher Nolan and beyond."

"Baahubali is not the conclusion but the beginning of a journey which will inspire thousands of Indian filmmakers. I feel proud that we are a tiny part of Baahubali," he said.

Earlier in the event, Raja Koduri, senior vice president and chief architect of the AMD Radeon Technologies Group, gave a sneak-peek of Baahubali's virtual reality experience - The Sword Of Baahubali, which will premier at the Tribeca Film Festival in late April. In addition, the event itself was broadcast as India's first Live Virtual Reality event.

For the first time ever, watch the #Baahubali2PreReleaseEvent in 360 video!! Its as good as being there!

Around 50 VR experience booths will also be set up at cinema theatres, malls and IT parks in the country, where viewers can get an interactive experience of 3D animated scenes from 'Baahubali-2'.

Rajamouli himself paid a rich tribute to the entire team creating the movie - right from the production team to the costume assistants. "There are so many people whom I want to thank that I don't think I've enough time for it. I couldn't have made Baahubali without the support of the whole team and my family. Every time I scored a hit, it was my wife who kept me grounded and I'll always be indebted to her," Rajamouli said. He was overcome with emotion by the song sung by MM Keeravani, music director, in tribute.

Shobu Yarlagadda and Prasad Devineni, who produced the film, thanked Karan Johar for helping them to conquer the Hindi market.

Tamannaah thanked Rajamouli for believing in her. "Baahubali is a once in a lifetime opportunity. I became more brave as a person after acting in this film," she said. Anushka Shetty, who played Devasena in the film, was all praise for her co-star Prabhas. "He dedicated five years of his life to the film. We are all quite proud of him."

Prabhas, who plays the title character, got a grand entry; suspended in the air with ropes, he was lowered down amidst a huge fireworks display.

"I thank all my fans who patiently waited for the film to release. I hope to do at least couple of films every year from now onwards," Prabhas said.

Baahubali: The Conclusion, the sequel to SS Rajamouli’s smash hit ‘Baahubali’, is set to release in close to 7,000 movie theatres in India alone on April 28, and in selected screens across the world on the same day in IMAX.