At least 80 dead, 350 hurt in massive bomb blast in Kabul

A massive blast today tore through the diplomatic quarter of the Afghanistan capital of Kabul, killing at least 80 people, according to officials. The Interior Ministry said the blast was triggered by a huge quantity of explosives hidden in a truck set off during the peak of the morning rush hour on a busy road in Wazir Akbar Khan area of the city. 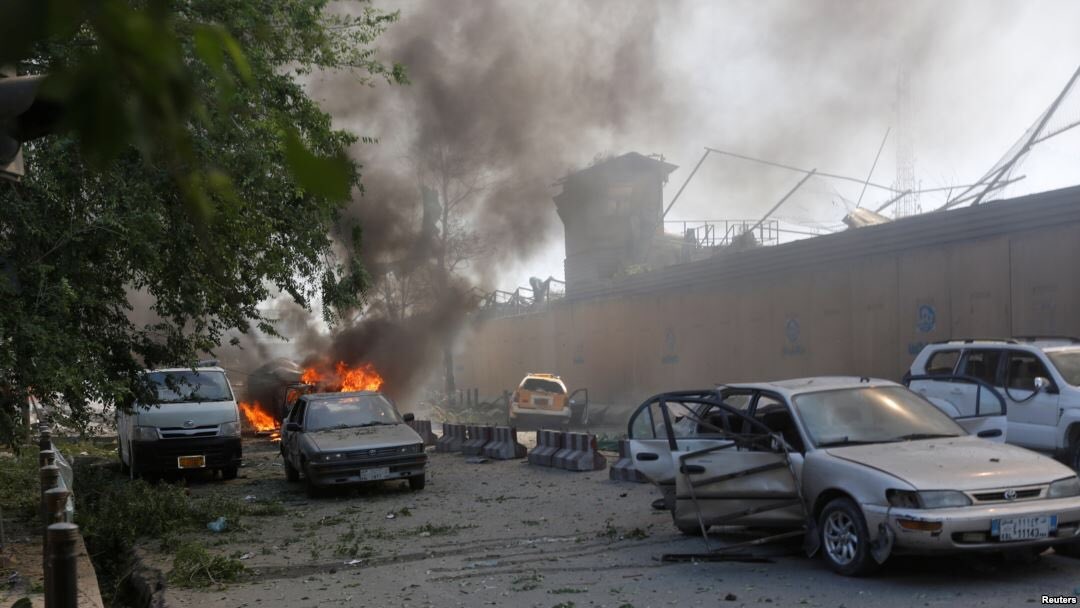 Kabul was left reeling after the explosion. Photo courtesy: Twitter

"Unfortunately the toll has reached 80 martyred (killed) and over 300 wounded, including many women and children," said Ministry spokesman Waheed Majroh, adding the figures would continue to climb as more bodies are pulled from the debris.

Afghanistan has been suffering from a surge of attacks from the Taliban movement since it declared a new spring offensive, including spectacular attacks on the once secure capital. There have also been a string of attacks claimed by the rival Islamic State group.

This blast blew out windows across the city and set dozens of cars ablaze. The target was unclear, but the bomb went off near the Germany Embassy and the nearby French and Chinese embassies were reportedly damaged, according to Reuters news agency.

“These heinous acts go against the values of humanity as well values of peaceful Afghans,” said a government statement. “These attacks also demonstrate the extreme level of atrocity by terrorists against innocent civilians.”

By God's grace, Indian Embassy staff are safe in the massive #Kabul blast.

Witnesses described dozens of cars choking the roads as wounded survivors and panicked schoolgirls sought safety. Men and women struggled to get through security checkpoints to search for loved ones.

Indian Prime Minister Narendra Modi was quick to condemn the blast from Spain. He also tweeted his support for Afghanistan.

India stands with Afghanistan in fighting all types of terrorism. Forces supporting terrorism need to be defeated.

US troops in Afghanistan, number about 8,400 now, and there are another 5,000 from NATO allies. They mainly serve in an advisory capacity - a far cry from the US presence of more than 100,000 six years ago.

The blast was the latest in a long line of attacks in Kabul. The province surrounding the capital had the highest number of casualties in the first three months of 2017 due to multiple attacks in the city, with civilians bearing the brunt of the violence.

There was no immediate claim of responsibility, but the attack came as the resurgent Taliban are stepping up their annual "spring offensive". The Taliban denied responsibility in a statement, saying the movement condemned any such untargeted attacks that caused civilian casualties.

The Islamic State group has also claimed responsibility for several recent bombings, including a powerful blast targeting an armoured NATO convoy that killed at least eight people and wounded 28 on May 3.

In March last year, the Indian consulate in Afghanistan's Jalalabad city was attacked by terrorists, leading to the death of nine people.