There have been 700 reported cases of dislodged tiles in the first half of January this year, said Housing and Development Board (HDB) of Singapore. 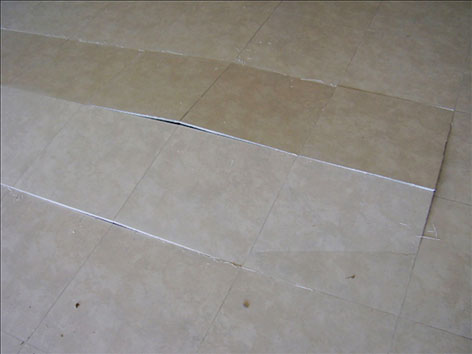 There have been 700 cases of dislodged floor tiles reported in Singapore’s homes. Photo courtesy: hdb.gov.sg

HDB said, “The increase in incidents is consistent with the experience of previous years during the colder months. Dislodgement of tiles occurs due to natural deterioration and differential thermal expansion or contraction of the tiles, which results in a loss of adhesion between the tiles and the screed surface over time.”

It also said that significant changes in temperature can “cause more stress to be built up” beneath the tiles, contributing to the loss of adhesion.

People of Singapore became quite concerned as several cases of popping of the floor tiles were reported in several flats of the island nation due to current weather conditions.

HDB has assured the house owners that they will help in repairing of the damaged tiles. It said, “For units with tiles laid by HDB, we will continue to offer goodwill repairs for the tiles up to 15 years.”

It added, “This exceeds the industry standard of a one-year Defect Liability Period. HDB will also assist all affected residents to inspect their flats, lay protective sheets over the affected tiles and provide a list of repair contractors whom they can engage.”