Indian-origin Canadian Jagmeet Singh is likely to emerge as the “kingmaker” after his New Democratic Party (NDP) won 24 seats in the general election where Prime Minister Justin Trudeau's Liberal Party just about held onto power in the nail-biting polls. 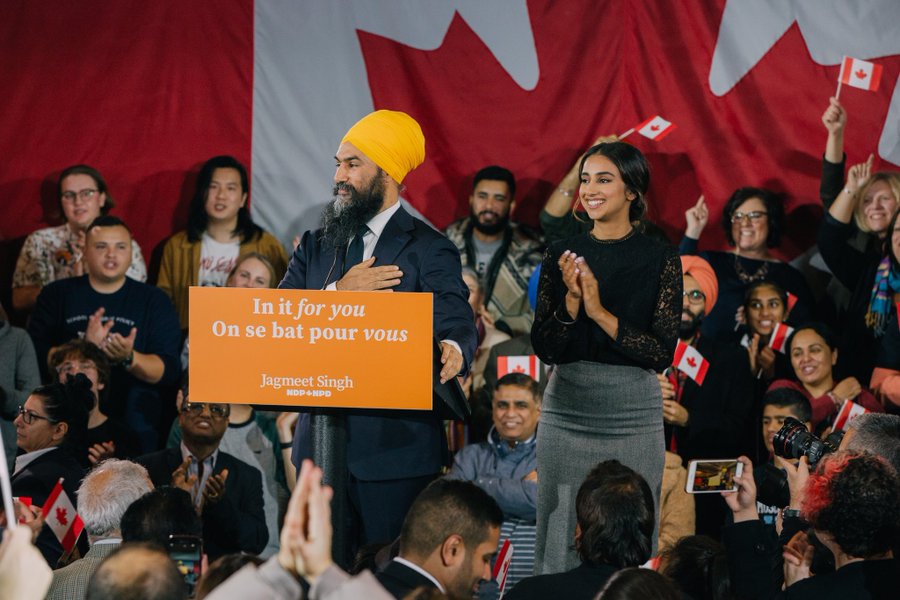 Jagmeet, the first non-white leader of a national political party, in a celebratory speech on Tuesday said his party will now be "working hard" to deliver on the "priorities that Canadians have". Photo courtesy: Twitter/@theJagmeetSingh

Trudeau is set to form the government once again, albeit as a weakened minority one. In the just-concluded Canadian general election, the results of which were declared on Tuesday, the Liberal Party bagged 157 seats, the opposition Conservative 121, Bloc Quebecois 32, NDP 24, Green Party 3 and one Independent.

Jagmeet, the first non-white leader of a national political party, in a celebratory speech on Tuesday said his party will now be "working hard" to deliver on the "priorities that Canadians have".

The NDP too suffered a setback however - its 24 seats in these elections is 50 per cent less than the seats it won in 2015. The party, led by Thomas Mulcair, had won 44 seats, becoming the third-largest party in the House of Commons in 2015.

A leftist former criminal defence lawyer, Jagmeet Singh was elected in 2017 to lead the New Democratic Party (NDP) and is backed by voters disenchanted with Prime Minister Trudeau and Conservative Andrew Scheer.

As many as 20 Indian-origin politicians have scripted history by making it to the Canadian parliament — House of Commons — in this year’s general election. Of these, 19 are Punjabis.

Ontario alone has sent as many as 12 Indo-Canadian leaders to parliament, while British Columbia (BC) has elected four, Alberta three and Quebec one (Liberal Party’s Anju Dhillon). Like last time, Liberal Chanderkanth Arya of Karnataka is the lone non-Punjabi Indian to make it from Napean (Ontario).

The Punjabi community in Canada has clearly supported the Liberal Party, repeating the 1993 scenario. As many as 14 of the 18 Punjabi candidates fielded by the party registered wins.