ZEE5 Global's content gained another feather in its cap with its Zindagi original show 'Qatil Haseenaon Ke Naam' notching up yet another win.

The desi noir show was named the ‘Best Anthology Episode/Best Single Drama or Telemovie’ among all of the Indian nominees at the Asian Academy Creative Awards 2022, making it the national winner at one of Asia-Pacific’s most prestigious awards for creative excellence. 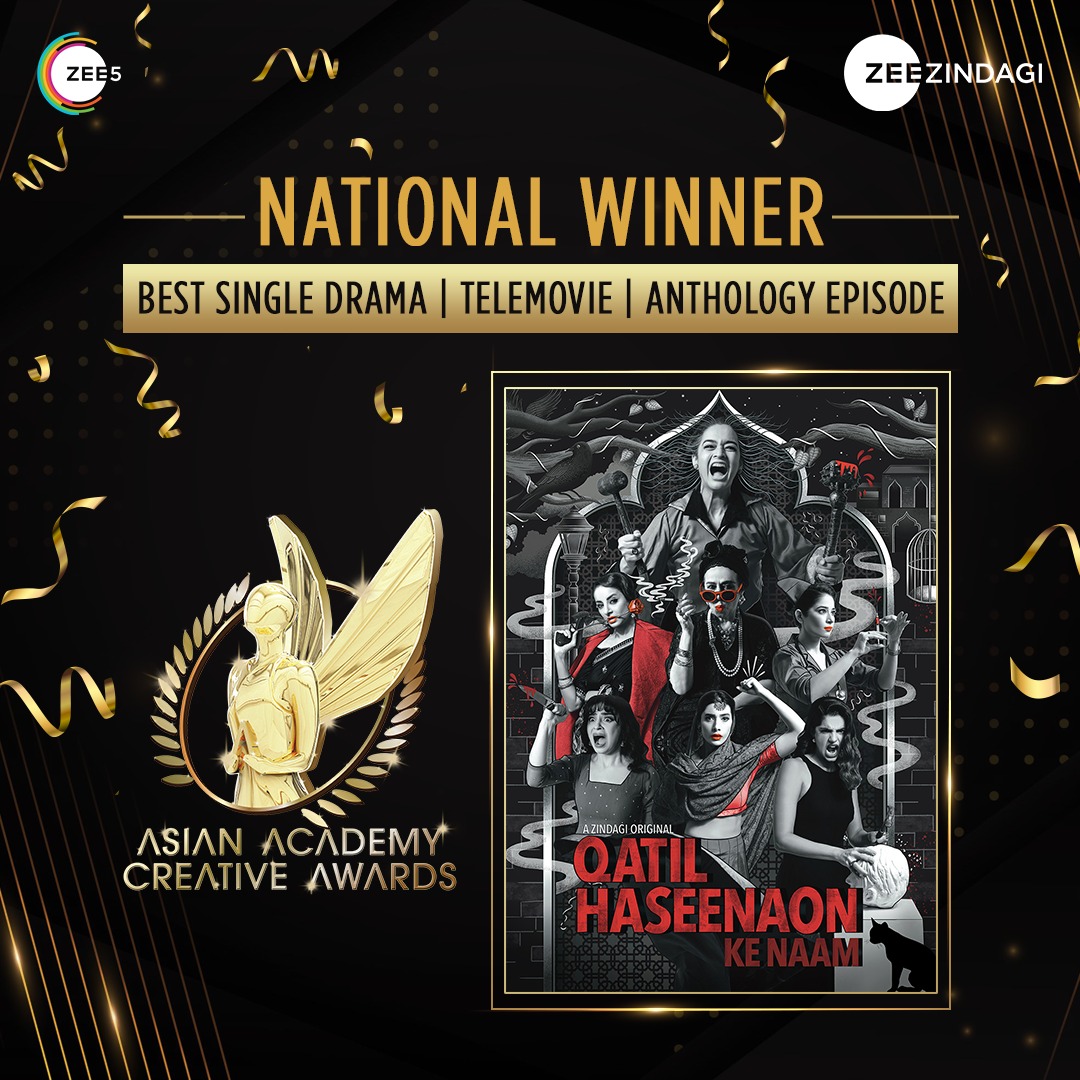 Archana Anand, Chief Business Officer, ZEE5 Global said, "At ZEE5 Global, it is our constant effort to bring alive captivating and distinctive narratives that give our global viewers a look into modern day South Asia. Qatil Haseenaon Ke Naam is one such powerful narrative. We are thrilled to be recognized globally at the Asian Academy Creative Awards 2022 for this series that has resonated with viewers worldwide.”

Talking about the big win Shailja Kejriwal, Chief Creative Officer – Special Projects, Zee Entertainment Enterprises Ltd said, “Meenu’s vision and take on desi noir is unique. Our discussions on female gaze, desire and rage were empowering as well as liberating. Making the show with a predominantly female cast and crew, all very vocal women really helped cement Meenu’s vision. I must mention our DP Mo Azmi whose talent is not only precious but his being an ally through and through was just what this project needed. This recognition by the Asian Academy Creative Awards encourages us to experiment with more genres and perspectives. We look forward to meeting all the incredible storytellers and winners at the awards night in December.”

“The journey for this show started with the desire to shift the perspective on an age-old story and genre by giving the reign of the storytelling to the women. I see this recognition by the jury of the Asian Academy Creative Awards as a sign of our success in doing so. More power to all the women storytellers, filmmakers and creatives making these journeys around the world and to winning.” Meenu Gaur, Creator and Director of Qatil Haseenaon Ke Naam added.

Since its release, the series is winning hearts and recognition at various forums; it recently won the ‘Best Programme Title Sequence’ at the Promax India Awards 2022 and ‘Best Thriller Show on web’ at the ET Brand equity Spott Awards 2022.

Written by Farjad Nabi and Meenu Gaur, the show is set in a neighbourhood rife with secrets and gives a glimpse into what happens when women decide to take charge of their destiny and not kneel before situations and society. The series features an eclectic ensemble cast including Sanam Saeed, Sarwat Gilani, Samiya Mumtaz, Faiza Gillani, Mehar Bano, Beo Raana Zafar, Eman Suleman, Saleem Mairaj, Ahsan Khan, Osman Khalid Butt and Sheheryar Munawar.