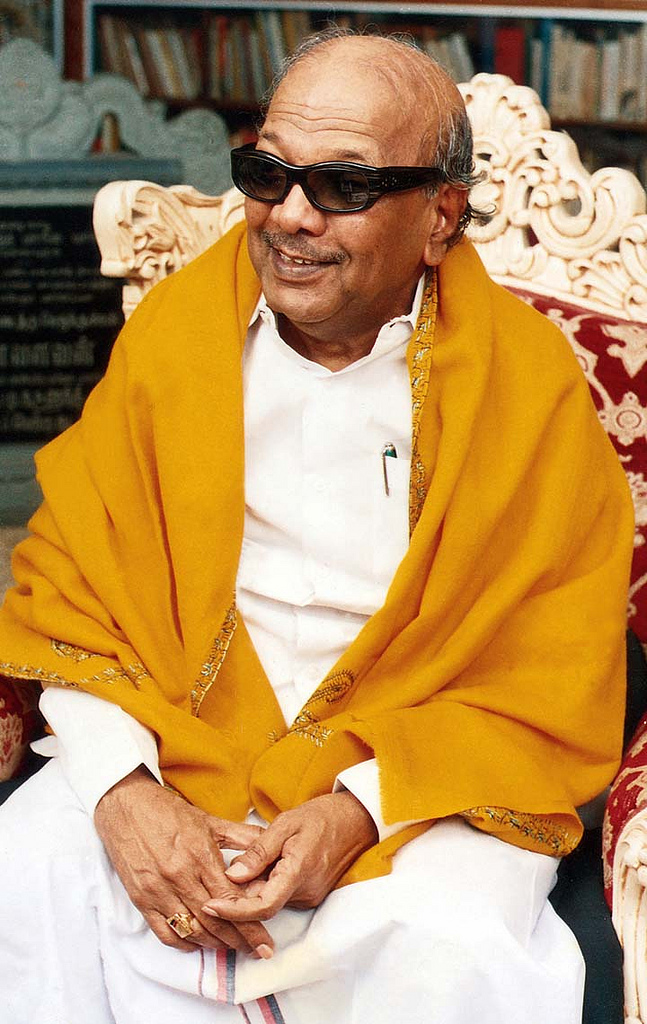 The DMK leader had been hospitalised last week and was being treated for various ailments. Photo courtesy: Flickr/np ramkumar

"Despite our best possible efforts by our team of doctors and nurses to resuscitate him, he failed to respond. We profoundly mourn the loss of one of the tallest leaders of India and we share the grief of family members and fellow Tamilians worldwide," the hospital said in a statement.

The DMK leader had been hospitalised last week and was being treated for various ailments. He had suffered an episode on July 29 as well. Huge crowds of party supporters and workers gathered outside the hospital and the Tamil leader's residence to mourn his passing. A state of alert has been announced by the state police commissioner.

Tomorrow was declared a school holiday in the Indian state of Tamil Nadu and the state will observe a seven-day mourning period.

Prime Minister Narendra Modi said Karunanidhi "stood for regional aspirations as well as national progress. He was steadfastly committed to the welfare of Tamils and ensured that Tamil Nadus voice was effectively heard."

Deeply saddened by the passing away of Kalaignar Karunanidhi. He was one of the senior most leaders of India.

We have lost a deep-rooted mass leader, prolific thinker, accomplished writer and a stalwart whose life was devoted to the welfare of the poor and the marginalised. pic.twitter.com/jOZ3BOIZMj

Loved by the Tamilian people, Kalaignar strode the stage of Tamil politics, like a colossus, for over 6 decades. In his passing, India has lost a great son. My condolences to his family as also to the millions of Indians who grieve for their beloved leader tonight.#Karunanidhi

The DMK's Kalaignar, meaning scholar of arts, was born Dakshinamurthy on June 3, 1924, in Thirukkuvalai, a village in present-day Tamil Nadu's Nagapattinam district. He would later credit "confidence" and "strong determination" for his rise from humble beginnings to high office.

Karunanidhi's life in politics began early. When he was just 14, he joined the Justice Party and a fledgeling anti-Hindi agitation. When CN Annadurai split with EV Ramaswamy to form the DMK, Karunanidhi was one of its founding members. In a career spanning half a century, he never lost an election.

A shrewd political mind wasn't Karunanidhi's only claim to fame; he was as potent with the pen as he was from the pulpit. In the 1950s, he began writing dialogue and screenplays for Tamil films.