The Last Picture: A gripping short film by budding filmmaker on Filmwallas.com

Before launching Filmwallas.com, we were looking for some talented up and coming filmmakers who could make a few films for our platform.

We met a couple of filmmakers in this connection (through one of our mentors), and one of them was Tejas Joshi.

Tejas is a Nashik-born filmmaker who lives in Mumbai. He shared a couple of ideas with us. Some of them were very futuristic and would have required a good budget and VFX. We settled for a simple story --an ode to the fast disappearing 'film roll' in an increasingly digital world.

Once the story was approved by us, Tejas went on to find his cast and crew and shot his film in a house located in a vineyard.

The Last Picture synopsis
'The Last Picture' is a short film set in near future, when film rolls have completely vanished from the market. There are no film rolls available in shops, online stores, auctioning sites etc. The world has moved over film rolls.

The story revolves around Akash an advertiser who has a vintage camera, which is quite dear to him and has been using it for ages. He clicks only significant moments of his life on that camera as the film roll in it is probably the last film one. The 36-frame roll is going for years. But, now only one last shot is left and which he has saved for a very special moment.

But then, something happens... Will he be able to capture that last shot? What will happen to that film roll?

Watch it and know yourself! 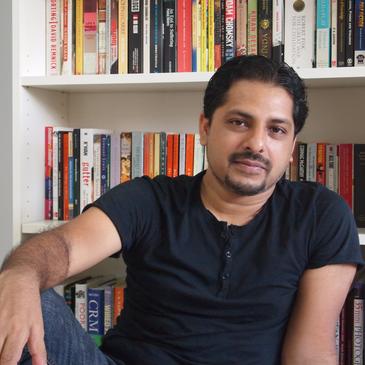 Zafar Anjum is a journalist, writer, media consultant, filmmaker and entrepreneur who lives and works in Singapore. He has been a journalist and writer for over 19 years and has worked with reputed media companies such as Fairfax Business Media (Australia), Executive Networks Media (Singapore), MediaCorp (Singapore) and Encyclopaedia Britannica (India). Zafar is the author of many bestsellers such as The Resurgence of Satyam (Random House India, 2012), Startup Capitals: Discovering the Global Hotspots of Innovation (Random House India, December 2014), and Iqbal: The Life of a Poet, Philosopher and Politician (Vintage Books/Random House India, 2014). He is also the founder of two startups, Kitaab and Filmwallas.