Four Indian Americans will be or, would have closely contested to be, in the US Congress today. Arguments can ensue on whether it was Bhagat Singh Thind or Dalip Singh Saud who laid the foundation for this day in the year 1936 or 1957, depending on how you look at it. 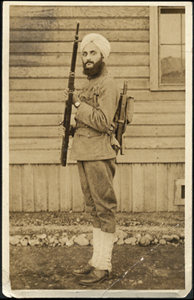 Thind, a lecturer, scientist and writer on spirituality, can be called the first Indian American. He applied for US citizenship after the end of World War I, having fought for the country as an American soldier. But the first battle he fought with the US government did not succeed. He finally earned US citizenship in 1936.  In his time, the idea of a brown-skinned Indian getting a US passport was in itself a major achievement. In a land where Indians up until then only meant the natives living in reserves, this was a pioneering signpost.

Saund, on the other hand, went further and became the first Indian American to become a Congressman. He served under presidents John F Kennedy and Lyndon Johnson. He first arrived in the US to study Agriculture in the University of California, Berkeley, and later played an important part in lobbying to allow South Asians to become naturalized citizens of America, ultimately benefitting from the passing of the Luce-Celler Act of 1946 that allowed a quota of 100 Indians to immigrate to the US every year. In November 1955, he fought for the House of Representatives and went on to become the first Indian American Congressman. The game, it seems, had just begun. 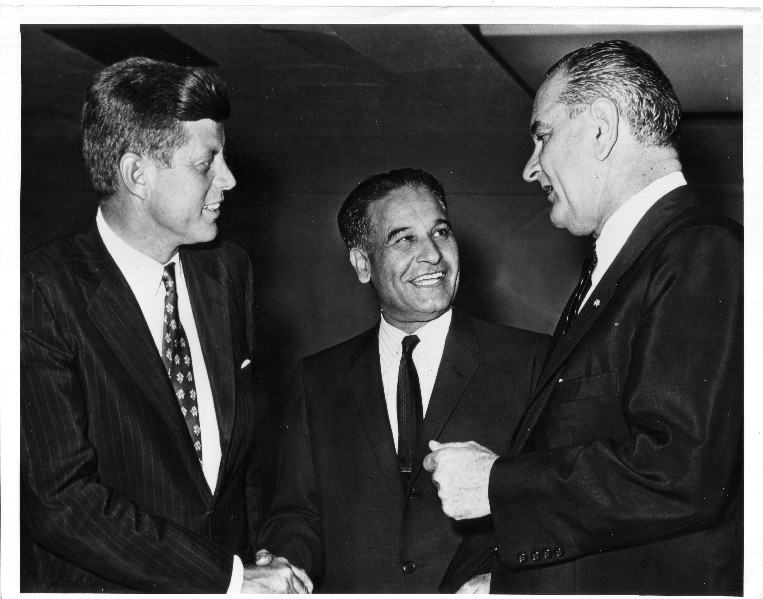 The tidal surge of Indian Americans

A surging population of ethnic Indians, immigrants and their descendants, increasingly empowered by higher education, improving financial conditions and a tendency to take positions of leadership and prominence, show that Indian Americans have grown from the fringe to the mainstream in America.

USINPAC, a bipartisan political action committee, that encourages Indian American participation in US politics, has a list of 48 candidates they have supported over the years, on their site. A quick look at the demographics of Indian Americans also points in the direction of their greater political involvement in the future.

According to the respected fact-digger, the Pew Research Centre, Indians form 18.4 per cent of the Asia American group. Other dominant Asian nationalities are Chinese, Filipino, Vietnamese, Korean and Japanese, in order of the population size. Indians are the second largest after Chinese. Indian Americans lead all other groups by a significant margin in their levels of income and education. Seven-in-ten Indian-American adults aged 25 and above have a college degree, compared with about half of Americans of Korean, Chinese, Filipino and Japanese ancestry, and about a quarter of Vietnamese Americans. 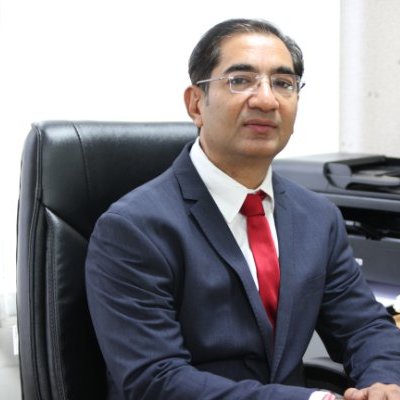 Sanjay Puri, Chairman and Founder, USINPAC on an email reply to Connected to India, said, "From Medicine to technology to the political sphere Indian Americans are now finding a way to give back to their country. The 2nd generation of Indian Americans are now running effective campaigns for Congress, Senate and also Governor races. We are seeing the beginning of what promises to be a tremendous growth in activism by Indian Americans on the both sides of the political aisle and this is good for the Indian American community and it is good for the United States as these very talented candidates have a lot of expertise and experience to share to make America the greatest country on Earth."

According to the respected fact-digger, the Pew Research Centre, Indians form 18.4 per cent of the Asia American group. Other dominant Asian nationalities are Chinese, Filipino, Vietnamese, Korean and Japanese, in order of the population size. Indians are the second largest after Chinese. Indian Americans lead all other groups by a significant margin in their levels of income and education. Seven-in-ten Indian-American adults aged 25 and above have a college degree, compared with about half of Americans of Korean, Chinese, Filipino and Japanese ancestry, and about a quarter of Vietnamese Americans.

While "Hindus for Trump" is now a hot slogan in the US, this terribly produced video will do more damage than good for the blustering Republican leader.

If Pramila Jaypal, Ro Khanna, Raja Krishnamoorti and Kamala Harris were to win their elections they would be joining Dr Ami Bera, the Sacramento County representative, who is currently the only Congressman of Indian origin -- assuming Bera keeps his seat. This would take the number of Indian Americans in Congress to four, highest number so far.

Here is a brief look at the 'Likely Five' and what they stand for:

Pramila Jaypal whose campaign is considered historic due to the diversity of the community she serves and the number of people reached Photo: Pramila for Congress

An American ‘Aam Aadmi’ politician, Pramila Jaypal’s campaign is considered historic due to the diversity of the community she serves and the number of people she has reached.  Pramila, 51, is running for Congress in Washington's 7th District: encompassing most of Seattle, all of Vashon Island, Edmonds, Shoreline, Kenmore, and parts of Burien and Normandy Park.

“I think that concept of the American Dream is slipping away far too quickly for most people; they don’t really believe it exists. The middle class has shrunk, we have way more people in poverty and the wealth/income concentration at the very top is stifling the opportunities for everybody else. I’m speaking about immigrants but also people of color, women, and the poor and the vulnerable.” Pramila Jaypal.

The feminist and activist has been working to ensure uninsured poor women access contraception. She has also been fighting for immigration reform and is working on a bill to forgive college debt!

Harris, 52, Democrat, daughter of an Indian mother and an African American father has won two state-wide elections for Attorney General in 2010 and 2014. A lawyer politician who fights for a range of issues like civil rights, social justice, gender equality, end of discrimination against LGBT community among others makes her immensely popular. Currently, the attorney general of California has a real shot at becoming the first Indian American woman senator. 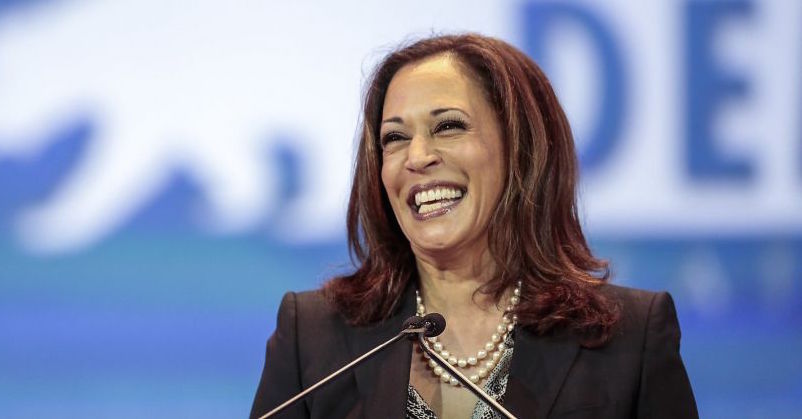 She is very likely to laugh away to victory as she was already on a 24-point lead in the final Field Poll couple of days back. 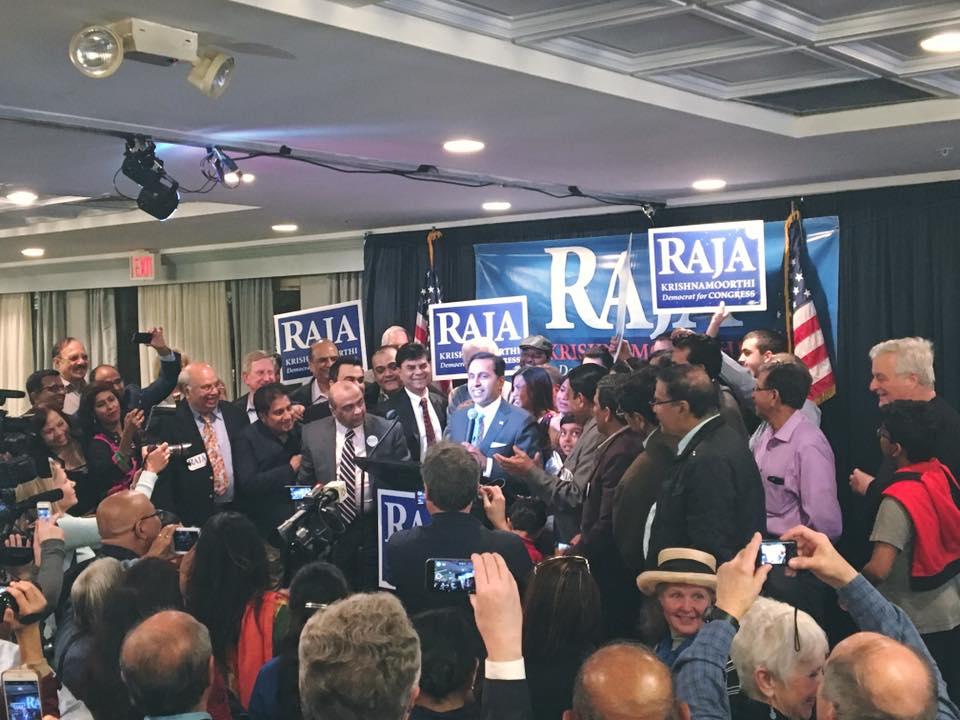 Raja Krishnamoorthi on the day he was nominated to be Democratic Party's Candidate for Congressman of Illinois' 8th District Photo: Raja for Congress

Raja Krishnamoorthi, 43, is the Democratic Party's Candidate for Congressman of Illinois' 8th District. The congressional district covers parts of Cook, Du Page and Kane counties.  Krishnamoorti won the three-way Democratic primary with a 60% majority. He owes his popularity to his five-point plan called ‘Working Families Agenda’, which wants to improve their economic status.

He wants to raise the Federal minimum wage to $10 an hour from the current $7.25, adjusted for inflation, offer paid maternity leave and provide annual paid leave for workers attending to family members in need of medical attention. He is also pleading for higher tax credits to help those raising children.

Ami Bera: No Budget No Pay 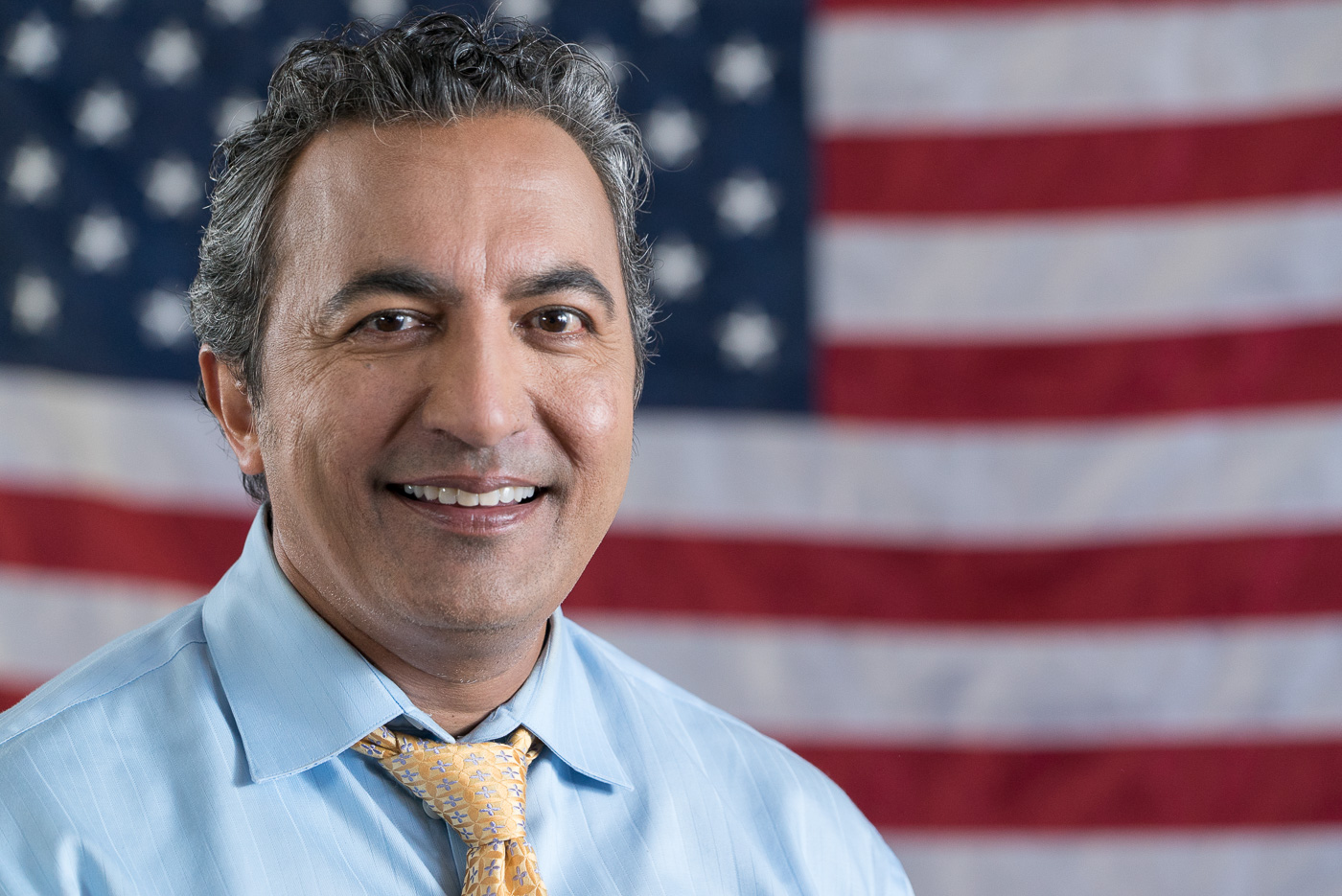 Dr Ami Bera, 51, a first generation Indian American Congressman from Sacramento County, California, has fought his own kind to help citizens. Bera questioned the pay that Congressmen receive while delaying and debating budgetary issues. He voted for the Bipartisan Budget Agreement of 2015 that has the potential to create 340,000 jobs in 2016 alone.

“Core to our job as members of Congress is passing a budget. That’s why the first bill I introduced and helped pass when I came to Congress was the "No Budget, No Pay" Bill that says that if lawmakers don’t pass a budget they shouldn’t get paid," Bera says.

The Democratic party member strives towards achieving a uniform consensus amongst political parties for quick progress in the process of lawmaking. 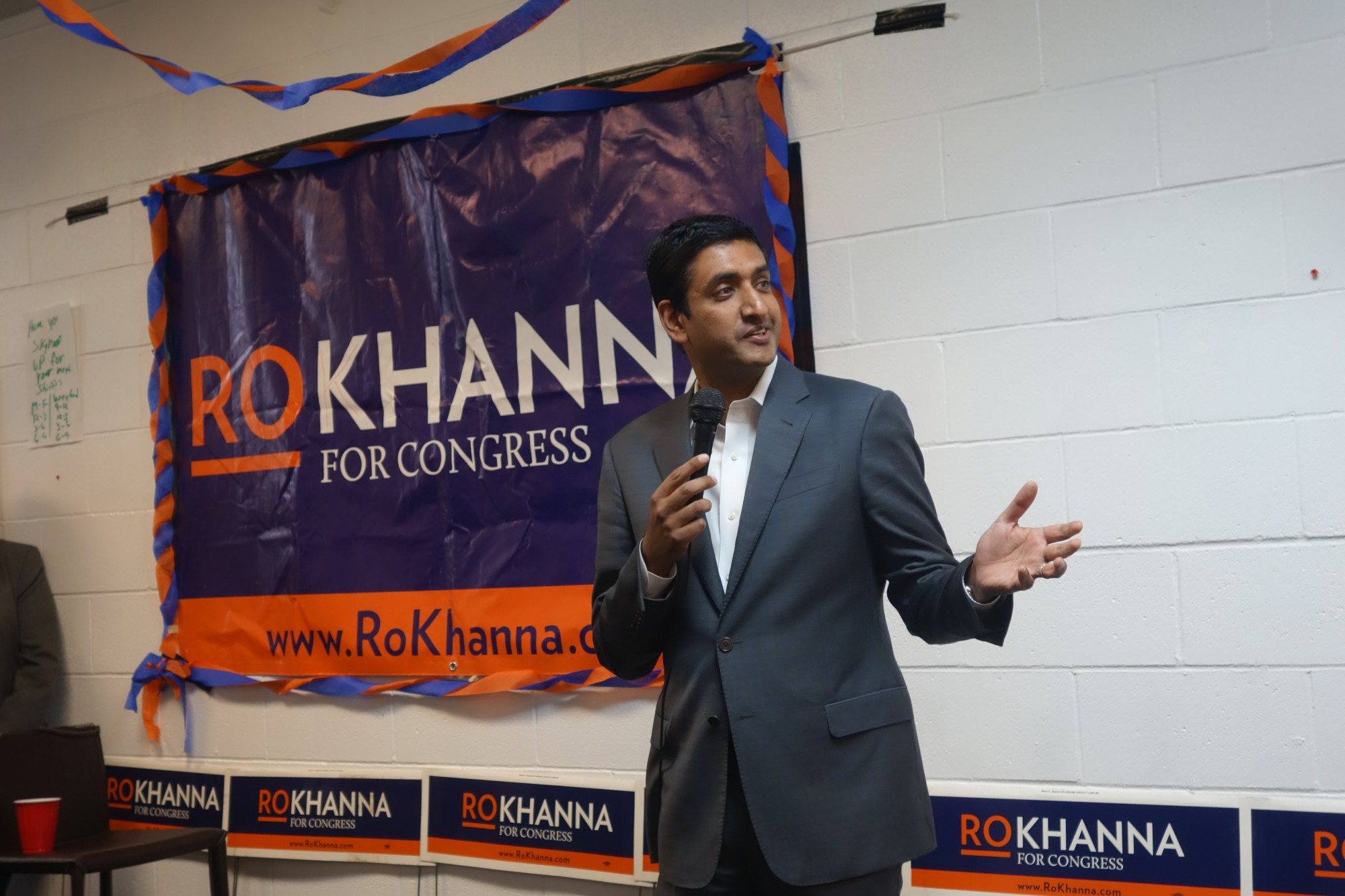 Rohit "Ro" Khanna has served as the Deputy Assistant Secretary in the United States Department of Commerce under President Barack Obama. Photo: Rokhanna.com

Rohit "Ro" Khanna has served as the Deputy Assistant Secretary in the United States Department of Commerce under President Barack Obama.

Khanna is running a close contest to represent California as a part of the Democratic Party in this year's elections. Apart from seeking tax incentives to push forward the Silicon Valley agenda, he wants to boost manufacturing in the country through technological development. You could call it America's answer to Prime Minister Narendra Modi's, "Make In India" campaign.

Khanna has traveled the length and breadth of the country, meeting small companies, trying to convince them to manufacture in America. He proposes a tax structure to ensure that domestic manufacturing is lucrative, which can in turn create jobs for Americans. Manufacturing jobs typically earn 20% more than other comparable jobs for American workers.

Khanna wants to create 3 million manufacturing jobs in America and is also pushing for skill-building to aid manufacturing powered by emerging technologies.

If 2016 is a sign of things to come, US politics will see more Indian Americans in the future and perhaps an Indian American President, hopefully, in my lifetime.