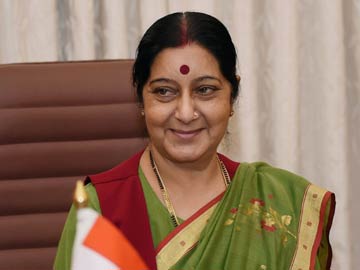 “What US President Trump has said is not the reality… India signed the Paris climate pact not because of pressure from any country or due to lure of money. Our signature in the pact was not because of greed, it was not because of fear. We signed it due to our commitment to protecting the environment… India will continue to be part of it irrespective of whether the US remains in it or not,” Swaraj told reporters while speaking on three years of the Modi government.

“This commitment is 5,000 years old. We worship rivers, trees and mountains. This is India’s ethos, it is our cultural heritage. If someone says we signed the pact due to lure of money and pressure from someone, it is wrong. I reject both these allegations,” she said.

On the H1B visas, Swaraj said while nothing has changed so far in the US, there were concerns and New Delhi was in touch with the US administration and lawmakers. “When the Prime Minister goes to the US to meet President Trump, he will raise this issue with him,” she said.

She also sent Pakistan a tough message, blaming it for creating conditions unsuitable for any gesture by the Prime Minister or initiative by the Indian government to resume the dialogue process.

She said no meeting has so far been scheduled between Prime Minister Modi and his Pakistan counterpart Nawaz Sharif on the sidelines of the Shanghai Cooperation Organisation (SCO) Summit in Astana, Kazakhstan on June 8-9. But sources said that possibility could not be completely ruled out.

Rejecting any “flip-flop” in the government policy on Pakistan, Swaraj said India is clear that “it wants to hold dialogue, resolve all issues bilaterally without mediation from any third country, organisation or anyone else. But at the same time, terror and talks cannot go together.”

Asked about remarks of a Pakistan law officer that Islamabad will take the Kashmir issue to the International Court of Justice which India approached in the Kulbhushan Jadhav case, Swaraj said, “Pakistan cannot take Kashmir issue to ICJ. The Shimla agreement and Lahore declaration are very clear on the Kashmir issue that it can only be resolved bilaterally. The two countries are bound by these bilateral agreements.”

On China’s airspace violation in Uttarakhand, she said while there used to ground-level incursions from both sides since there is no demarcated boundary, this is the first time an airspace incursion has taken place. “I cannot tell you when and where this issue will be raised, but it will be raised with the Chinese government, 101 per cent,” she said.

On China blocking India’s bid to become a member of the Nuclear Suppliers Group, she said India has asked all friends of China, including Russia, to impress upon them India’s candidature, and expressed the hope that India will become a member one day. “Aaj nahin toh kal, kal nahin toh parson… hum honge kaamyab,” she said.