Indian Minister of External Affairs Sushma Swaraj arrived here in Singapore yesterday to attend the much awaited ASEAN-India Pravasi Bhartiya Divas, after visiting Thailand and Indonesia as a part of New Delhi's Act Easy Policy push in the region. 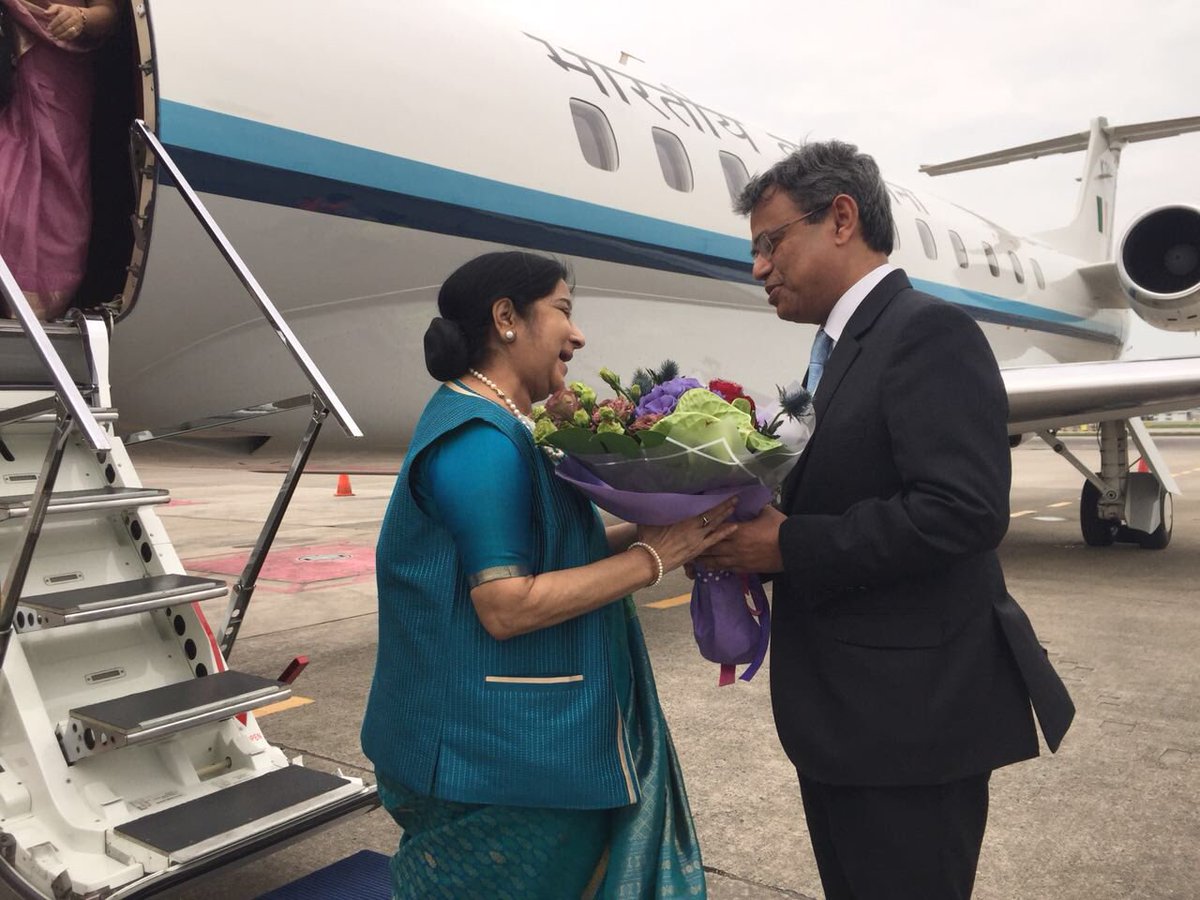 The big-ticket event will have extensive interactions with PIO delegations from the region.

"She will have bilateral meetings with the leaders in Singapore and also interactions with PIO(People of Indian Origin) delegations from ASEAN countries, who are participating in the PBD. The regional PBD is a large scale event covering a wide range of sectors including political relations, economic and investment, tourism and culture, connectivity, start-ups, science & technology, etc. PIO delegations from all ASEAN countries, including ministers, eminent personalities, business and socio-political leaders are participating in the event," the Ministry of External Affairs (MEA) as said in a pre-departure statement. 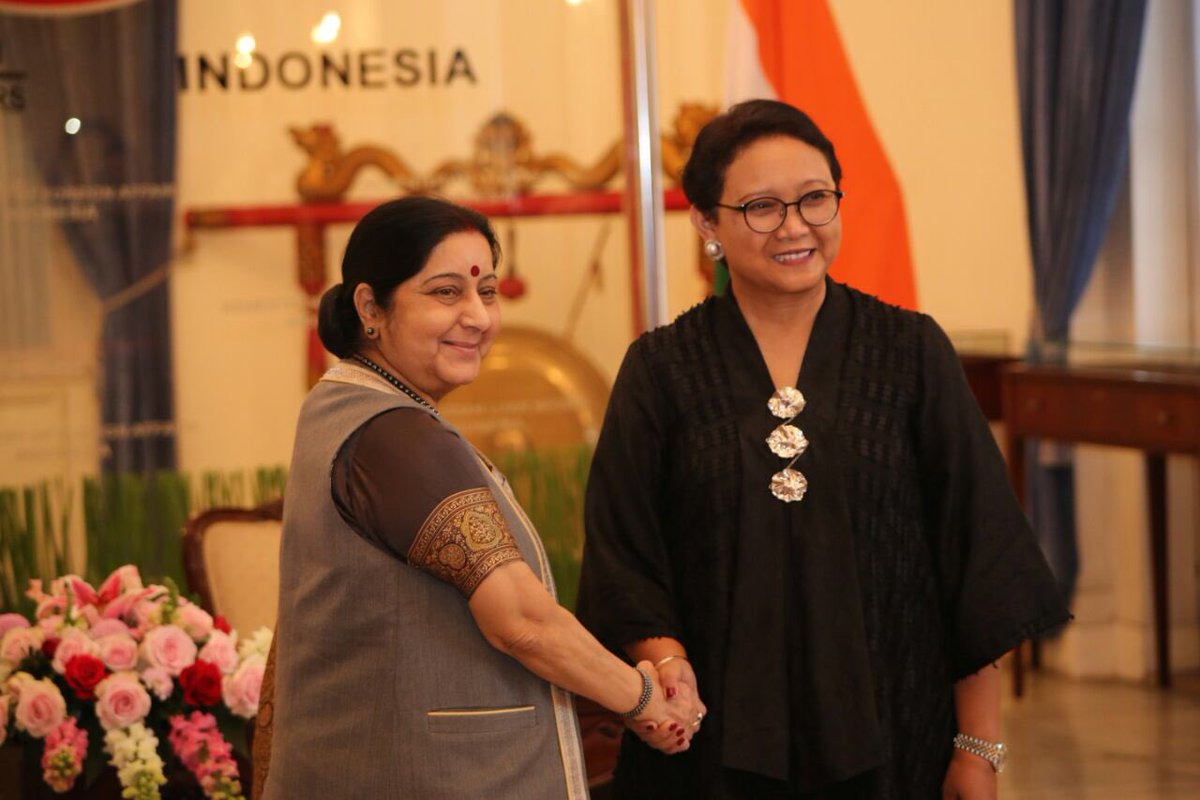 Indian Minister for External Affairs Sushma Swaraj with Retno Marsudi, Foreign Minister of Indonesia ahead of the India-Indonesia Joint Commission Meeting in Jakarta on 5 January. The Minister reaffirmed India's desire to enhance partnership across all sectors in keeping with its Act East Policy. Photo courtesy: MEA

Earlier today, Swaraj departed from Jakarta after inaugurating the 5th Round Table of ASEAN India Network of Think-Tanks which was attended are the Foreign Minister of Indonesia Retno Marsudi and Secretary General of ASEAN Dato Paduka Lim Jock Hoi. This roundtable is in the run-up to ASEAN India Commemorative Summit, an important event in Jakarta today, the MEA spokesman Raveesh Kumar said.

Connecting with the Indian diaspora, EAM @SushmaSwaraj addressing the Indian Community at a Reception held in her honour in Jakarta. #ActEastPolicy. pic.twitter.com/pp3BKdyxlV

The minister also attended a reception hosted by Indian diaspora in Jakarta in her honour where she exhorted them to return to "a transformed India" for better future and participation under the leadership of Prime Minister Narendra Modi.

"As the biggest country in the ASEAN region with the largest economy, Indonesia is an important partner for India including in trade and strategic matters. In recent times, there has been intensive engagement between the two countries bilaterally, as well as plurilaterally. The Joint Commission meeting and other engagements of External Affairs Minister will enable the two countries to chart out the course of the partnership during the year 2018," the MEA said. 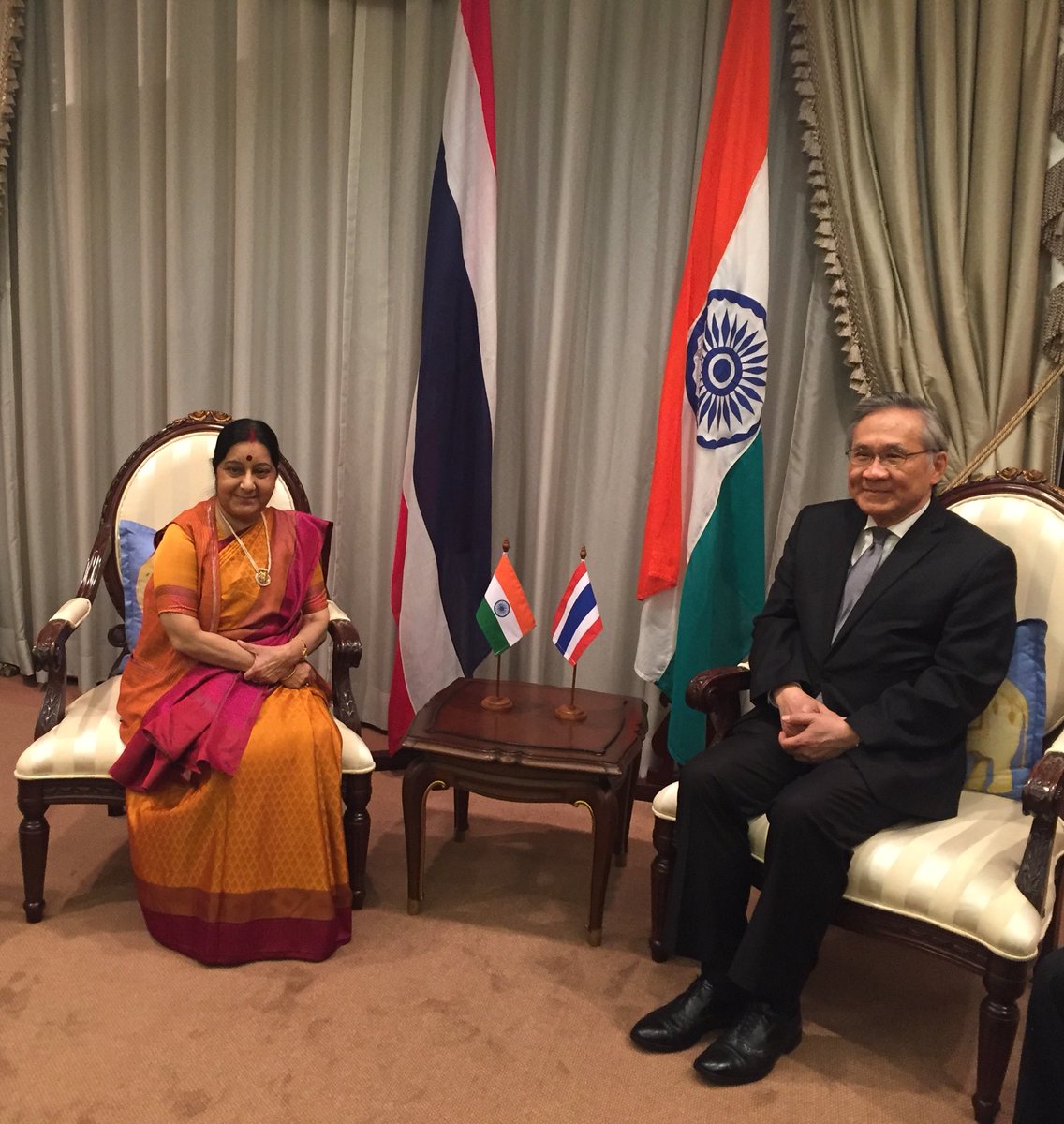 On 4 January in Thailand, Swaraj called on Don Pramudwinai, the Foreign Minister of Thailand, and the two leaders imparted further momentum to the bilateral relationship and discussed issues pertaining to connectivity, security and cultural cooperation. Thailand will assume the role of coordinator country for India-ASEAN relations in the middle of 2018.

Swaraj embarked on a three-nation, five-day tour starting with her visit to Thailand on 4, 5 January, followed by Indonesia on 5, 6 January and Singapore on 6, 7, and 8 January.

"Within the framework of India's Act East Policy, there have been intensive bilateral interactions in various sectors with the countries of South East Asian region in recent years. To give these interactions a further boost, Sushma Swaraj, External Affairs Minister. will undertake her first visit of the year 2018 to these South East Asian countries," the MEA said.

On all three legs of her visit, EAM is slated to share with her interlocutor's relevant information about the forthcoming ASEAN-India Commemorative Summit which marks 25 years since the establishment of Dialogue Partnership between Indian and ASEAN. A series of events have been organized by MEA over the last year to celebrate this jubilee in different Indian cities and also ASEAN countries, which will culminate in the Summit later this month in New Delhi.