The Union sports ministry has suspended all activities of the Wrestling Federation of India (WFI), after the government asked federation president Brij Bhushan Sharan Singh to step aside until an oversight committee being appointed completes a probe into accusations against him. 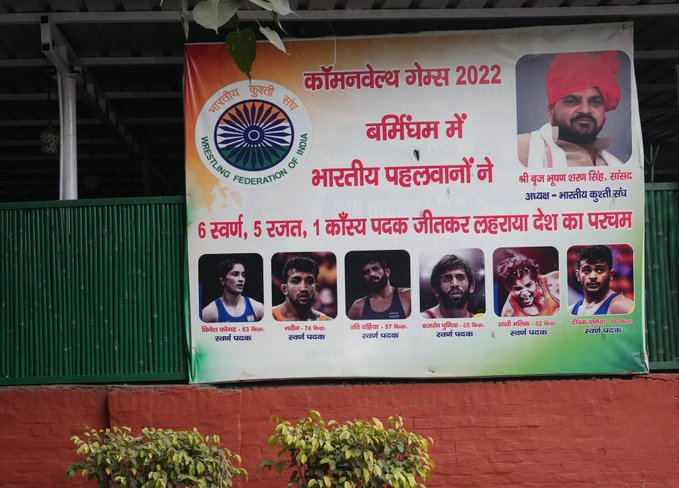 Sports Minister Anurag Thakur announced the composition of an Oversight Committee to handle the day-to-day functioning of the WFI and also look into the serious allegations made by the wrestlers. Photo courtesy: Twitter/@abhinavsaha

The government also suspended the federation’s assistant secretary Vinod Tomar. The Union Sports Ministry recently asked the WFI to suspend all its activities.

After a second round of discussions with the protesting wrestlers last week, Sports Minister Anurag Thakur had announced an oversight committee to go into the allegations of “sexual misconduct, financial irregularities and administrative lapses and to undertake day-to-day administration of the WFI”.

The committee is to complete the probe in a month and until then the “WFI president will step aside from the day-to-day functioning and has assured to cooperate in the investigation,” Thakur had said.

“The Ministry of Sports has communicated to the Wrestling Federation of India on Saturday that in view of the Government’s decision to appoint an Oversight Committee to investigate the various allegations raised by athletes against the Federation, WFI will suspend all ongoing activities with immediate effect, unless the Oversight Committee is formally appointed and takes over the day-to-day functioning of WFI,” said a ministry statement.

“In view of the direction to suspend all activities immediately, the Sports Ministry has asked WFI to also cancel the ongoing Ranking Tournament in Gonda, UP. The Ministry has directed WFI to return the entry fees charged to participants for the ongoing event.”

The development took place hours after WFI sent a detailed eight-page reply to the explanation sought by the sports ministry, dismissing the charges, including allegations of ‘sexual harassment’ levelled by the wrestlers against Singh, calling them “motivated, biased and unfounded”.

The WFI said “no adverse action is called for against the federation in terms of the provisions of the National Sports Development Code of India.”

The Indian Olympic Association (IOA) has also formed a seven-member internal committee under Athletes Commission chairperson and boxing legend MC Mary Kom to investigate the allegations of sexual harassment against the WFI chief.

Following the steps taken and assurances given by the government, country’s top wrestlers, including Olympic medallists Bajrang Punia, Sakshi Malik, Ravi Dahiya and world championships medallists Vinesh Phogat and Deepak Punia, ended their protests on Friday night. The wrestlers, who staged a sit-in protest for three days at Jantar Mantar for an unprecedented protest against the WFI, have gone back to their homes and promised to keep a close watch on the developments.

One of their demands was the removal of Tomar, considered close to Singh and against whom they levelled charges of taking favours from wrestlers to include their names in the national camp and taking money from coaches to send them on foreign exposure tours. Tomar used to oversee the day-to day running of the federation -- organising national camps and domestic tournaments.

“The Ministry has taken note of the reports about the functioning of the WFI, including the role of Shri Vinod Tomar and, has reasons to believe that his continued presence will be detrimental to the development of this high priority discipline,” the ministry statement said.

The WFI reply to the sports ministry said the protest was “hidden agenda to dislodge the current management of WFI”.

The letter signed by WFI general secretary VN Prasood said: “Under the sitting President, WFI, the WFI has enhanced the image of wrestling nationally as well as internationally and for the record of this Ministry it is not possible without fair, supportive, clean and strict management of the WFI.”

On charges of sexual harassment against WFI president and some of its coaches, WFI called it a conspiracy to “malign and defame” him and the coaches.

It said not one allegation of sexual harassment has been reported to the WFI’s sexual harassment committee. “Hence allegations to that effect are equally malicious and unfounded without being any truth in the matter except to come to public through media for making a soft target of the prestige of the present management of the WFI as well as the sitting President of WFI,” it said.

Punia, while calling for the protest to end, said they are confident an unbiased probe will be held.

“The minister has listened to our voice and has formed a committee. We are confident that an independent probe will be done. The minister has also assured that our safety is responsibility of the government because it has happened in the past that the WFI chief has threatened wrestlers. The wrestlers were concerned that since we have raised our voice against him, we were fearful. I am thankful to the sports minister and the government and we are ending our protest,” he said.