Singapore, New York most expensive cities to live in: Surveys

Multiple surveys have identified Singapore and New York as among the most expensive cities in terms of cost off living this year.

According to this year's Worldwide Cost of Living Index, released by the Economist Intelligence Unit (EIU), the average cost of living is up 8.1 per cent in 2022, owing to the Russian war in Ukraine and the lingering effects of the pandemic. The index listed the top 10 most expensive cities to live in, with New York and Singapore joint first.

Another study published by ECA International found that Singapore rose four places, making it the eighth most expensive location in the world and second in Asia. New York remained in the top spot.

The EIU evaluates more than 400 individual prices across more than 200 products and services in 172 cities in order to produce the list. The ECA list has a somewhat different technique, focusing on regular costs such as rent and the price of public transportation while excluding luxury goods from its calculations. 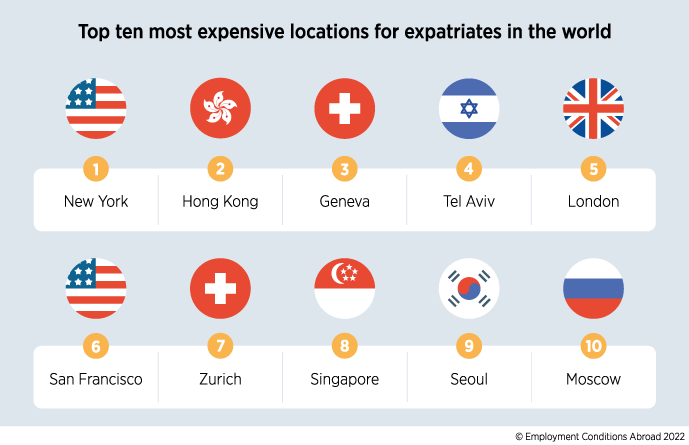 “The biggest driver behind Singapore’s rise in our latest rankings has been the double-digit increase in rental costs in 2022,” said Lee Quane, Regional Director – Asia at ECA International. “The COVID-19 pandemic impacted the supply of accommodation coming to market, and the resurgent demand has increased significantly with the city reopening its borders once again. This may be a short-term shock, but it has nevertheless been responsible for Singapore’s current position as one of the ten most expensive cities worldwide.”

Despite the general uptrend in inflation rates globally, those across Asia have seen relatively smaller upticks, resulting in almost 65% of surveyed locations in the region falling in this year’s Cost of Living rankings.

Hong Kong, which came in first in last year’s rankings, has moved down one place to become the second most expensive location in the world. In spite of relatively high rates of inflation and a strong Hong Kong Dollar, its drop can be attributed to a fall in accommodation costs. Demand for properties popular with expatriates fell as the Hong Kong economy stuttered in the face of slowing economic growth in China, uncertainties in imposing the national security law as well as strict COVID restrictions.

In China, with the yuan weakening against the US dollar and amidst relatively low inflation rates, Chinese cities found themselves further down the rankings compared to last year, with Guangzhou and Shanghai dropping out of the global top 10.

Meanwhile, Japan, which has typically been regarded as a country with a relatively high cost of living, saw a significant departure from the norm this year. The depreciation of the Japanese yen by 20% year-on-year against the US dollar led to big falls in the rankings for all Japanese cities surveyed – Tokyo, which ranked third globally last year, has fallen out of the top 10 this year, while Nagoya fell 49 places to 87th.

High rates of inflation have contributed to rises in the rankings for several locations in Malaysia, including Johor Bahru. However, its capital Kuala Lumpur moved down to 167th, as the Ringgit’s weakness against the US Dollar has offset some of the impact that inflation has had on its ranking.

Meanwhile, cities across Thailand and the Philippines have all seen drops in this year’s rankings. Bangkok fell 12 places to 63rd, continuing its move away from the global top 50, while Manila fell 10 places to 67th and Cebu City 14 places to 169th globally.

Laos in particular saw the largest fall in rankings among Southeast Asian locations, with Vientiane dropping 29 places to 193rd in the world as a result of the Kip weakening against the US dollar by 38%.

New York has been named the most expensive location in the world, owing to the strength of the US dollar and high inflation. These factors have also led to all other US cities moving up in this year’s rankings, with San Francisco now in sixth and Los Angeles entering the global top 20.

In contrast, most locations in Europe have seen drops in their positions despite high inflation rates driven by rising fuel and food costs. This was primarily spurred by a weakened euro and British pound, which has made expenses in regional cities cheaper in comparison to other cities around the world.

“Following the Euro’s significant depreciation to parity with the US dollar, cities across the eurozone fell in the rankings despite high inflation rates fuelled by the war in Ukraine,” said Quane. “Throughout the region, only nine cities rose in the rankings, with London being one of them. However, the eurozone was not alone in this, as many other currencies also weakened against the US dollar.”

With inflation rates surging beyond 100% in Turkey, the country has become more expensive for expatriates and tourists alike despite the plunging value of the lira – Istanbul rose 27 places to 150th, while Ankara moved out of last place to 205th.