Highlighting the positive effect on Indo-Pak relations not just in the subcontinent but across the world, Sikhs in America have hailed the Indian government’s decision to build a religious corridor linking the Indian border district of Gurdaspur with historic Kartarpur Sahib gurdwara in Pakistan — fulfilling a long pending demand of the community. Kartarpur Sahib in Pakistan is located across the river Ravi, about 4 km from the Dera Baba Nanak shrine in Punjab’s Gurdaspur district. It was established by the Sikh Guru in 1522. The first Gurdwara, Gurdwara Kartarpur Sahib, was built here, where Guru Nanak Dev is said to have died. 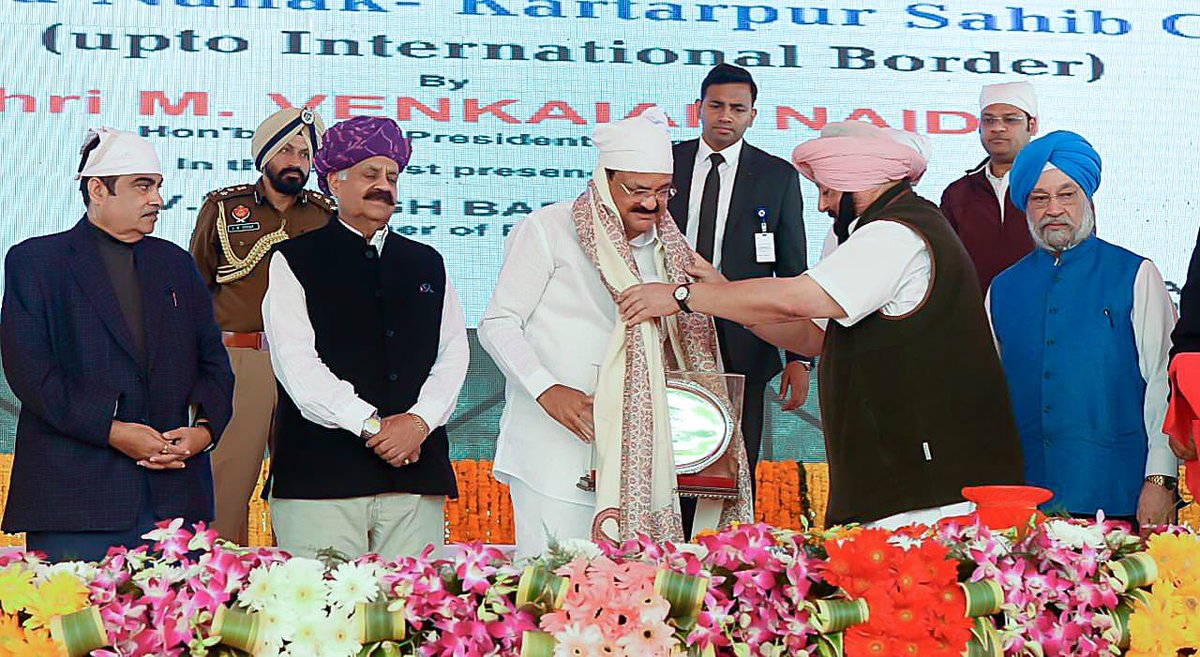 Punjab Chief Minister Captain Amarinder Singh (2nd from right) and Indian Vice-President M Venkaiah Naidu (Centre) at the inauguration of the Kartarpur foundation stone. Both India and Pakistan have announced that stretches would be developed in their respective areas.

Both India and Pakistan have announced that stretches would be developed in their respective areas.

“The Indian government’s decision to develop and open the Kartarpur Sahib Corridor is historic,” Jasdip Singh, the chairman of the Sikhs of America, said during his meeting with visiting Union Minister of State for External Affairs Gen (retd.) VK Singh.

A delegation of eminent Sikhs of America led by Jasdip Singh on Saturday met the minister here.

“From the very first day after coming to power, the Prime Minister has not only been sympathetic to the concerns of the Sikh community but has also acted to address all our concerns,” he said.

Welcoming the decision, Gurinder Singh Khalsa, a community leader, said that this is just a beginning for greater good of the region and the humanity.

“Incarnation of God, Guru Nanak became corridor between Hindus and Muslims, rich and poor, Pundits and Dalits during the most troubled times. I am a firm believer that now again after 550 years, with the grace of almighty, Kartarpur (town of God) corridor will be a pathway for sustainable peace between the two countries of India and Pakistan,” Khalsa said.

“This is a historic decision,” said Adapa Prasad, vice president of Overseas Friends of BJP.

Fulfilling the decades pending demand of Sikhs, GoI clears 'Kartarpur corridor' till Pakistan border to help pilgrims. Shrine is 3 kilometres from the India-Pak border. The 3-4 km long corridor will be built and funded entirely by the Govt of India.#Kartarpur #KartarpurCorridor pic.twitter.com/CsPiKFtex1

The decision regarding construction of the Sikh corridor has the potential to kick-off peace between India and Pakistan. “Prime Minister Narendra Modi has been a great friend of the Sikhs. This was one of our long pending decision,” said Puneet Ahluwalia, a Republican leader from Virginia.

In a memorandum submitted to the visiting minister, Sikhs of America organisation urged the prime minister to bring to justice the masterminds of the 1984 riots.

The memorandum also urged the Indian Government to provide visa to the Sikhs in the US who have received political asylum.

My govt has decided to build a grand Gate at the #KartarpurCorridor as a historic symbol to commemorate the 550th birth anniversary of Sri Guru Nanak Dev ji. I’m happy to share that Union Minister @nitin_gadkari has approved our proposal. Will ensure befitting celebrations. pic.twitter.com/nYKInPtvt9

Singh, who is currently on a three city US trip to inaugurate Passport Seva projects in New York, Washington DC and Atlanta, was felicitated at a Baltimore Gurdwara in Maryland in recognition of some of the decisions being taken by the Indian government for the Sikh community.

The local Sikh community from Maryland and Virginia representing the Sikh Sewa presented a Saropa to the minister at a community reception later in evening.