The Singapore Stock Exchange (SGX) has announced it will be establishing its offshore office at Gujarat International Finance Tec-City (GIFT-City) in Gandhinagar, an official release said yesterday. Simon Wong, Singapore's High Commissioner to India, led a high-level delegation from his country to meet Gujarat Chief Minister Vijay Rupani with regards to the matter. 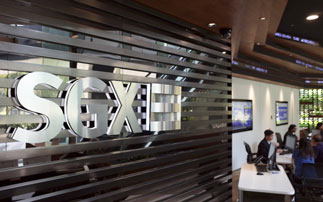 Wong was of the opinion that SGX office here will encourage many more subsidiary companies from Singapore to establish their offices at GIFT City. Photo courtesy: SGX

The Singapore delegation is in Gujarat to complete the establishment of the offshore office of the Singapore Stock Exchange (SGX) at the GIFT City by April-end, the release said. Wong extended an invitation to the Chief Minister to the inaugural function, which he accepted.

Wong was of the opinion that SGX office here will encourage many more subsidiary companies from Singapore to establish their offices at GIFT City.

CM Rupani said that Gujarat is committed to establish the GIFT City as a world-class centre for financial and technological companies on the lines of Singapore and Dubai.

He told the delegation that Gujarat is a leading state to attract FDI in India, while Singapore is the second-largest contributor of FDI inflow into Gujarat in the last financial year.