Indian-American Karan Gandhi got an unanticipated response to his letter to Indian cricket legend Sachin Tendulkar on Monday.

Thank you for the letter, Karan Gandhi! I'm sure your childhood tuition teacher mustn't have been too happy when ODI matches were on. :)

In his letter, he initially introduced himself as a person of Indian-origin who currently resides in the United States. He went on to add how he enjoyed watching the master blaster at his game immensely to the point of skipping tuition classes to watch his matches.

“Dear Sachin, my name is Karan, I currently live in the US but am originally from India. I grew up seeing you play cricket. I missed countless tuition classes to watch you play ODIs in India. I have always meant to write to you and express how honoured I am to be your fan and time and again be inspired by your sportsmanship and work ethic on the field,” Karan wrote.

“Sachin, I know you have a busy life now, but I would love to receive a letter from you. I collect hand signed letters from people I admire and I’d love to get one from you. I’d really cherish that letter,” he added.

Sachin’s response has gone viral: "I'm sure your childhood tuition teacher mustn't have been too happy when ODI matches were on," he posted, after thanking Karan for the letter. At last count, there are over 100,000 likes for the post. 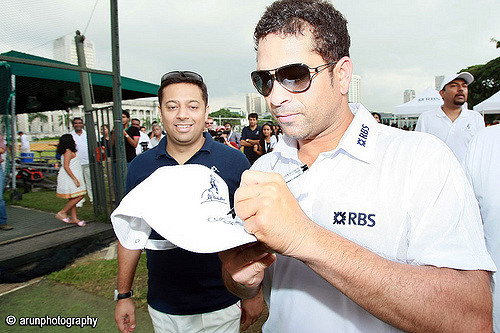 The 43-year-old, who still holds the record for most total career hundreds, is very active on social media.

On Twitter, he recently announced the release of the official trailer of the film 'Sachin: A Billion Dreams', based on his life.