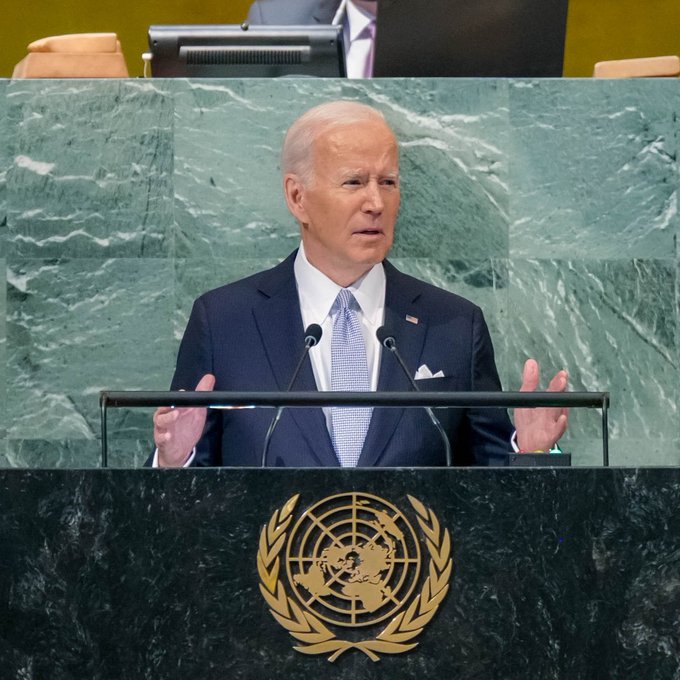 Speaking further, the US President said that America wants the war to end on" just terms" - "on terms we all signed up for, that you cannot seize a nation's territory by choice". Photo courtesy: Twitter/@POTUS

Speaking at UNGA, he said, "Russia, invaded its neighbour, adding Moscow has "shamelessly violated" the core tenets of the United Nations charter.

The US president said Vladimir Putin has attempted to "erase a sovereign state from the map" and calls Russia's plan to organise "sham" referendums in parts of Ukraine it currently controls an "extremely significant violation of UN charter".

"Putin claims he had to act because Russia was threatened but no one threatened Russia and no one other than Russia sought conflict," said Biden.

He said that Putin has made nuclear threats against Europe, adding that Russia is calling up more soldiers to fight and the Kremlin is trying to annex parts of Ukraine.

"The world should see the outrageous acts for what they are," added Biden.

Biden said that Putin made nuclear threats against Europe, adding that Russia is calling up more soldiers to fight and the Kremlin is trying to annex parts of Ukraine.

"The world should see the outrageous acts for what they are," he said.

Putting the blame on Putin over the Ukrainian crisis, he said, "War chosen by one man (Russian President Vladimir Putin) to be very blunt."

The US President said that Russia's war is about extinguishing Ukraine's right to "exist as a state, as a people", "plain and simple", before telling those at the UNGA that should "make your blood boil".

"Ukraine has the same rights that belong to every sovereign nation. We will stand in solidarity with Ukraine and against Russia's aggression, period. Just before he invaded, Putin asserted, and I quote, 'Ukraine was created by Russia' and never had quote 'real statehood'," said the US President.

Biden supports Germany, Japan, and India as permanent members of a reformed United Nations Security Council, a senior official of his administration has said.

Biden in his address said he believes the time has come for the institution to become more inclusive so that it can better respond to the needs of today's world.

He also expressed concerns over the mass grave recently uncovered in Izyum, which he said, "showed signs of torture. And now we see attacks on schools, railway stations, hospitals.. even more, horrifying evidence of Russia's war crimes."

"Whoever you are, wherever you live, whatever you believe - that should make your blood run cold. That's why 141 nations in the General Assembly came together to unequivocally condemn Russia's war against Ukraine," added Biden.

He added that the US has personally marshalled "massive levels of security assistance, humanitarian aid and direct economic support" to Ukraine.

Speaking further, the US President said that America wants the war to end on" just terms" - "on terms we all signed up for, that you cannot seize a nation's territory by choice".

"The only country standing in the way of that is Russia," he added.

He urged UN members to be "clear, firm and unwavering in our resolve".

Moreover, Biden rejected the use of violence and war to conquer nations, and "expand borders through bloodshed".

He stressed defending the sovereign rights of smaller nations as equal to those of larger ones, embracing the basic principles of freedom of navigation, and respecting international law as the common ground upon which UN nations must stand.

He also said that "no country can use energy as a weapon."

The US is working with other countries around the world to protect nations "from coercion or domination, and ensure that no country can use energy as a weapon", said the US President.

The US is also calling on major global creditors to "transparently negotiate debt forgiveness", and "to forestall broader economic and political crises around the world", he added.

"No matter what else is happening in the world, the United States is ready to pursue critical arms control measures," he said.

He said that war has brought "disturbing" trends as "Russia shunned the non-proliferation ideals embraced by every other nation".

He reiterated that Russia is making irresponsible threats to use nuclear weapons.

Biden started his address at UNGA by listing some of the challenges facing countries around the world - including food insecurity, conflict and natural disasters.

"In the last year our world has experienced great upheaval - growing crisis in food insecurity, record heat, floods and droughts, COVID-19, inflation and a brutal needless war (Russia-Ukraine war)," said the US President.