A Non-Resident Indian (NRI) working in Singapore was sentenced to three-and-a-half years in jail for encashing cheques worth SGD470,000 of his employer's money and absconding to Malaysia with the cash in March. 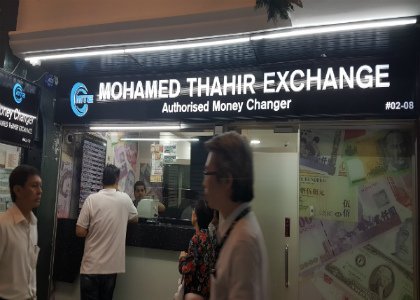 Bahurudeen was later detained at the border of Kedah when he attempted to leave Malaysia for Thailand. Cash totalling almost USD24,000 was found in his possession and seized. Photo courtesy: cashchanger.cb

Bahurudeen Kuthpudeen, 44, pleaded guilty to one count each of criminal breach of trust and removing from Singapore the benefits of his criminal conduct, reported The Straits Times yesterday.

The case showed that his employer, AM Mohamed Farook, who operates the Mohamed Thahir Exchange in Collyer Quay, signed three cheques for a total amount of SGD469,900 at around 3 pm on March 27. The cheques were meant to be encashed for the purchase of foreign currencies. The cheques were passed to Bahurudeen who encashed them at an RHB Bank branch at the nearby Cecil Street.

Deputy Public Prosecutor (DPP) Melissa Ng said, “Instead of returning to the company, the accused left Singapore via the Woodlands Checkpoint bus hall at 4.46 pm for Malaysia.” When his colleagues failed to find him, they alerted AM Mohamed. He tried to contact Bahurudeen on his mobile phone but received a ringtone that is usually heard in overseas calls.

He then lodged a police report. DPP Ng told District Judge Luke Tan that Bahurudeen was later detained at the border of Kedah when he attempted to leave Malaysia for Thailand. Cash totalling almost USD24,000 was found in his possession and seized.

The Royal Malaysia Police arrested Bahurudeen on March 28 and he was sent to Singapore on March 29. Lawyer Siraj Shaik Aziz, who was assigned to the case under the Criminal Legal Aid Scheme, said 4,58,652 Singapore dollars of the misappropriated amount had been recovered.

Siraj added that his client was his family’s sole breadwinner. His wife had stayed home in India to look after their 13-year-old daughter, who has a disability in her hand.

Stressing that Bahurudeen is “genuinely remorseful”, the lawyer told the court: “It was financial difficulties brought on by the need to service a loan for his daughter’s hand operation that prompted the commission of the offences in a momentary lapse of judgement.”