A story about two (or more) men, bonding, having each other's back, teaming up and serenading each other in a bromance has formed the screenplay of many movies.

But two female protagonists, a 'sismance' if you will, doesn't roll smoothly off  the tongue.

Which is why if this movie was fictional it would be hard to swallow, especially in this age of TV serials and day-time soaps where women are shown as a woman's worst enemies. That is the first stereotype shot down in Saand ki Aankh.

There is a warmth, an understanding, an unwritten sisterhood code between Bhumi Pednekar and Tapsee Pannu that reaches out to the audience.

It is not just these two women but a whole brood of them in a patriarchal family, in highly gender discriminatory Uttar Pradesh, who practise 'Omerta'. They become allies in maintaining a code of silence about the women in the household who are committing ‘criminal trespass’ by stepping out of their homes and participating in competitions in public. The movie shows that camaraderie amongst women lives, and long may it live.

Saànd ki Aankh is based on a true story of two sisters-in-law who took up shooting in their 60s & won multiple medals. The shooter ‘daadis’ (Grandmothers) or grandmas as they are fondly called are now in their 80s. They motivate the next generation, literally. One of their daughters Seema Tomar, won silver for India at the International Shooting Sport Federation World Cup 2010. 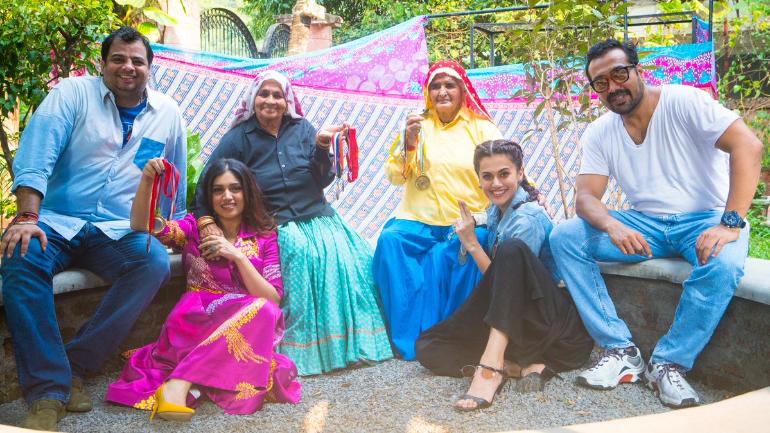 A woman can never correctly assess how many years of her life she has lived for herself, says one of the daadis in an interview, when asked why women always hesitate to state their true age. With their colour-coded ‘ghoonghats’ or veils these women also never saw anything in its true colour. They always saw the world through their ghoonghat-tinted lenses. The joke about the middle sister-in-law seeing only blue films, because she needs to always wear and be identified by a blue veil that covers her face evokes pained laughter.

Enduring hard labour throughout their lives and labour pains every year for most of their married life is the norm for the ladies. Dreaming of standing on their own two feet or daring to question the authority of males is a revolutionary break from the norm. Which is why this movie needed to be made and needs to be seen by women who still quake in their shoes when requesting permission to step out of the boundary lines etched by patriarchal menfolk of their household.

The likable doctor who sets up the shooting range is one of the handful of males whom they encounter in their lives, who sees their abilities and not just their gender. In contrast Prakash Jha’s character who tars them with a gender brush through his sweeping derogatory remarks is easily hateable. The way a laden with medals Seema flinches when her grandpa steps up to her as she returns home to pomp and paparazzi wrings the heart.

The make-up that went in to make the 30-year-olds look 60 definitely has not taken a leaf out of the book of the movie Paa where Amitabh Bachchan’s prosthetic make-up was flawless. The dialogues delivered in the local Hindi dialect, too leave a lot to be desired unlike Dangal which had rocked it. There are times when the movie seems untethered like a kite with its string let loose. Tighter editing would have kept the audience captivated throughout the movie rather than in flashes.

This biopic on women's empowerment based on the true life of India’s oldest sharpshooters, Chandro Tomar and her sister-in-law Prakashi Tomar, is carried ably on the shoulders of some acting power-houses in the movie.