A Malayalam language film on a socio-political topic ergo the location must be Kannur. Thankfully the beautiful cinematography and the shift to the Periyar Tiger Reserve Forest in Pathanamthitta district where Sabarimala is located gives the audience a reprieve from the oft shot locales of Kannur.

What happens when a political leftist and staunch rationalist, so rigid in his beliefs that he will sacrifice his personal happiness for his party, is forced by his own party to give up his principles for the greater good of a comrade ? A pilgrimage to Sabarimala with a preceding 41 days of austerity is what happens.

Biju Menon is believable as the hassled, harried teacher who objects to any and every tradition, ritual or practice which does not have a rational meaning behind it.  Nimisha Sajayan as his almost-wife didn’t feel like a rational fit into his character as a stickler for logic and reason.

However, the show stealer is definitely Saran Jith as Vaavaachi Kannan who gets into the skin of a character with mostly flaws and yet makes you like him and root for him. Dhanya Ananya as his wife Suma, does a great job supporting him, many a times literally, in the movie.

This is the first film for Saran Jith, an alumni of the Intercultural Theatre Institute, Singapore. Audience here has seen the flash of brilliance he has brought to contemporary theatre productions during his sojourn in this island nation. It is heartening to see him get a role which he can sink his teeth into and in which he displays his talent as a complete actor, despite being a newbie in the company of a veteran like Biju Menon. 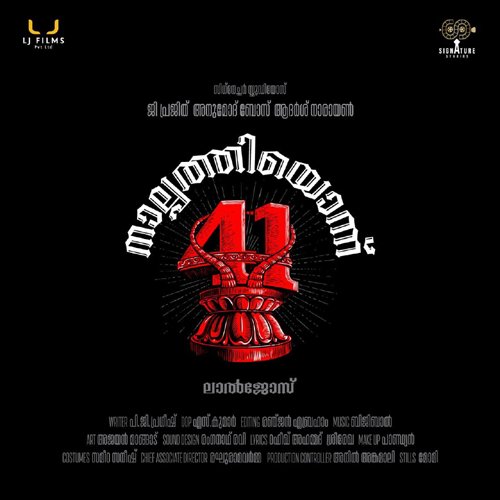 41 refers to the fourty one day 'vratham' or austerities undertaken by devotees before their trip to Sabarimala in Kerala. Photo courtesy: Singapore Coliseum FB

The second half of the movie is mostly the journey of Ullas and Kannan to Sabarimala and lacks the intensity, especially those seen in the first half in the interactions between Kannan, the romantic husband and Suma, the beleaguered wife, who is mother to her blind child as well as to her alcoholic husband.

The issue of atheism versus belief in God is dealt with without taking sides as if wary of rubbing either sides in an abrasive manner. It showcases the quandary of a modern day atheist who surrounded by family, friends and a society practising rituals and religious observances is forced to compromise but in a non-committal fashion.

The cinematography is beautiful in scenes that capture the natural beauty of Kerala, some slow motion shots (such as Kannan’s graceful falls), as well as in capturing the unabating flow of determined pilgrims in Sabarimala. The music by Bijibal Maniyil has a couple of lovely numbers.

A staunch believer and an atheist launching into 41 day ‘vratham’, followed by a journey to Pampa from Kannur makes for a very entertaining film even if it doesn’t plumb the depths of the dilemmas as it could have.