The resounding victory of the incumbent Bharatiya Janata Party-led alliance in India’s general elections is a welcome sign of stability in the South Asia region. But have the 600 million voters who participated in the world’s largest democratic exercise  reaffirmed their support to the right party with the right policy intentions remains to be seen. 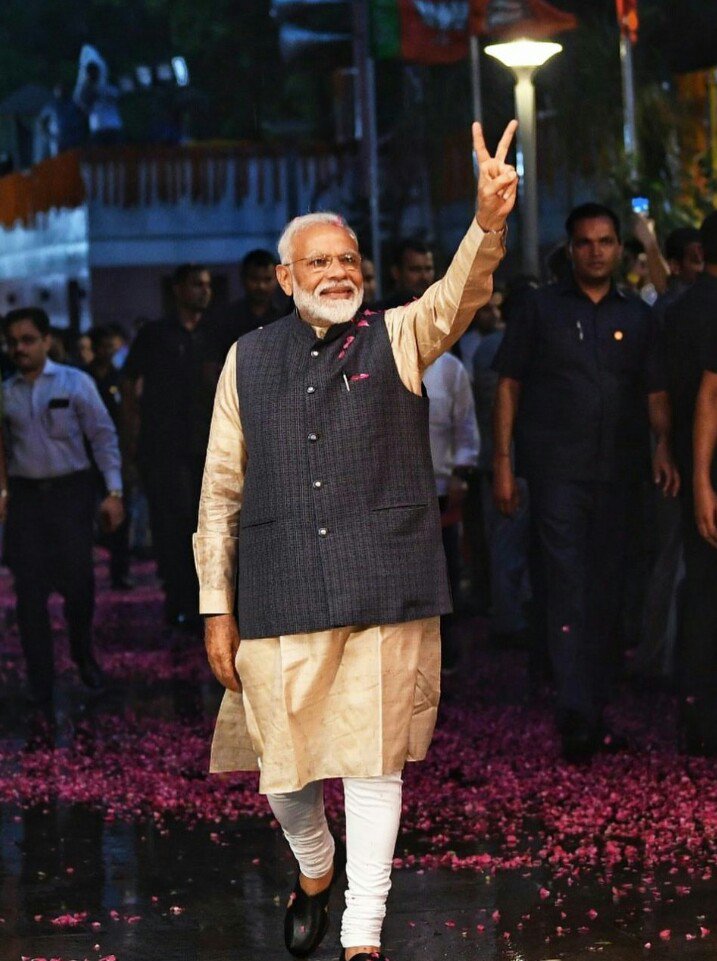 The result, in terms of voter percentage and seats, is a massive show of support and confidence for Prime Minister Narendra Modi’s BJP-led alliance. Photo courtesy: Twitter

The right-wing BJP-led National Democratic Alliance is set to win slightly over 300 seats out of a total 543 seats in the Indian Parliament’s Lok Sabha or lower house, at the end of the massive polling exercise in the last six weeks.

The result, in terms of voter percentage and seats, is a massive show of support and confidence for Prime Minister Narendra Modi’s BJP-led alliance that got a bigger majority for this second five-year term compared to its first.

Unsurprisingly expectations are much higher from this second ballot victory.

Modi’s alliance was voted to power in 2014 with an absolute majority in the country’s Lok Sabha as India’s voters expressed their frustration over a series of corruption allegations, high unemployment rates, and tepid economic growth during the rule of the Indian National Congress Party-led United Progressive Alliance.

Bureaucratic red-tape was also seen as stifling local businesses prompting an overwhelming support for what seemed like the pro-business BJP-led NDA alliance.

Modi promised a long list of reforms then that would induce economic and job growth, support business, help debt-ridden farmers, and create a corruption free environment with the introduction of more technology and better infrastructure.

Five years hence many of those promises remain unfulfilled. 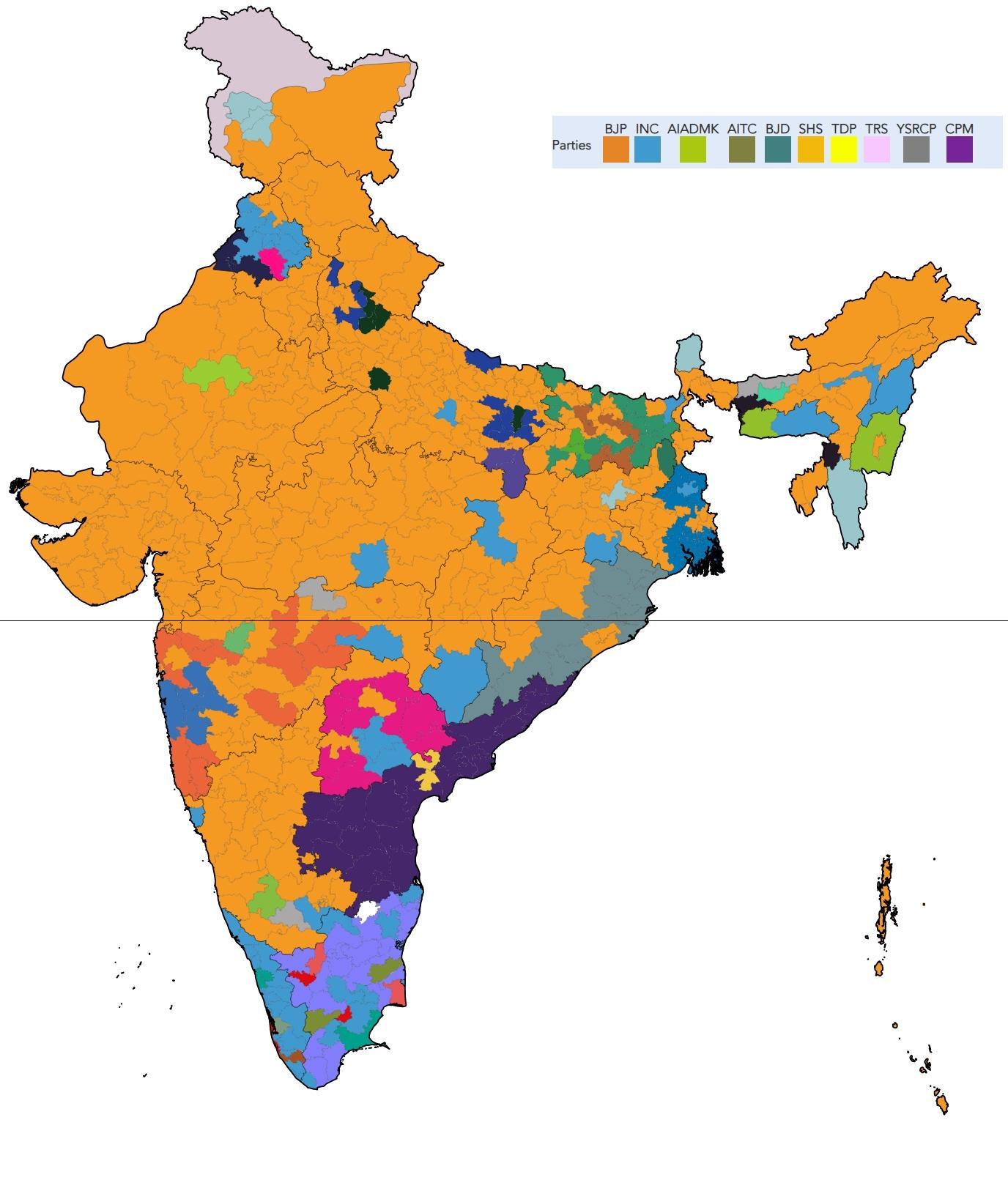 An election map of the constituencies. Photo courtesy: ECI

Some drastic steps were instead taken like a shot at tackling the scourge of undeclared taxable cash or “black money” by a hasty demonetization move - some denomination of notes were abruptly taken out of circulation and replaced by other denominations - that was very unpopular as it hurt the poor more than the rich cash hoarders.

The Hindu extremist elements within the party also exerted their influence by banning “cow beef” in some cities - ironically deciding what people should or should not eat in a country where a large proportion of population are still struggling to eat anything.

The government as such could not do as much as expected in implementing much needed judiciary reforms or cut down bureaucracy which corrupts the day to day life of every Indian. It made some moves but could not effectively improve social and physical infrastructure, and more broadly engineer an economic growth that included millions of its rural population.

A Clean India campaign was somewhat effective and there has been a spur in entrepreneurship and use of technology in banking. Infrastructure has improved but large cities are creaking under the weight of an increasing population as more people migrate to urban cities in search of jobs.

A show of Hindu extremism during the first term has led to some skepticism about how this alliance or workers within it would behave given the overwhelming mandate in these elections.

Saber-rattling instead of peaceful overtures with its rival neighbor Pakistan may have worked for the alliance before the elections but they are unlikely to be  welcomed anymore by financial markets and the country’s population.

Instead Modi is urged to work towards poverty alleviation, which he declared will be his focus in his victory speech, grant more relief to struggling farmers and focus on improving the country’s connectivity between cities by  building world-class infrastructure.

Jobs are a main concern with a large proportion or about 65% of the country’s population 35 years old or under. This huge chunk of the population are more concerned about their economic future than casteist or religion-based politics - which the BJP many times in the past has been guilty of.

The pressure will be on the BJP alliance to deliver this time around and it is very likely there will be progress and some reforms that could boost India’s growth in the near term. But whether implementation of reforms would be done consistently and effectively without political distractions remains to be seen.

India is far too big a market to be ignored by the world and even if it tried it will be hard for the BJP alliance to trigger a reversal in the current economic growth momentum.

But there is a threat of a global recession looming in the horizon so the new Indian government must look to build its reserves and create a protective layer by encouraging more foreign exchange inflows from investors and even the millions of non-resident Indians by continuing to ease investment rules. 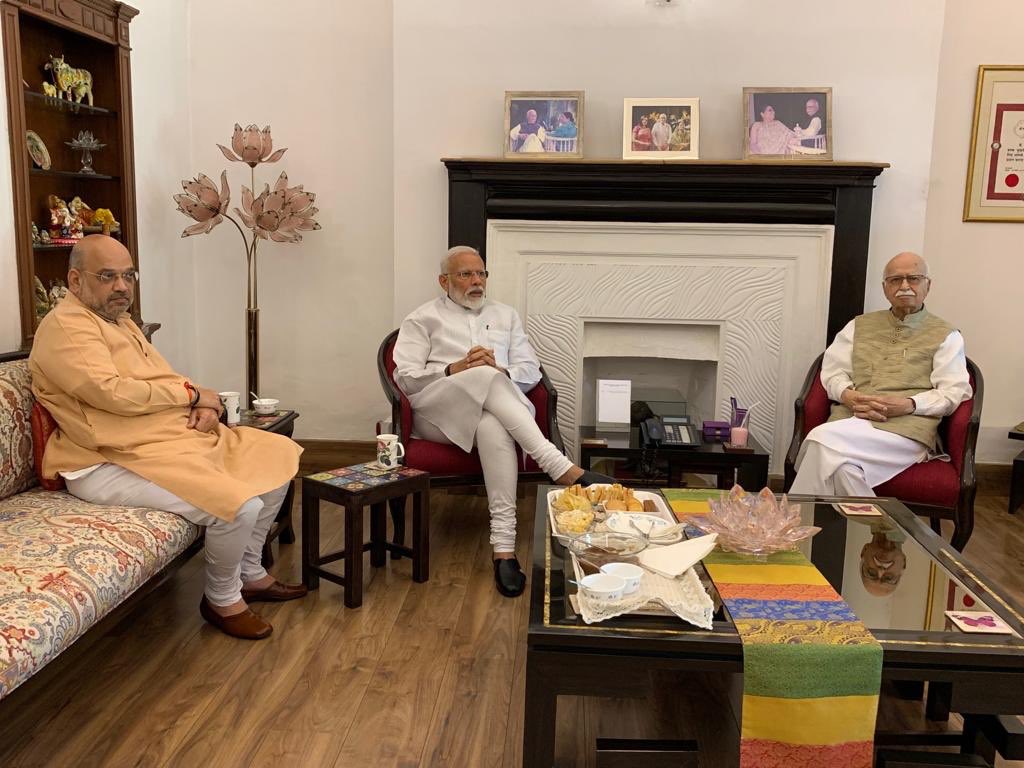 From left BJP president Amit Shah, PM Modi and senior party leader LK Advani. The pressure will be on the BJP alliance to deliver this time around and it is very likely there will be progress and some reforms that could boost India’s growth in the near term. Photo courtesy: Twitter/@narendramodi

The Indian economy has weathered many storms quite impressively in the past and people are trusting this government to protect them if there is another. If PM Modi’s speeches are to be believed, India could be on the verge of moving into double digit growth.

There can be great progress in the areas of poverty and income, and health and education and India can emerge into the front ranks of developing countries. It is an ideal world which is attainable if Indian policy-makers show the determination and prove to the world that impossible is nothing, even in the Indian context.