After months of challenges and an exhilarating final evening of culinary showmanship, NUS dental student Johnathan Chew has been crowned MasterChef Singapore in Season Three of the show. In a thrilling three-way match against his fellow finalists – visual arts instructor Azwandi 'Andi' Robani and car sales advisor S 'Nares' Nareskanna – Chew wowed the judges with his sophisticated spin on simple local cuisine. 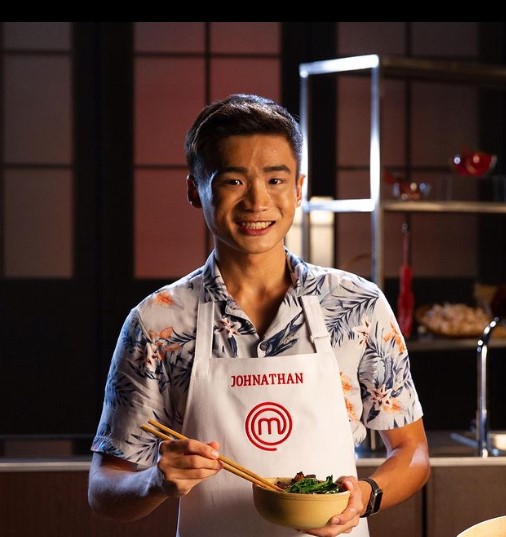 For the first time in MasterChef Singapore’s history, three contestants fought it out in the finale instead of the traditional two.

The final three contestants were tasked to whip up a three-course menu for the judges; Chefs Audra Morrice, Bjorn Shen and Damian D’Silva. As the rest of the Top 12 home cooks cheered them on, the finalists were awarded scores out of 30 by each of the judges for each course. After the second course, Andi bowed out for bagging the lowest combined score, leaving Chew and Nares to go head-to-head in a dramatic desert duel. By the end of the three-round battle, Chew triumphed with a grand total of 76.5 points out of 90, sealing victory over Nares by a mere 1.5 points.

In their appraisal of Chew’s abilities, the three judges praised his polished plating and refined reimagining of humble home-cooked fare, with finely finessed flavours befitting any top restaurant.

“I am so proud to be Singapore’s next MasterChef!” said the elated winner Johnathan Chew. “My confidence in my abilities has grown so much, and I have picked up so many skills throughout my MasterChef journey. This moment has always been a dream of mine, and clinching the trophy will motivate me to chase after all my other food dreams – like opening a bakery with my mum, which I feel is now within reach.”

Chew added that the show was the first time he got to interact with fellow foodies, professional chefs and big names in the food industry.

"Food is not just about what you see on your plate or taste in your mouth. It's the chef’s effort, the attention to detail, the communication skills and teamwork with fellow staff and food suppliers. As Singapore's new MasterChef, I hope I will be able to emulate the qualities that these chefs embody, and make mouthwatering food for the people,” he said.

“Season Three of MasterChef Singapore was a stirring showcase of the best things in life – food, friendships and love for family, forged through the fire of the kitchen,” said Angeline Poh, Chief Customer & Corporate Development Officer, Mediacorp. “Our heartiest congratulations to Johnathan on your MasterChef Singapore win! Your craft was on dazzling display tonight, and you are an inspiration to all aspiring amateur chefs. To Andi and Nares, you put up a formidable fight, and should be very proud of yourselves.”

Season Three of MasterChef Singapore was an ode to Singapore’s unique multicultural cuisine and the nation’s collective fondness for food. The 10-episode season also called attention to sustainability issues, such as the importance of reducing food waste and leveraging local produce to minimise carbon footprints. The casting call attracted hundreds of applicants, with an eclectic ensemble of teachers, university students, investors, stay-at-home mothers, and a food delivery driver.

MasterChef, created by Franc Roddam, first launched in 1990 in the UK and was later revived in 2005, where it remains a number one hit for the BBC. In 2017, MasterChef was officially crowned the Most Successful Cookery Television Format by Guinness World Records. MasterChef celebrated its 500th series globally in 2021, with 49 productions in 33 territories airing last year.