Patan Patola, the traditional weaving and dyeing art, is heading out onto the global stage. A dyeing workshop showcasing the handicraft will be held in Singapore on August 24. 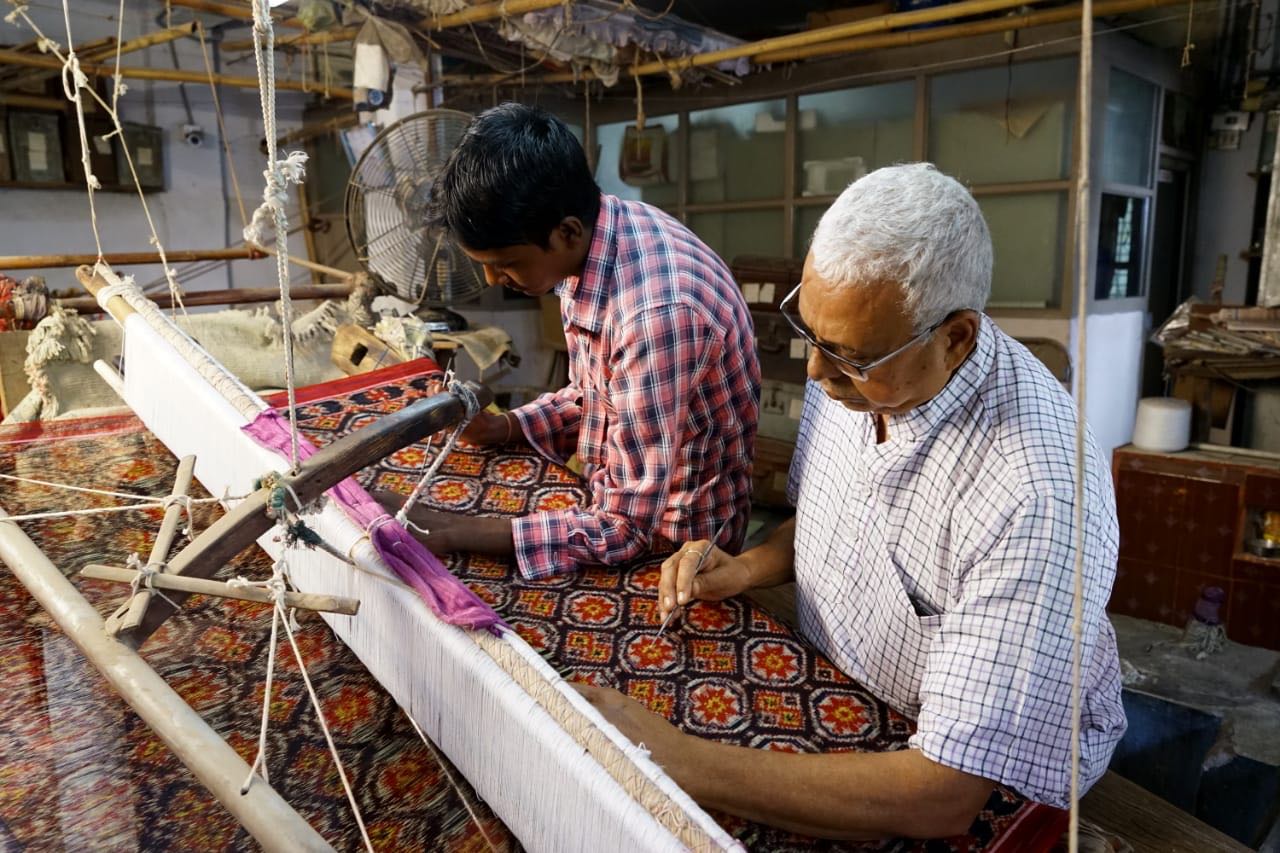 The knowledge of the process has been handed down for over 750 years in a few families, curiously all surnamed Salvi. Photo courtesy: Patan Patola Heritage

The workshop is being held at Vmall Entertainment's Pre Festive Bazaar at the Grand Ballroom, Chinese Swimming Club, S 439870. To register for the workshop, send an email to vmallentertainment@gmail.com.

The art, which is highlighted by Patola sarees, the preferred garments of former Indian Prime Minister Indira Gandhi and Sonia Gandhi, is held in great esteem that is reflected in the folklore of Gujarat. The knowledge of the process has been handed down for over 750 years in a few families, curiously all surnamed Salvi.

“We are exhibiting the beauty and timelessness of rich heritage of this ancient art form. The exhibition hopes to capture the imagination of the younger generation and encourage them to be part of the success story. We also hope to fuse the grace of patola with modern lifestyle and kickstart new fashion trends,” said Kanubhai Salvi, the founder of Patan Patola Heritage, a multiple awards-winning company located in Patan, Gujarat,

The craft specialises in creating exceptional outfits from the centuries-old textile Patola, an exquisite handmade silk fabric. Kanubhai’s industry one of the prime manufacturers and suppliers of Patola sarees, stoles and scarves in the country.
The company is a proud recipient of the UNESCO Seal of Excellence for Handcrafted products in Patolas, and has received the National Award recognition from former President Shankar Dayal Sharma, as well as the Heritage Award from the 11th Indian President APJ Abdul Kalam. 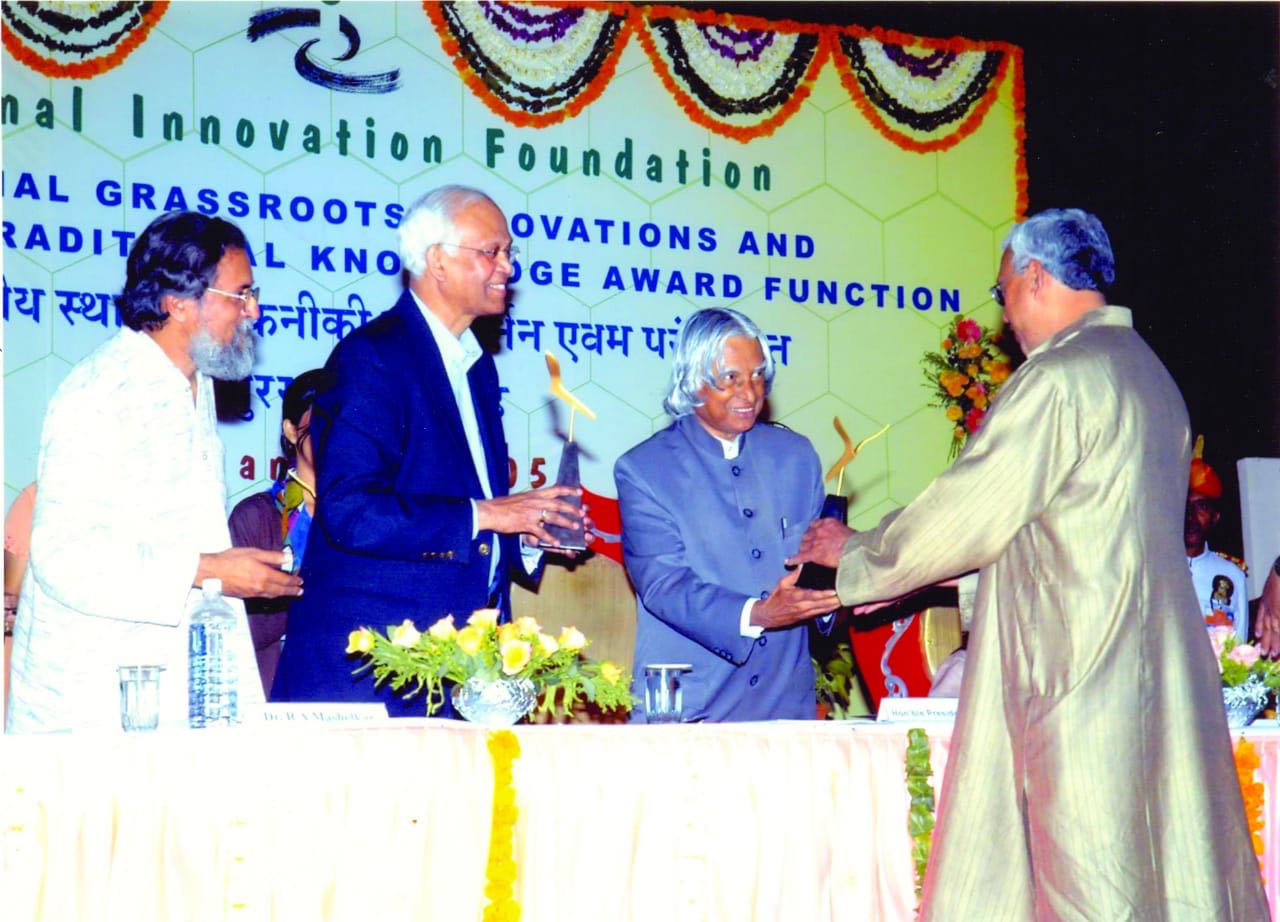 There are about eight procedures and with the involvement of 6-8 people, a Patola takes 2-4 months to complete, depending on the intricacies involved in its making.

The main processes include the conversion of raw silk in to pure silk, making warp and weft, tying the knots on warp and weft, dyeing, weaving, adjusting each thread of warp and weft, followed by the finishing of the fabrics.

This is the second visit by Salvi to the Lion City to market his products. Kanubhai Salvi has been conducting exhibitions and workshops around the globe for the past for decades. The next workshop being planned is to be held in London.

The craft had been going through a rough patch, but greater penetration of the internet and social media has had a rejuvenating effect on the industry. 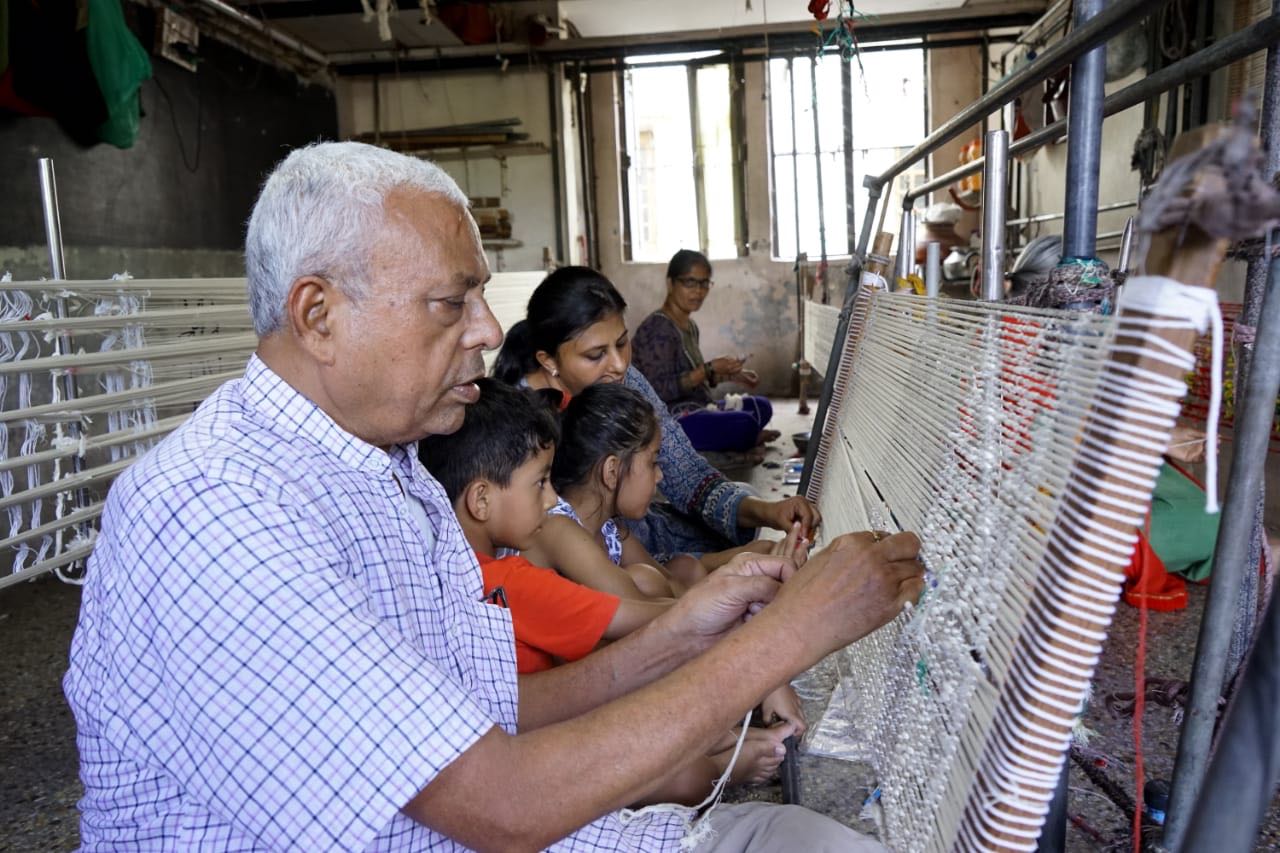 Kanubhai Salvi has been conducting exhibitions and workshops around the globe for the past for decades. Photo courtesy: Patan Patola Heritage

The art of Patola is being chronicled in various blogs and social media websites. Many of the conventional and rare designs are available on online outlets. A dedicated online museum is being planned to archive and catalogue the rich heritage.

Even though this event in Singapore is not aided and partnered by the Indian government, the weavers have been proudly associated with the Government of India Craft Museum to showcase and conduct workshops in the past, Kanubhai said, adding they would love to be part of such collaborations in the future.

In keeping with the Indian government’s initiative to promote traditional crafts, Prime Minister Narendra Modi visited the Indian Heritage Centre (IHC) during his recent trip to Singapore and launched a long-term platform for the demonstration and enjoyment of traditional Indian crafts at the IHC, titled Kala Sangam. It is a collaboration between the IHC and the High Commission of India to invite traditional craftspeople from India to the centre, to demonstrate their crafts, promote this important aspect of the Indian community’s intangible cultural heritage, and share this with Singaporeans. 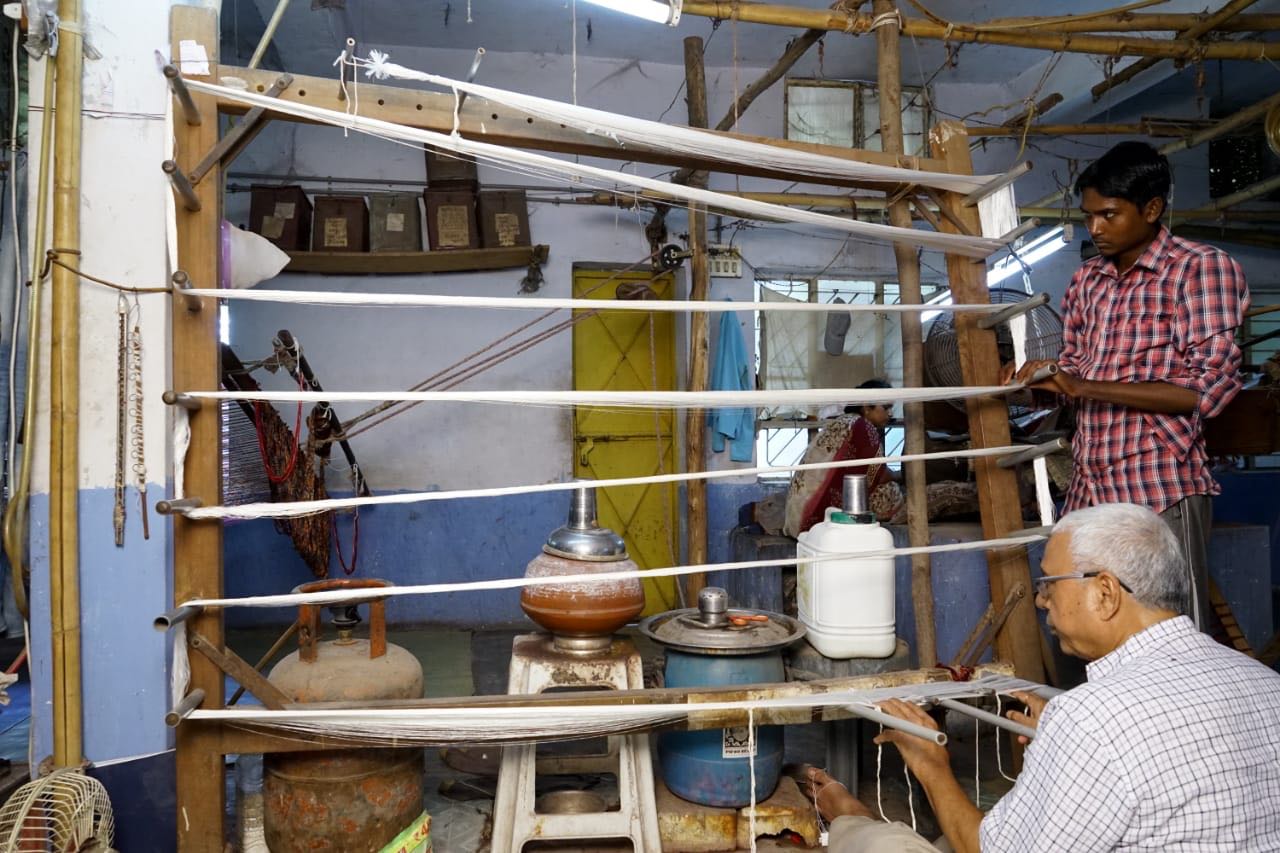 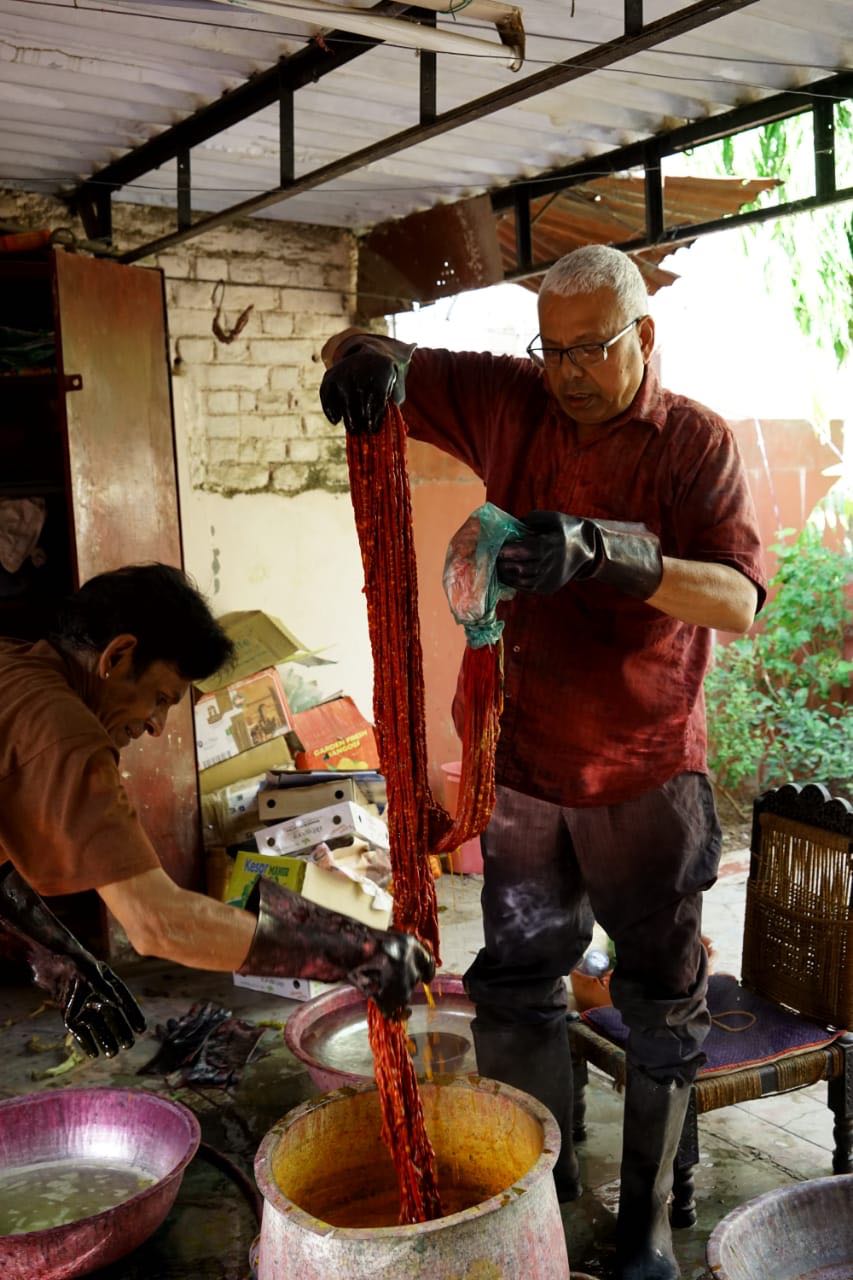 This is the second visit by Salvi to the Lion City to market his products. Photo courtesy: Patan Patola Heritage

It follows the success of the craft demonstrations which are a part of IHC’s ongoing special exhibition Symbols and Scripts – The Language of Craft, which features traditional craftspeople and calligraphers who showcase traditional Indian crafts that come from the hometowns back in India of Singapore’s Indian communities.

To learn more about the craft, visit their Facebook page.