Singapore-based author Damyanti Biswas's  thriller You Beneath Your Skin, set in New Delhi is now being made into a multi-part drama series. Over 65 tautly written chapters, Biswas draws the reader into the world of Indian-American psychiatrist Anjali Morgan and her autistic son Nikhil. An underlying theme through the how-dun-it is the tumultuous affair Anjali is having with senior police commissioner Jatin Bhatt that entails furtive lovemaking in five-star hotels and pillow talk in which the super cop quotes Ghalib.

But it isn’t just the protagonists that keep you riveted, the skill of Biswas is evident in the manner in which she makes the reader invest in the peripheral characters. The support cast is equally engaging.  Meet Maya, the feminazi who runs a detective agency but doesn’t realise she has a secret crush on her assistant. Pawan, her genial giant of an assistant, who falls back on the wisdom of the Sensei learnt in karate classes but breaks bones with nonchalance. Then there is Kusum, the hard-as-nails lady cop trying to voice her aspirations with her attempts at speaking English.  Among the antagonists Varun, who sees his super-cop father getting intimate with a family friend and grows up hating him for all the times he didn’t turn up for his parent teacher meetings, stands out.

One minor quibble. Given that the writer understands their motivations, having worked with a non-profit, one wishes she could have paid equal attention to the back stories of the acid attack survivors. But the manner in which she has made the sights, sounds and smells of Delhi come alive shows tremendous flair and writing nous.

In a freewheeling exclusive interview with Connected to India, Biswas opens up about her book brought out by Simon& Schuster India, the web series adaptation, the literary scene in Singapore, how she made the most of the lockdown and how she feels as a woman crime fiction writer living in a low-crime society. Edited excerpts:

C to I: How is the literary scene in Singapore, compared to the rest of the world and India in particular?

Damyanti Biswas: I’m too much of a hermit to comment on the literary scene in Singapore, but I’ve read wonderful work from poets like Arthur Yap, Cyril Wong, Felix Cheong, Edwin Thumboo, Madeline Lee, Ng Yi-Sheng. In fiction, I’ve learned a lot from works by Suchen Christine Lim, Catherine Lim, S Rajaratnam, Ovidia Yu, Alfian Sa’at, and also read novels and stories by authors based in Singapore like Lee Chang Rae, Amanda Lee Koe, Clarissa Goenawan, Akshita Nanda, among so many others.
The pandemic has affected the literary scene here just as in all other countries --making in-person events difficult to arrange, but there are many promising authors to watch out for. India’s literary scene is far larger, because the country itself is immense, and follows a diverse and much longer literary tradition. Although, given the push for literacy and literature by the Singaporean government, and the Singapore Writers Festival that draws luminaries from across the world, the literary scene here promises to remain quite vibrant over the coming years.

C to I: We hear your crime thriller You Beneath Your Skin is being made into a multi-part drama series. How is the progress on that project?

Damyanti Biswas: Given the pandemic progress is slow,  we can remain hopeful that the multi-part drama series optioned by Endemol Shine will be made soon.

C to I: They say writing is a solitary activity. How did the lockdown compelled by the pandemic work for you? Was it a productive or difficult phase for a writer such as you?

Damyanti Biswas: Writing is definitely a solitary activity, but there’s also a joy in the community. Even though I’ve not really interacted a lot in the local literary scene lately, I’ve found it hard to not be able to sit at a café with my trusty old laptop as often as I’d like. Personally, for me, it has been a productive phase otherwise, because I managed to polish up a short story collection, write and publish a few short stories in various magazines, and finish up a draft of my latest novel. I also have other news that I can’t talk about at the moment. With the productivity, I must acknowledge my privilege: I haven’t had to worry about my livelihood and have no children -- so it has not been as chaotic for me as for a lot of others. 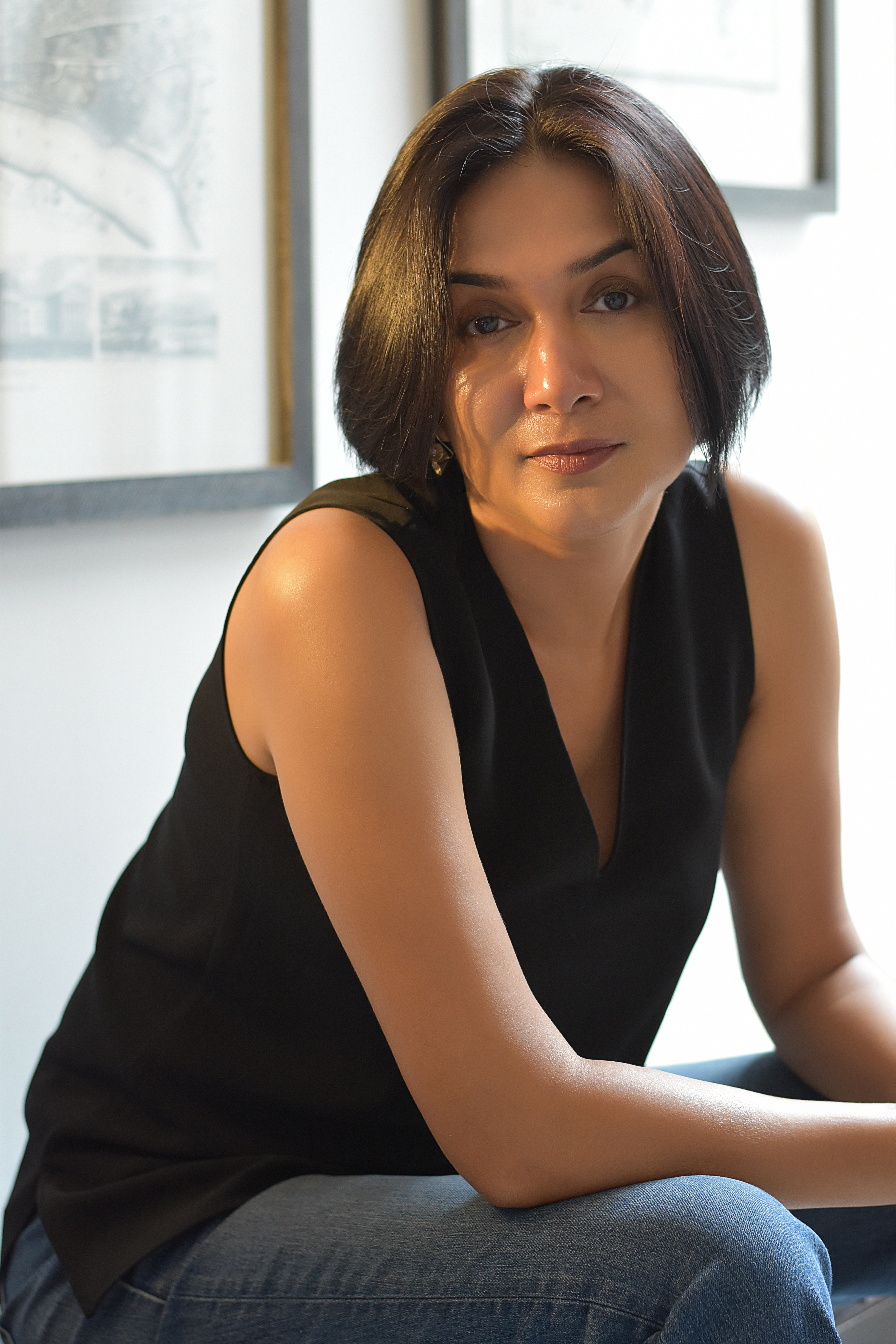 Acid attack survivors, says Singapore-based author Damyanti Biswas, are not defined by their trauma, but instead the spirit with which they have reclaimed their lives and place in society

C to I: You are an Indian Diaspora crime writer based in Singapore. Smoggy, smoky Delhi is like a character in your highly acclaimed book. You take the reader to its upscale neighbourhoods and malls, slums and bungalows. How did you manage to get the details of Delhi’s sights, sounds and smells so right?

Damyanti Biswas: I’ve lived in Delhi for many years, working in its slums, and more upscale locales. It has changed since then, but not in ways I cannot recognise. I’ve been going back often to volunteer and meet friends, and that has kept me in touch and given me perspective. While writing the final drafts of the novel one winter, I also went back and stayed there in order to conduct intensive and extensive research-- be it in the police stations, the slums, the roads, the eateries, the hospitals. I drove around the city, sat on its footpaths and its eateries, and visited each of the locations to ensure that the scenes were true to life at the time.

C to I: 'Low crime doesn’t mean there’s no crime' was a popular Singapore police slogan. How is it to stay in a relatively low-crime society such as Singapore for a crime thriller storyteller, given that you portrayed the underbelly of Delhi so well?

Damyanti Biswas: As a woman, living in Singapore is a delight because of how safe it is. The contrast made it easier for me to see how a woman is reduced to a second-class citizen in a city like Delhi—never able to seamlessly occupy the public spaces with the same ease as a man. In Singapore, I can dress for comfort and walk out alone to pick up an ice-cream late at night, go to a food-court or park and sit by myself to write without raising eyebrows, take a 3 am cab to the airport or talk without hesitation to just about anybody--all without worrying about my safety. If and when I leave Singapore, that’s the aspect I’ll miss the most. I may not ever have the conviction to set a thriller in Singapore (though life has taught me to never say never).

C to I: In movie parlance, you have etched out your peripheral characters as strongly as the lead cast in the novel. As a debut novelist, how tough was to strike that fine balance?

Damyanti Biswas: As an author, my role is to respect both my characters and my readers. My characters have agency and free will, which, funny as it sounds, is the only way to write a plausible, cohesive story. I must respect each character enough, be it a protagonist or a supporting cast, to understand and acknowledge their desires and their journeys. When a reader invests money, and more importantly, time, in reading You Beneath our Skin, I must value them enough to give them plausible, deeply realised characters and a well-woven story. That’s the reason the supporting cast of You Beneath Your Skin has received from me the same attention as its leads.

C to I: You’ve worked with acid attack survivors in real life. How much did it help in weaving their story into your narrative or empathise with them?

Damyanti Biswas: It would be an exaggeration to say I’ve worked with them—I wish to do so much more. The survivors have shared their stories with me over the years, and their brave and often moving accounts of their ordeal has helped me create a believable experience for the reader. At the outset, it was hard to interact with them because of my own inherent biases and fears, but they have taught me to treat them as who they are beyond their suffering. They are not defined by their trauma, but instead the spirit with which they have reclaimed their lives and place in society. My hope one day is for one or more of the survivors to write their own books in order to tell their own stories.