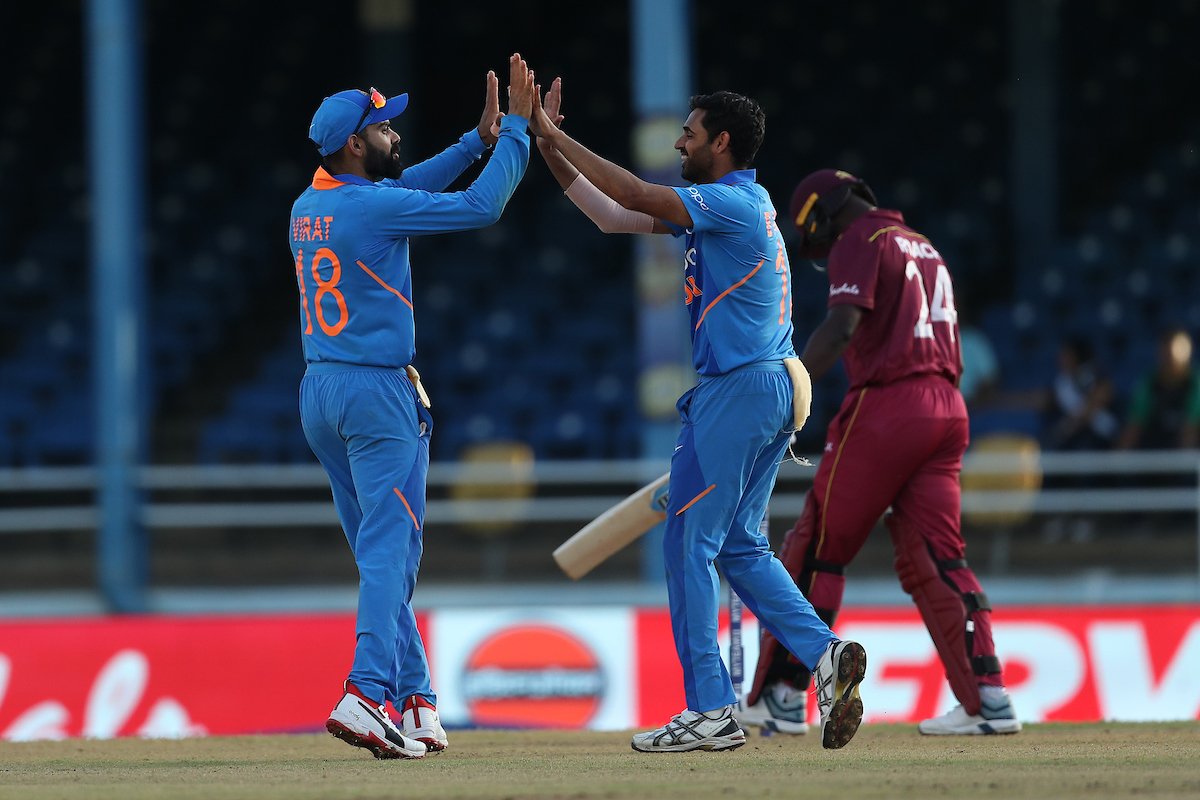 India beat the West Indies by 59 runs (Duckworth-Lewis method) in the 2nd ODI to take a 1-0 lead in the 3-match series after the first ODI was washed out. It was Chris Gayle’s 300th ODI but Virat Kohli and Bhuvneshwar Kumar ruined the party with match winning performances.

Electing to bat first, India lost both its openers early. Shikhar Dhawan (2 off 3 balls) fell in the very first over of the innings to Sheldon Cottrell. Rohit Sharma, who took till the 11th delivery he faced to get off the mark, never really got going. Eventually, he fell for 18 off 34 balls off the bowling of Roston Chase.

That's a 50-run partnership between the Skipper and his deputy.

However, Virat Kohli ensured that he kept the scoreboard ticking over finding the boundary at regular intervals. The skipper reached his fifty with a four to third man. At the other end Rishabh Pant ably assisted Kohli with a few boundaries off his own, before being bowled by Carlos Brathwaite for 20 off 35 balls.

Virat Kohli in absolute glorious touch here as he brings up yet another half-century. This is his 55th in ODIs 👏👏

The Windies stemmed India’s runs but Kohli kept at it, ably assisted by Shreyas Iyer. Having failed to convert five 50-plus scores into a hundred at the World Cup, Kohli finally ended his century drought with his hundred coming off 112 balls. He also surpassed Sourav Ganguly's tally of 11,363 ODI runs for India. Sachin Tendulkar (18,426) is now the only other Indian to have more ODI runs than Kohli's 11,406.

The Indian skipper eventually fell for 120 off 125 balls.

Here comes the CENTURY for #KingKohli 💯

Shreyas Iyer contributed with a solid knock of 71 off 68 balls, helping India reach 279/7 in their rain interrupted 50 overs.

Set the task of pulling off the highest successful chase at this venue, the West Indies didn’t get off to a great start. Chris Gayle became leading ODI run-scorer for the West Indies, going past Brian Lara, before he was out lbw to Bhuvneshwar.

REINTRODUCING the Universe Boss!🐐😎 The man with the most ODI runs in West Indies history!🙌🏾 WI Salute You! #WIvIND #MenInMaroon #ItsOurGame pic.twitter.com/GE2i77qavA

Shai Hope didn't last long either as he chopped a Khaleel Ahmed delivery onto his stumps - West Indies at 52/2.

Another spell of rain reduced the match by four overs with ten runs taken off the target. Struggling with a calf injury, Evin Lewis (65 off 80 balls) brought up his maiden ODI fifty at home but was dismissed by a fabulous one-handed catch by Kohli off Kuldeep Yadav’s bowling.

Nicholas Pooran (42 off 52 balls) kept the Windies hopes alive, showing no mercy to either Kuldeep or Kedar Jadhav. Meanwhile Chase (18 off 23 balls) assisted him by rotating the strike.

However, Bhuvneshwar Kumar returning for his second spell, scalped the wickets of both batsmen to put India ahead. Brathwaite and Kemar Roach didn’t last long and while Cottrell (17 off 18 balls) tried to up the ante towards the end, it was a little too late. India winning the match by 59 runs (D/L method).

Top win and top bowling from this guy . 🇮🇳👍 pic.twitter.com/TX5FkhpTCX