Democratic candidate for the post of US Vice President Kamala Harris condemned the confirmation of Amy Coney Barrett as a Supreme Court Justice, stating it was an "illegitimate process". 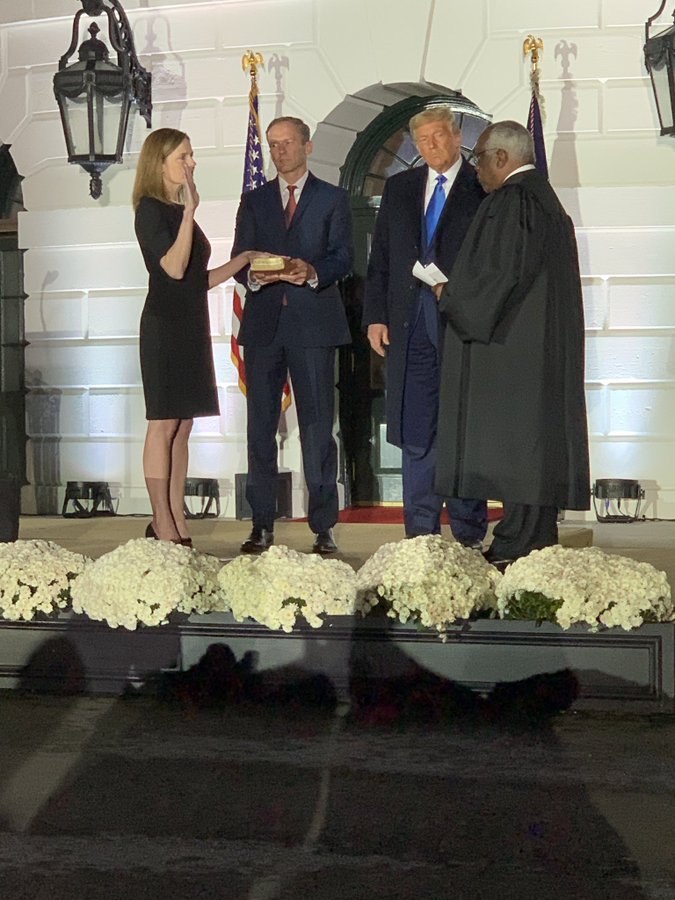 Barrett (left) was sworn in at a ceremony at the White House. Photo courtesy: Twitter/@SenBillCassidy

"Today Republicans denied the will of the American people by confirming a Supreme Court justice through an illegitimate process – all in their effort to gut the Affordable Care Act and strip health care from millions with pre-existing conditions. We won’t forget this," Harris wrote on Twitter late yesterday, after Barrett was sworn in at a ceremony at the White House, taking the first of the two oaths required for her to officially become a Supreme Court Justice.

The Senate voted 52-48 yesterday to confirm Amy Coney Barrett, giving the court a potential 6-3 conservative majority that could determine the future of the Affordable Care Act and abortion rights.

All Democrats in the chamber voted against Barrett’s confirmation, as did Republican Susan Collins of Maine, who agreed with Democratic objections to confirming a justice so close to the election.

House Speaker Nancy Pelosi said in a statement commenting on Barrett’s confirmation that the United States now had "a radical Republican court".

"Eight days from Election Day, after 60 million Americans have already cast their ballots, President Trump and the GOP Senate have committed an act of supreme desperation by jamming through a Supreme Court justice – all so that they can achieve their years-long campaign to destroy Americans’ health care," Pelosi said, adding that now "Americans must continue to make their voices heard in the election. Congress will have to reverse the damage of a radical Republican court and defend pre-existing condition protections together with every other benefit and protection of the Affordable Care Act."

Pelosi called Barrett’s appointment to the Supreme Court a "manipulation" that threatens the rights of the American people.

"We must have a Congress that is prepared to remedy what the Supreme Court will do to undermine the health, financial security and well-being of American families," Pelosi said.

The US Supreme Court had a vacant spot after Ginsburg, 87, died in September of complications from metastatic pancreatic cancer at her home in Washington.

The Supreme Court is expected to take up the latest lawsuit challenging the constitutionality of the Affordable Care Act. The court has previously rejected other constitutional challenges to the law, widely known as Obamacare.