Indian students revolutionize campus life in US through the UNIBEES App

UT Dallas graduate students Abinav Kalidindi and Chandra Achanta have created UNIBEES, an app that helps other students find freebies and giveaways on campus. They remember the day, after they arrived on campus, when they saw students carrying multiple slices of pizza. 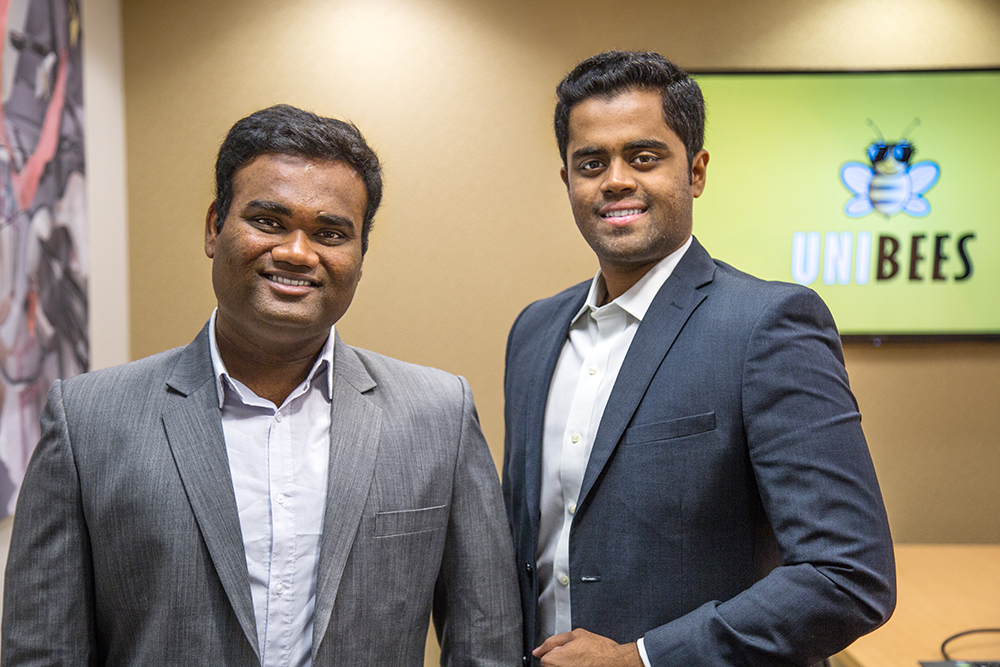 “We knew there must be free food at an event that we hadn’t heard about. We did some research on how to get that into people’s hands,” said Achanta, a business analytics master’s student at the Naveen Jindal School of Management.

They made it happen by developing a phone app called UNIBEES to help other students find freebies and giveaways on campus.

What Kalidindi calls “the power of free” has attracted 12,000 users on four campuses to their app.

It’s a one-stop shop for Generation Z users, who are not as likely to check official University media or use traditional social media like Facebook, said Kalidindi, a finance master’s student.

Inception of the concept

For the app’s name, the developers said they drew inspiration from honey bees that collect nectar from a variety of sources and bring it back to the hive.

Achanta and Kalidindi started by posting information from the University’s social media, the Comet Calendar and OrgSync, the Student Organization Center's web application. Event organizers can also sign up for the app and post events, concerts and parties. After moderators check the post, it goes live for all users to see.

Anyone with an email account ending with utdallas.edu can download the app and complete a UNIBEES profile. A “remind me” feature will send alerts about events based on a user’s interests.

The app’s “Buzz” feature lets users indicate they are attending an event, which generates more interest among other students. Users can also access the app’s interactive features to ask questions about an event.

“It’s very much an explorational tool, but students get hooked on the social aspect of it, too,” Kalidindi said.

The duo, who are both from India, said they have taken advantage of entrepreneurship programs at UT Dallas to launch their app.

The Jindal School's Institute for Innovation and Entrepreneurship (IIE) provided seed money and also helped Achanta and Kalidindi tap into a network of conferences, mentoring and competitions.

“Networking was the key part of our journey — meeting the right people,” Kalidindi said.

UNIBEES also received USD5,000 by placing second out of 109 other startups at the UT Dallas Big Idea Competition last year.

“Having whiteboards, markers and a conference room helped us with our brainstorm sessions. That’s where it all started,” Achanta said. “You also get ideas from others in a co-working environment, and you have space to meet with potential investors.”