The Indian Minister of External Affairs Sushma Swaraj has praised the diplomatic community for playing a key role in promoting Yoga all over the world in a matter of just a few years. 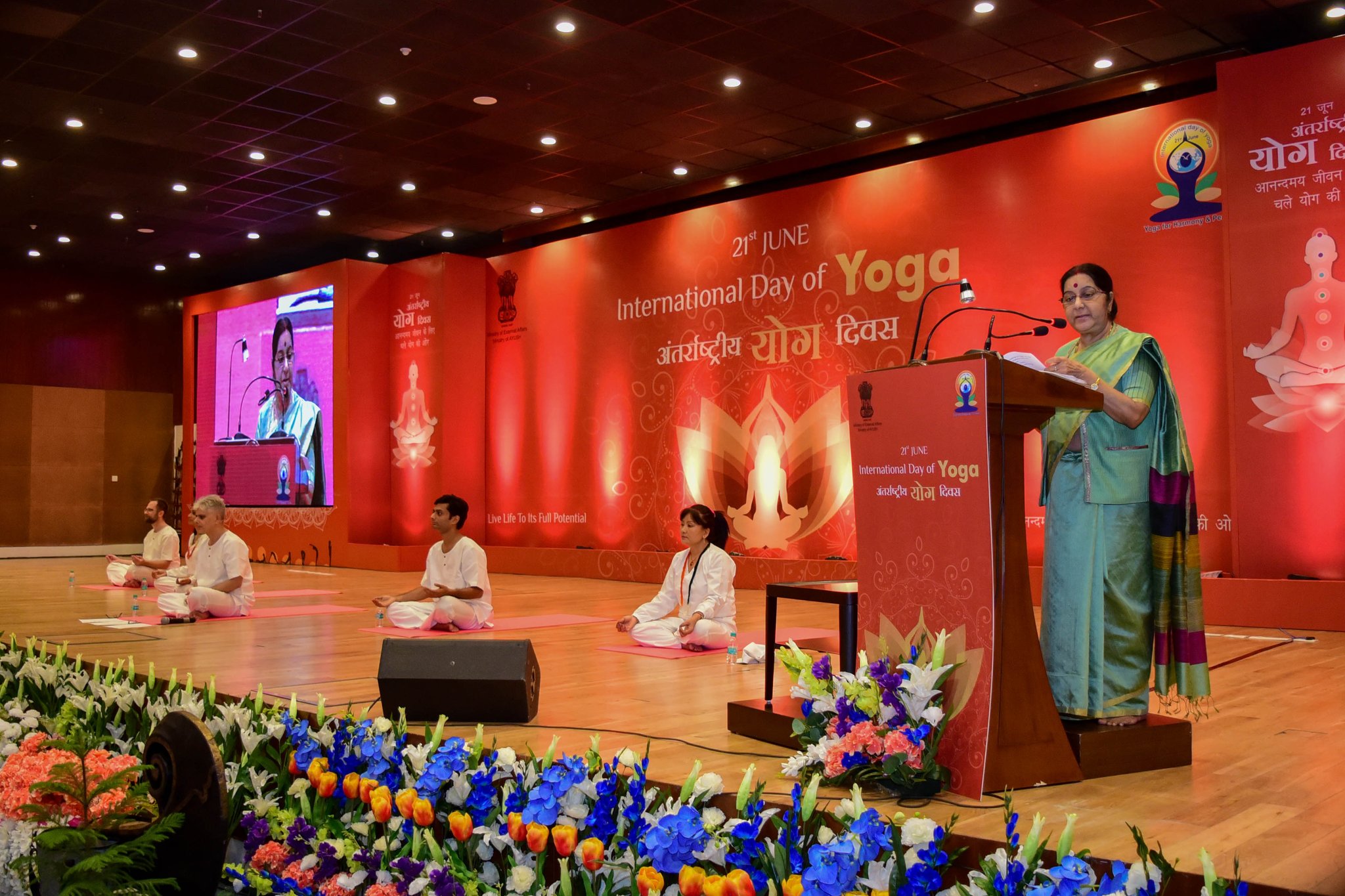 "While we were happily spreading the light of Yoga in the rest of the world we realised this year that we should also involve the diplomatic community in New Delhi who are already contributing in spreading this ancient heritage," Swaraj said, addressing diplomats at the Pravasi Bharatiya Kendra here where they had come together to celebrate the Third International Day of Yoga yesterday.

In a unique event, the first of its kind, the Ministry of External Affairs in collaboration with the Ministry of AYUSH, organised a special yoga session for the 3rd International Day of Yoga (IDY) for nearly 100 diplomats from scores of diplomatic missions in New Delhi. The participation at the Pravasi Bharatiya Kendra was led by Swaraj and attended by MEA officers.

In her brief remarks at the beginning of the event, the minister recalled global support for Prime Minister Narendra Modi's initiative in 2014 for the United Nations to designate 21st June as International Day of Yoga.

"It’s my great pleasure to see all of you here at this special of event on the occasion of the 3rd International Day of Yoga. When Prime Minister Modi had called for observing 21st June as the International Day of Yoga at the UNGA in September 2014, little did we realise that this proposal will receive such unprecedented response," the minister said.

"His call led to the consensus resolution co-sponsored by a record 177 countries and was adopted within a record time of 75 days," the minister added. 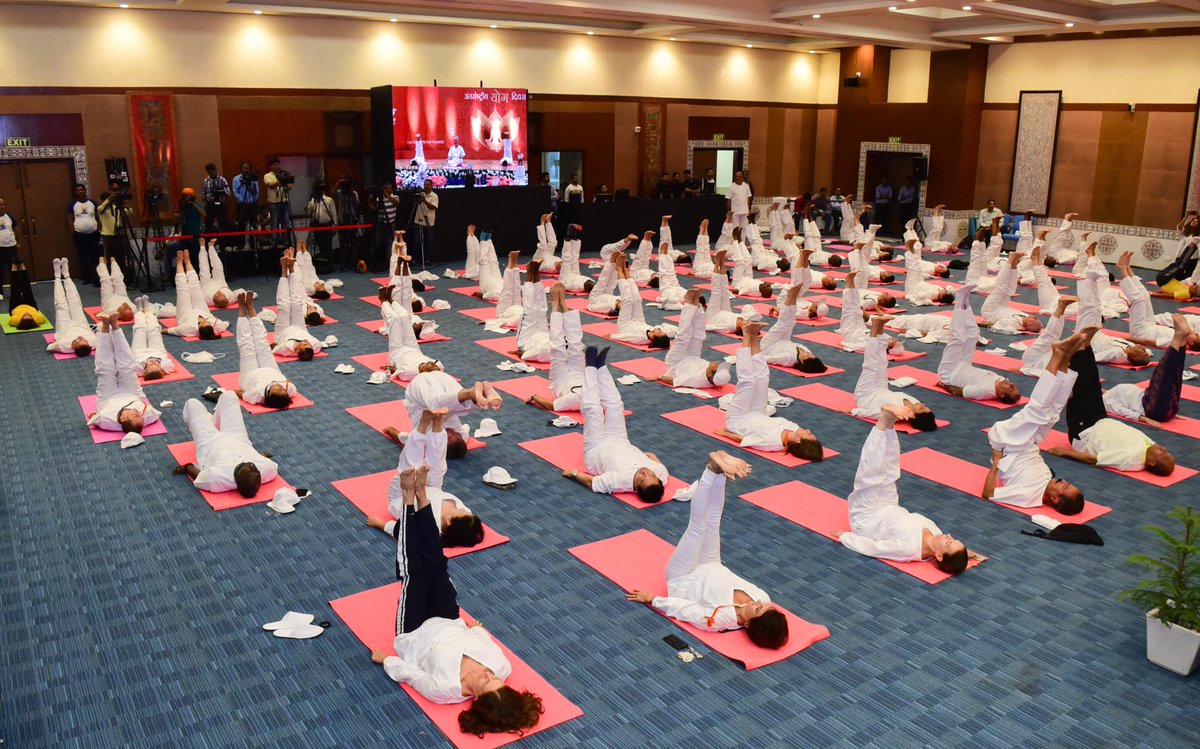 ​Swaraj noted that over the last two years Indian Missions and Posts all over the world "channelised great enthusiasm and interest" for yoga in their host countries. Special events at iconic global locations across the globe have taken place with the participation of hundreds of thousands of Yoga enthusiasts at several places. heads of States, heads of Governments, senior dignitaries and celebrities have graced these events.

"Excellencies, Yoga is not merely about physical well-being through Asanas or Postures or Pranayam or breath control. It is a science to attain inner-peace, it is the art to attain equanimity. It is a full system to arrive at harmony within ourselves, with nature, and with the world. Therefore we will end today’s Yoga session with prayers for the World Peace or Shanti Prarthana," Swaraj added.

She chanted 11 Shlokas of ancient Indian prayers for peace, brotherhood and harmony. Diplomats chanted after her.

During the event, the Acting Dean of the Diplomatic Corps, ambassadors, high commissioners and diplomats of several countries twisted, turned and stretched, practiced key asanas and pranayam, synchronising their breath with their movements and with the energy of thousands of yoga practitioners all over the world. There was considerable enthusiasm on the occasion and with diplomats turning out in large numbers from the missions of countries near and far, the main auditorium of the Pravasi Bharatiya Kendra was packed to capacity. 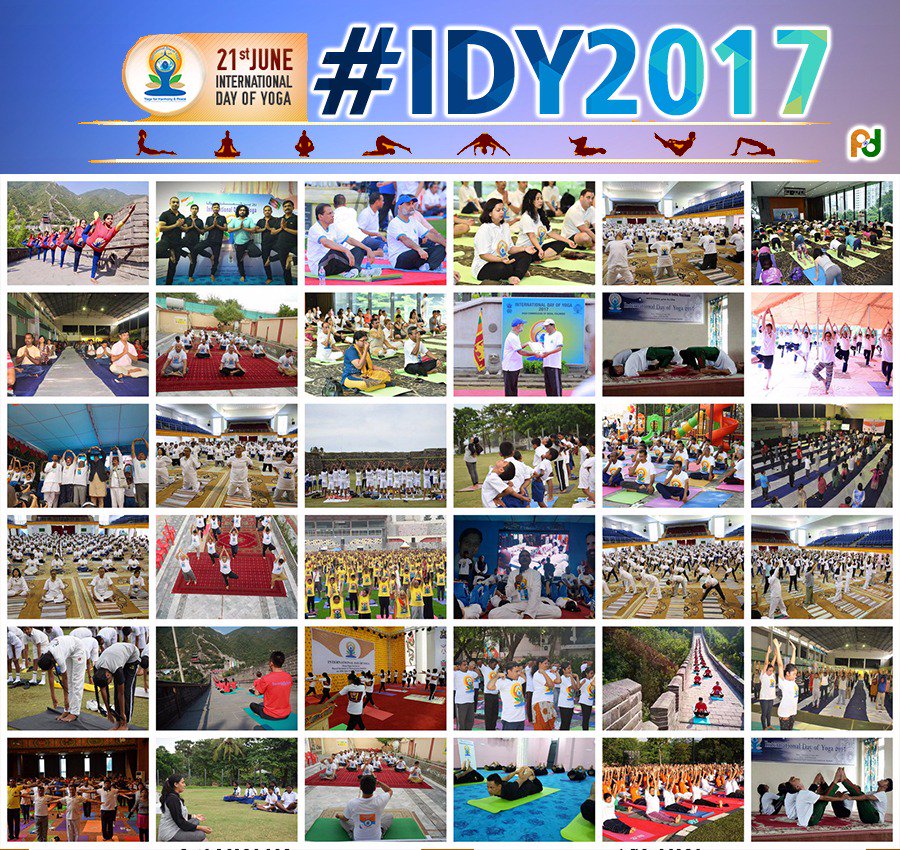 International Day of Yoga was observed at diplomatic missions across the world.