Slamming foreign individuals and entities for comments on the ongoing farmer protests, the Indian Ministry of External Affairs today said it is “unfortunate to see vested interest groups trying to enforce their agenda on these protests, and derail them”. 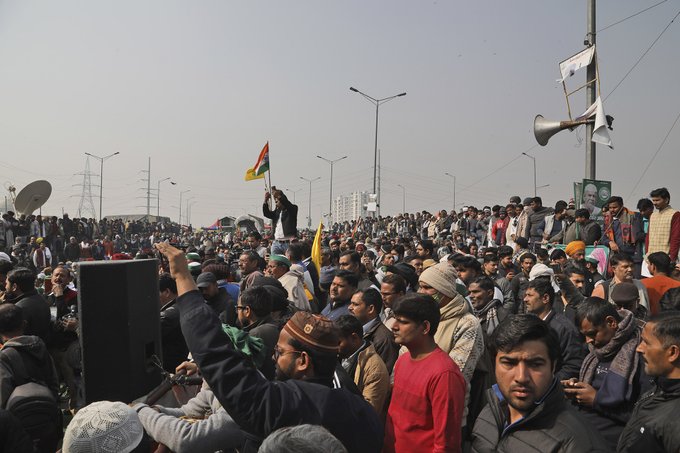 Hundreds of thousands of protesters have blocked the borders of the Indian capital for over two months. Photo courtesy: Twitter/@hrw

In a detailed statement, the MEA said that the Parliament of India only after a “full debate and discussion” had passed reformist legislation relating to the agricultural sector.

Defending the three contentious farm laws, the MEA said the reforms intend to give expanded market access and provide greater flexibility to farmers. “They also pave the way for economically and ecologically sustainable farming,” the MEA statement read.

"Before rushing to comment on such matters, we would urge that the facts be ascertained, and a proper understanding of the issues at hand be undertaken. The temptation of sensationalist social media hashtags and comments, especially when resorted to by celebrities and others, is neither accurate nor responsible," it added.

International pop star Rihanna yesterday extended her support to the farmers protesting on the outskirts of Delhi against the centre's agricultural laws, condemning the internet shutdown aimed at crippling the movement.

"Why aren't we talking about this?! #FarmersProtest," tweeted the 'Don't Stop The Music' singer, who happens to be the fourth most-followed user on Twitter with more than 100 million followers, along with a news article about the internet blockade.

Taking to microblogging site Twitter, Great Thunberg, the Swedish climate activist said, "We stand in solidarity with the #FarmersProtest in India." Other celebrities such as Indian-Canadian late night talk show host Lilly Singh, Punjabi actor Diljit Dosanjh and Bollywood actress Swara Bhasker had also come out in support of the farmers.