Speaking at the 'Namaste Trump' event to over one lakh people in Ahmedabad's Motera Cricket Stadium, Indian Prime Minister Narendra Modi and US President Donald Trump on Monday said India and the US are "natural partners" and share a friendship that is built on trust and a shared value for democratic principles. 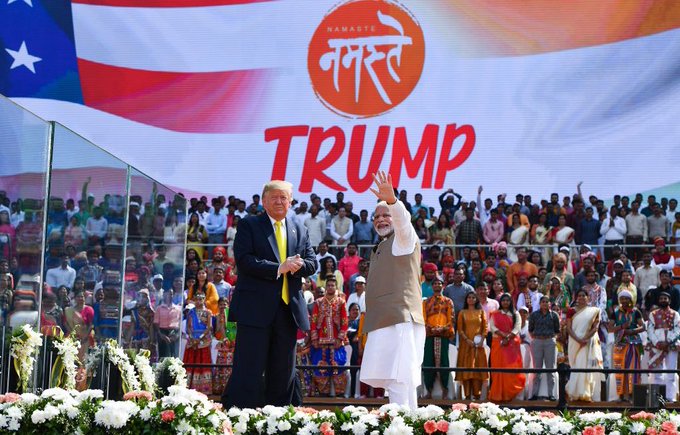 PM Modi and President Trump at the 'Namaste Trump' event at the Motera Cricket Stadium in Ahmedabad. Photo courtesy: Twitter/@realDonaldTrump

"Our partnership cannot just contribute to the stability of the Indo-Pacific region, but also contribute towards resolving many other global affairs," PM Modi said. He said the Indo-US bilateral relationship is inspired by a long-term vision and not by short-term goals.

"Today, the US is India's biggest trading partner. The US is also the nation with which India holds the most number of defence exercises and has the most expansive research collaborations," he added, hinting at India's desire to sign a new trade agreement with the US.

Addressing the 'Namaste Trump' event at the Motera Cricket Stadium in Ahmedabad, President Trump announced that the US will seal defence deals worth USD 3 billion on Tuesday. 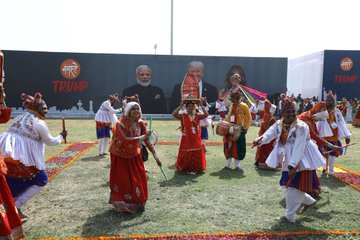 Dance groups and singers from different parts of the country performed on stages that dotted the 22-km route of the 'India roadshow' in the city. Photo courtesy: Twitter/@vijayrupanibjp

Trump and his wife Melania received a colourful welcome after landing in Ahmedabad. Dance groups and singers from different parts of the country performed on stages that dotted the 22-km route of the 'India roadshow' in the city.

Huge billboards of the two leaders and replicas of historic places in Gujarat, Modi's native state, were placed along the roads where people greeted the two leaders. 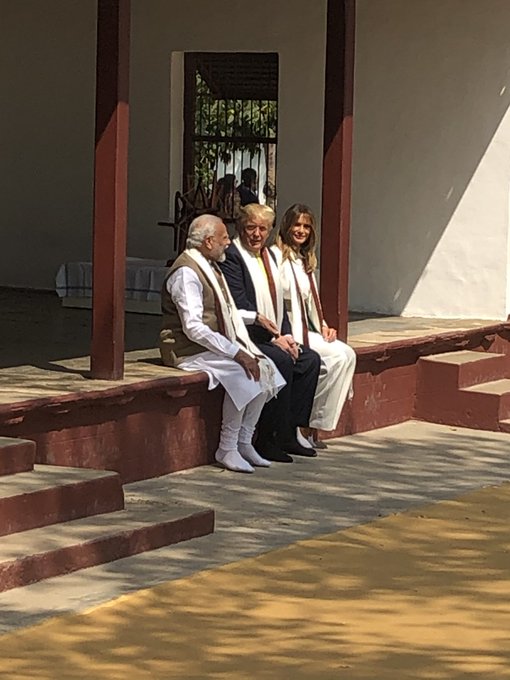 Over 10,000 police personnel, besides officials of the United States Secret Service, and personnel of the National Security Guards (NSG) and the Special Protection Group (SPG) were deployed for the high profile visit.

Trump and Modi headed to Sabarmati Ashram before the Motera event.

During the visit, Trump and Melania also tried their hands at the charkha.

"India looks forward to welcoming @POTUS @realDonaldTrump. It is an honour that he will be with us tomorrow, starting with the historic programme in Ahmedabad," PM Modi had tweeted earlier.

The two leaders are expected to sit down for restricted and delegation-level talks at Hyderabad House in New Delhi on Tuesday.