If Srinidi Mohan’s research turns out to be fruitful, then a simple blood test could be used to detect breast cancer.

Srinidi Mohan, an Indian-American who works as an assistant professor at the University of New England College of Pharmacy has been awarded TechStart Grant and Seed Grant from the Maine Technology Institute for his innovative breast cancer detection and disease monitoring method. 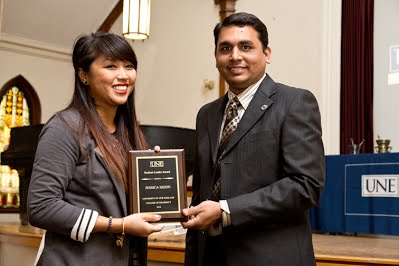 The discovery was an accident as Mohan was studying nutritional supplements. Photo courtesy: College of Pharmacy Awards and Honors

According to the reports, the discovery was an accident as Mohan was studying nutritional supplements when he came across the molecule that may lead to early detection.

Mohan who has never studied breast cancer previously claims that the research may be in the early stages and needs to go through clinical trials, but the initial results are promising. He also needs to work on the patent and the testing kit.

As per the release by the university, “The ER-negative tumors are more aggressive and harder to treat than ER-positive tumors. This type of breast cancer, which has a higher incidence in African Americans and younger individuals, has nearly twice the risk of mortality as compared to ER+ breast cancer.”

It could be also used to monitor the effectiveness of treatments on patients and as a test for new therapies.