Exhorting businessmen to take advantage of a liberalised investment regime, Vice President of India Hamid Ansari has said India is a natural destination for markets and business opportunities for Poland.

"A strong economic interaction between India and Poland is an indicator of the growing economic strengths of our countries. As Polish business looks for markets and business opportunities beyond Europe, India is a natural destination," Vice President Ansari said while addressing the Indian and Polish business community at a summit organised by the Ministry of Economic Development in Warsaw on Thursday.

​Ansari noted that Poland was India’s largest economic partner in Central Europe with bilateral trade that has grown to USD 2.8 billion in 2016 and investments were growing rapidly in both directions.

The summit was attended by the Polish Prime Minister Beata Szydło, Deputy PM and Minister of Development and Finance Jerzy Kwiecinski, and the Indian Minister of State for Micro, Small & Medium Enterprises (MSME) Giriraj Singh among others.

The Vice President pointed out that constant reforms in fiscal and investment policies were transforming the economic scenario in India and a landmark Goods and Services Tax(GST) reform was aimed at making India a unified market, with all 29 states offering an identical and predictable tax environment.

"Increasing transparency and a liberalised investment climate now allows the smooth flow of FDI in sectors like defence, railways, civil aviation and pharmaceuticals. We have seen a strong global confidence in the India story, with a surge in Foreign Direct Investments, which reached over US $ 50 billion in 2016," Ansari observed.

He said India’s 29 states now offer a climate of both cooperative and competitive federalism, with quantum improvements in investment conditions in different Indian states. "Some Polish regions are already availing of the business opportunities that Indian states offer," he noted.

Observing that the education sector could become an important area of cooperation, Ansari said India’s young were eager to seek educational opportunities in Poland which already has about 2500 Indian students. "These students add to the resources of Poland’s distinguished universities and will act as bridgeheads for our future engagements." he said.

Ansari lauded the visit of a delegation led by Deputy Prime Minister Piotr Glinski to Vibrant Gujarat Summit in January. "I believe there were useful interactions with our political leadership and our business community. I am sure that the genius of our businessmen, on both sides, with their sense of adventure and innovation, will result in a many more mutually beneficial ventures," he said. 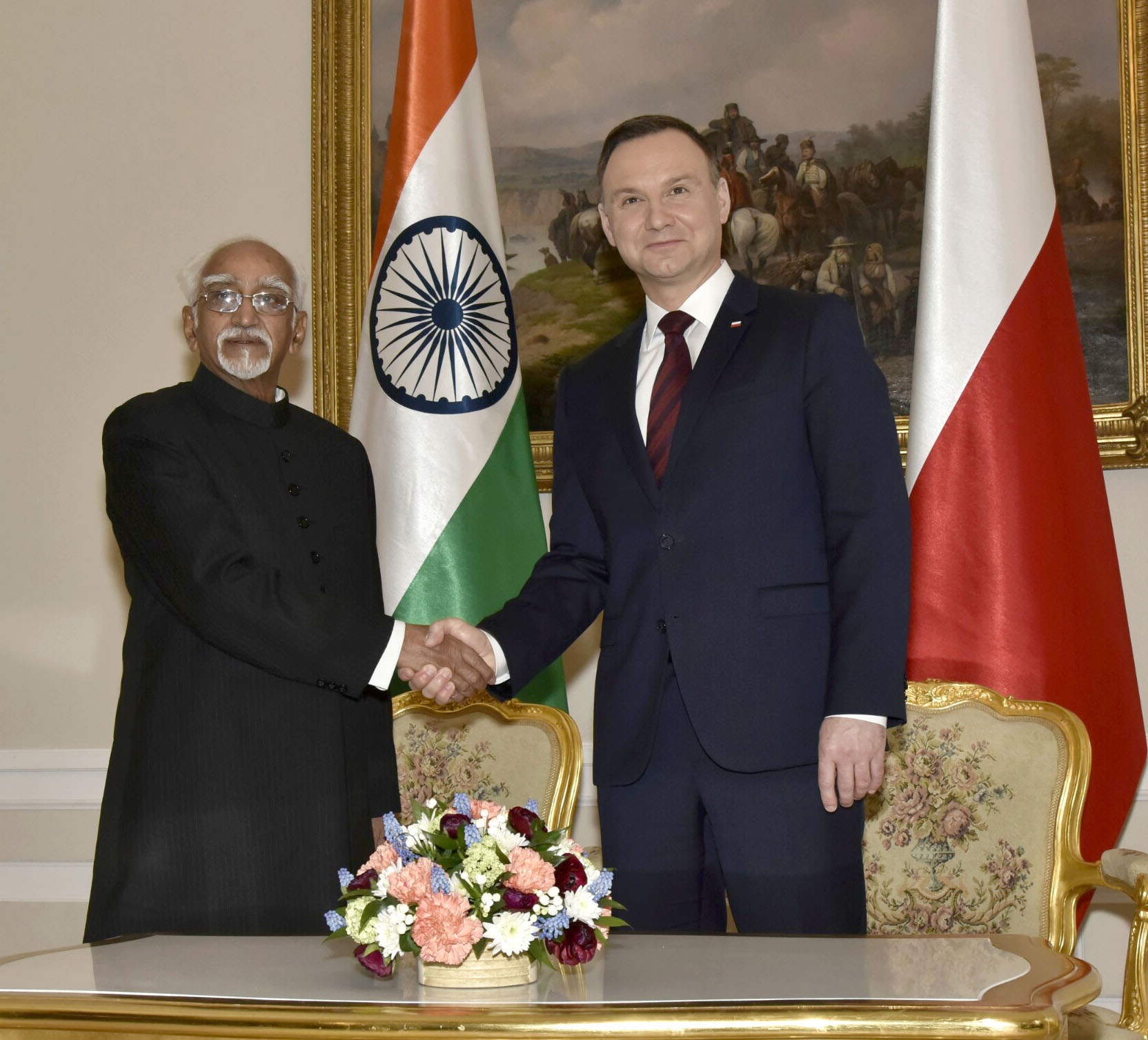 Ansari's visit is expected to boost sagging imports from Poland, though exports have steadily risen over years save for a slight dip in 2015.

"We have about USD3 billion dollars investment in Poland that provides employment to more than 25,000 workers. So that is a very good example of Indian investments create jobs locally... as well as helps develop economy of the country. In turn, India has liberalised several sectors including the defence sector. We would welcome Polish investment in India," Ministry of External Affairs Secretary(East) Preeti Saran told the media in a briefing before the Vice President's departure.

A 4,600 strong Indian community in Poland consists of traders dealing in textiles, garments, and electronics. They came after the collapse of communism. There are also professionals with multinational or Indian companies and software and IT experts.

The embassy of India in Warsaw issues around 20,000 visas annually for Poland and Lithuania. Under e-TV scheme of India over 6500 Polish nationals have visited India till April 2016, indicating rising number of Poles availing of e-TV visa facility.

There are over 60 Indian restaurants in Poland, half of them in Warsaw alone.