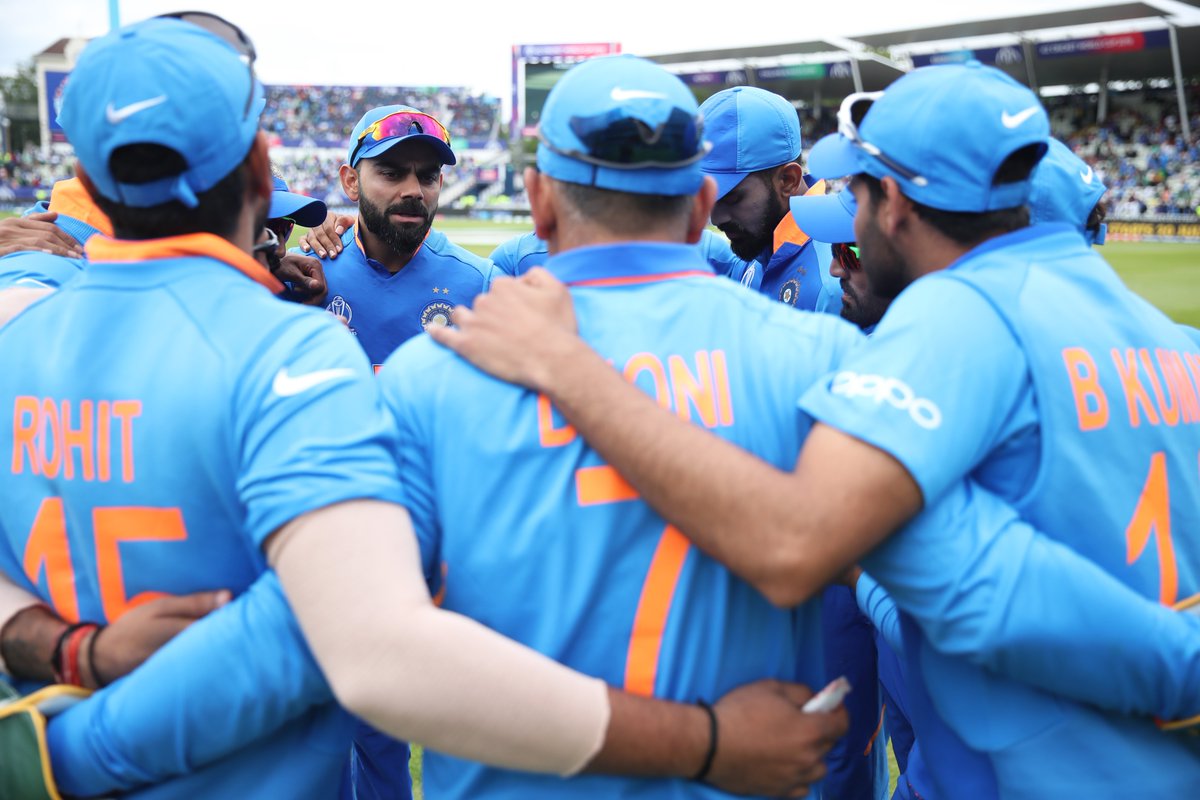 India became the second team to reach the semi-final of the 2019 ICC World Cup after their win over Bangladesh in Birmingham yesterday.

Virat Kohli won the all important toss and unsurprisingly elected to bat first - Bangladesh’s bowling has been consistently weak throughout the tournament and in all matches where they have bowled first, they have leaked runs.

What a unit. We march on. Jai hind 🇮🇳 pic.twitter.com/uDiih3fFiD

It all went pretty much to script for India - a big opening partnership, a clinical bowling performance and even though Bangladesh ran them close, India never really looked worried. In the end the Men in Blue won by 28 runs, knocking Bangladesh out of the tournament.

Here are some of the highlights.

Rohit Sharma really cannot put a foot wrong in this tournament. Some of his knocks have looked a little scratchy but he is cruising through the World Cup with four centuries and one half-century to his name in seven innings.

Against Bangladesh, the opener looked confident and was finding the middle of the bat consistently, while KL Rahul at the other end was looking much more uncomfortable.

Rohit has had his fair share of luck in more than one game and the match against Bangladesh was no different - Tamim Iqbal dropping a sitter at deep square leg when Rohit was on 9.

Like on all previous occasions, Rohit once again made the opposition pay dearly for the dropped catch. The opening pairing of Rohit and Shikhar Dhawan often saw the latter take on a more aggressive role. But with Dhawan out of the World Cup and a still struggling Rahul at the other end, Rohit is making sure he gives India the start they need each match.

Rahul picked up pace after reaching 20, ultimately finishing with 77 off 92 balls. But it was really the Rohit Sharma show on the day, as he made 104 off the same number of balls as Rahul, with 7 fours and 5 sixes.

"In my opinion he is the best one-day player around, he is having the tournament of his life and when he plays well everyone has so much confidence. When he plays well we know we are heading for a big score. He gives everyone confidence to go out and bat," said Kohli, praising the opener.

Rohit is now the first Indian and the second batsman overall (apart from Kumar Sangakkara) to score four centuries in a single edition of the World Cup.

Superb consistency from @ImRo45 , his 4th Century in this World Cup and he has laid the foundation for India to pose a huge total. #INDvBAN pic.twitter.com/aIEMjMx171

India went from 180/1 in 29.2 overs to 314/9 at the end of their innings - the middle order once again failing to capitalise on a good start by the openers.

There were flashes of brilliance from batsmen other than Rohit and Rahul - Virat managed a quick 26 off 27 balls before falling to Mustafizur Rahman; Rishabh Pant finally found his confidence, smashing 48 off 41 balls; and Dhoni chipped in with 35 off 33 balls.

It was a steady performance by the Indian batting but with the start they had the Men in Blue at one point had looked good for a 350-plus score. However, Bangladesh’s bowlers kept making inroads, chipping away at the Indian batting with regular wickets.

Innings Break!#TeamIndia post a total of 314/9 after 50 overs. A 5-wkt haul for Mustafizur #CWC19 pic.twitter.com/ZOAHsebwZn

Mustafizur was the pick of the Bangladesh bowlers, with figures of 5/59 in his 10 overs - his fourth five-for in ODIs and his third against India. Mustafizur and Shakib Al Hasan were the only two Bangladeshi bowlers to finish their quota of 10 overs with skipper Mashrafe Mortaza using as many as 7 bowlers.

India only managed 63 in their last ten overs, taking them to an average score of 314/9.

Bangladesh did well to restrict India to 314/9 but they were never really in the chase despite moments of brilliance by Shakib, who is having a dream World Cup - he has now become the first batsman ever to score 500-plus runs and take over 10 wickets in a single edition of the World Cup.

Shakib Al Hasan has had a phenomenal #CWC19.

Today, he became the first player to have scored more than 500 runs and taken more than 10 wickets in a single World Cup 👏 👏 👏 #BANvIND | #RiseOfTheTigers pic.twitter.com/WgRdF11lVH

Bangladesh lost wickets at regular intervals as they began their chase - seven of their top eight batsmen got past 20, but no one played the big innings that was needed to beat India. Only two of them went on to score half-centuries - Shakib (66 off 74 balls) and number 8 batsman Mohammad Saifuddin (51 off 38 balls).

Bhuvneshwar Kumar (1/51) and Jasprit Bumrah (4/55) were at their economical best, both going at just over 5 an over.

Bumrah with the crucial breakthrough 👏👏

"Whenever I practice in the nets, I practice each and every situation be it with the new ball or bet it with the old ball. If I have ticked all the boxes in the net, then in the match it is all about execution. So, all that preparation helps me in the match and if the work ethic is good, then execution feels much easier," said Bumrah after the match.

Hardik Pandya, the fifth bowler really stepped up to the plate, varying his pace and hitting the pitch hard, ending with 3/60, including the big wickets of Soumya Sarkar and Shakib Al Hasan.

My reaction when Rohit tells me we’re in the semifinal 😂🏆 Come on #TeamIndia 🇮🇳 pic.twitter.com/o1iUCPPd91

Despite late heroics by Sabbir Rahman and Saifuddin, India dismissed Bangladesh for 286 in 48 overs, for a 28-run win and a place in the semi-finals.

Bangladesh can certainly walk away from the tournament with their heads held high, having beaten South Africa, West Indies and Afghanistan along the way. A sentiment echoed by their coach Steve Rhodes who said, “I wish luck to the guys who are in that semi-final, but I wish it was us. I am very proud with the way we played against the big teams. Maybe we will be the people's team for the amount of fight we have shown.”

A place in the semi-finals for #TeamIndia as they beat Bangladesh by 28 runs 🇮🇳🇮🇳💙💙 #CWC19 #BANvIND pic.twitter.com/R3vSMsc8hD

India will now face Sri Lanka on July 6 while Bangladesh have one game left against Pakistan on July 5.

Congratulations to #TeamIndia for making it to the #CWC19 semi-finals. It turned out to be a thriller of a game.
Loving the way Rohit is batting in this tournament & shouldering the responsibility consistently. #INDvBAN pic.twitter.com/FM2gpEyXck

Congratulations #TeamIndia for making it into the Semi Finals 🇮🇳 What a fantastic game by the entire team 🏏 #BANvsIND #ICCCWC2019 #Rohit #Bumrah INDIAAAA 🇮🇳👏💪🤩 #Ting pic.twitter.com/jbdBBFSJH5

Congratulations to #TeamIndia for making into the semi-finals of the #CWC19.

Kudos to @ImRo45 for a perfect ton and @Jaspritbumrah93 for a match winning spell.

All the very best for the future games. pic.twitter.com/a9DO5s0QkE