Heng Swee Keat extols grit and determination of pioneers as he calls for a multi-racial, multi-cultural and open Singapore

It was a perfect occasion for Finance Minister of Singapore Heng Swee Keat to talk about inclusion at various aspects and levels in the Singapore society. The affable Minister was the Chief Guest at the launch of a food heritage book called, ‘They came from Jaffna' and the audience, a motley group of members of Sri Lankan, Indian, Chinese and Malay communities.

Delving deep into the contributions made by the pioneers of Singapore, the Minister said, “The pioneers faced many dangers and difficult times - the Japanese occupation, the anti-colonial struggle, race riots, the fight against communism and our separation from Malaysia. These experiences shaped our identity as a nation.” 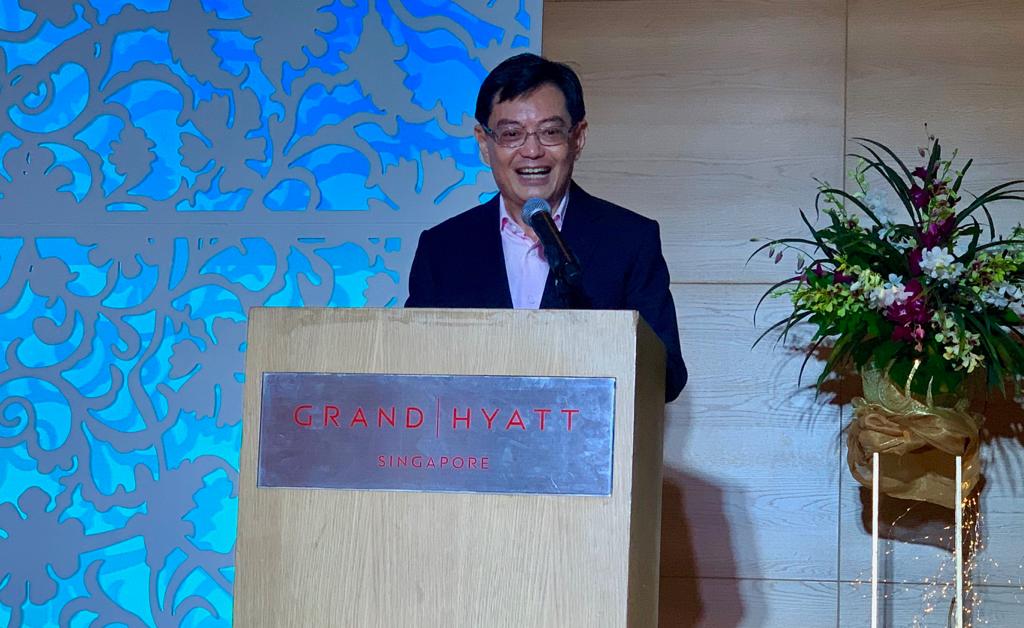 Finance Minister of Singapore Heng Swee Keat addressing guests during the launch of a food heritage book at Grand Hyatt in Singapore. Photo: Connected to India

“Our great grandparents and grandparents accepted hardship, persevered, and built better lives for themselves and their families. In doing so, they put Singapore on a path of development, and transformed Singapore from a third-world country into a modern metropolis,” he added.

Indra R L Iswaran (69) has written the book which contains more than 300 food recipes reflecting the multicultural interactions she experienced in Singapore.

She has Tamil roots from Ceylon  (Sri Lanka). The book also traces the journey of the Singapore Ceylon Tamil community from how they came to Malaya and Singapore such as Iswaran's grandmother Meenachi, who ‘braved the winds of change’ and sailed from Jaffna, a city in Sri Lanka, in the 1890s. 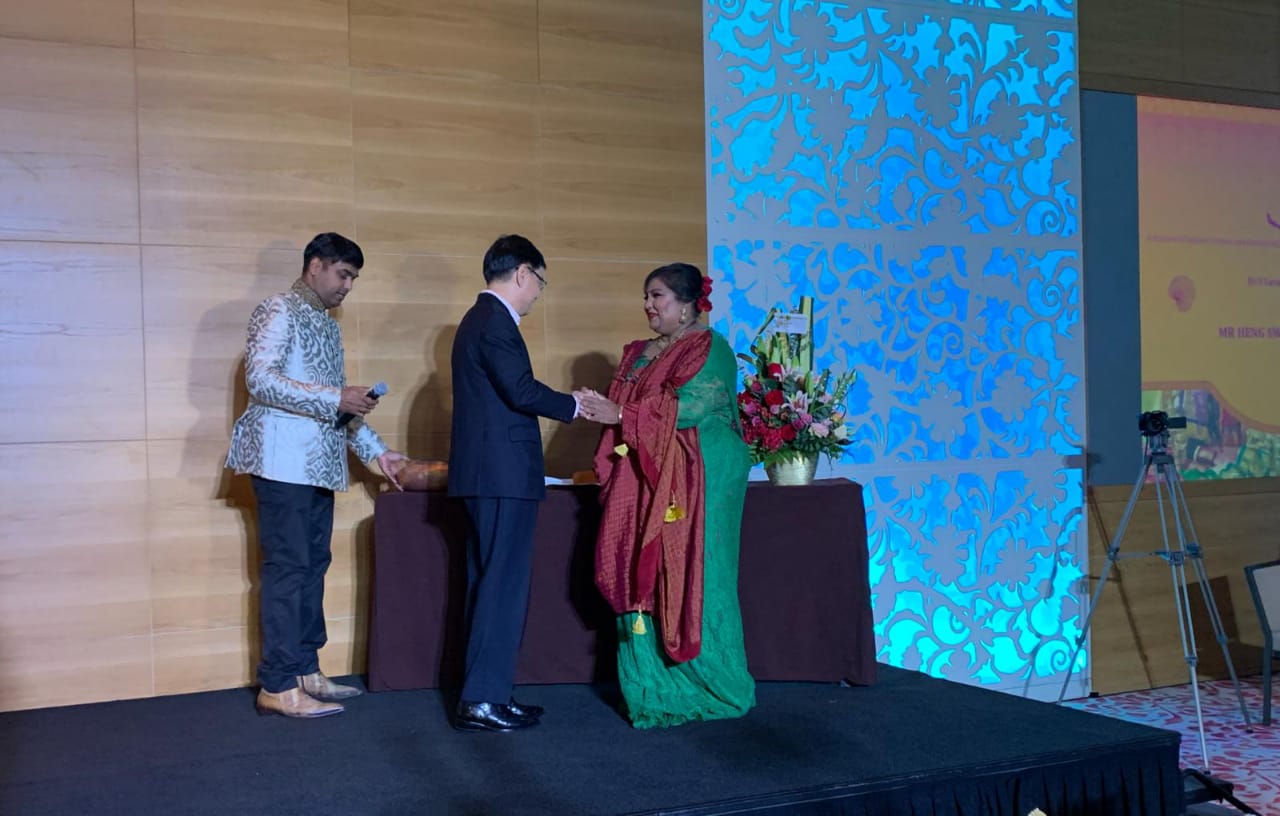 Finance Minister of Singapore Heng Swee Keat congratulating Indra R L Iswaran for writing the book which contains more than 300 food recipes and offers a peek about the contributions of Ceylon Tamils in the development of Singapore. Photo: Connected to India

The Finance Minister also picked up a phrase from the book and said that for Singapore, braving the winds of change also means ensuring society remains multi-racial and multicultural.

“Over time, our different races and religions mixed with one another, helped one another, and forged a common understanding. The circles of trust expanded. Our pioneers knew that for us to survive as a nation, we cannot be divided as a nation,” said Heng.

He was addressing about 170 guests at Grand Hyatt Singapore. 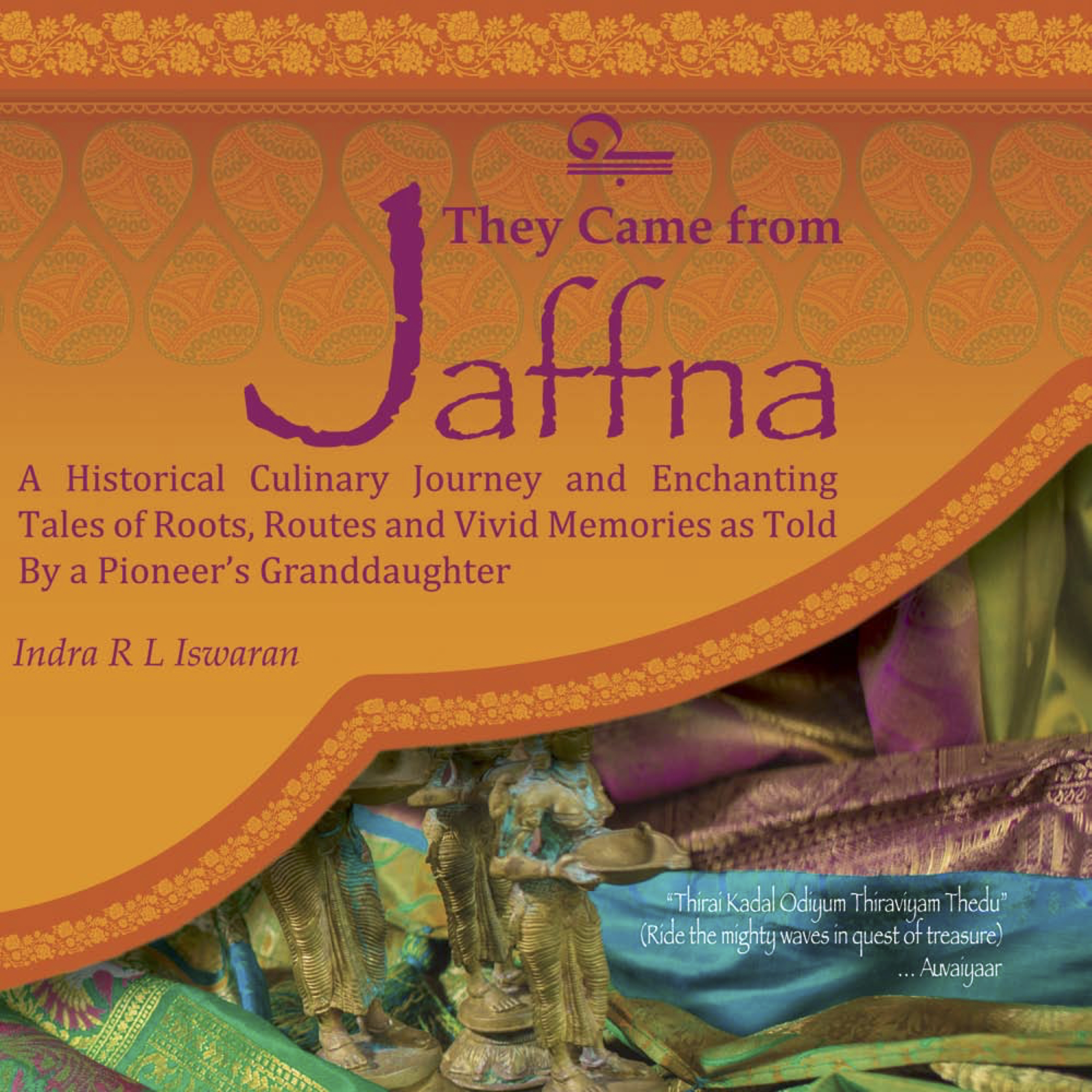 Reflecting on the present time, the Minister urged that Singapore must strive to be a place where talent and ideas congregate, remaining open to the world amid the changing economic and geopolitical landscape. 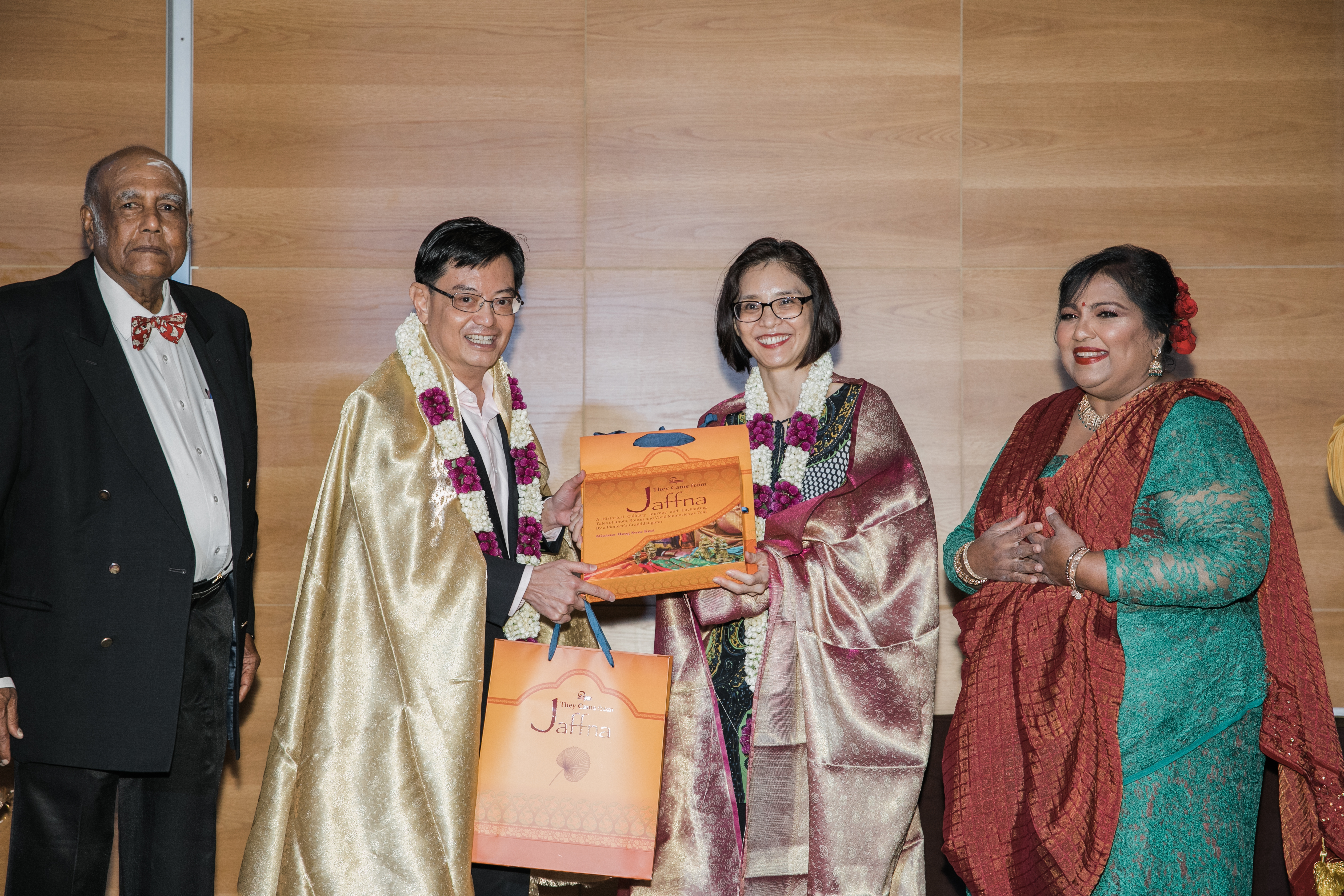 “No one group or country has all the ideas or expertise to tackle the many challenges that the world is facing. In a world that is rapidly changing and increasingly interconnected, we need to remain open and collaborate to achieve better outcomes together. For a city state like Singapore to thrive, businesses must continue to innovate and internationalise,” he said.

Urging young people to utilise the opportunities, the Minister said, “Young people must also be given opportunities to be global-ready, and must acquire a deep knowledge of Asia, for Singapore to truly benefit from Asia's growth as global economic weight is shifting towards the region.” 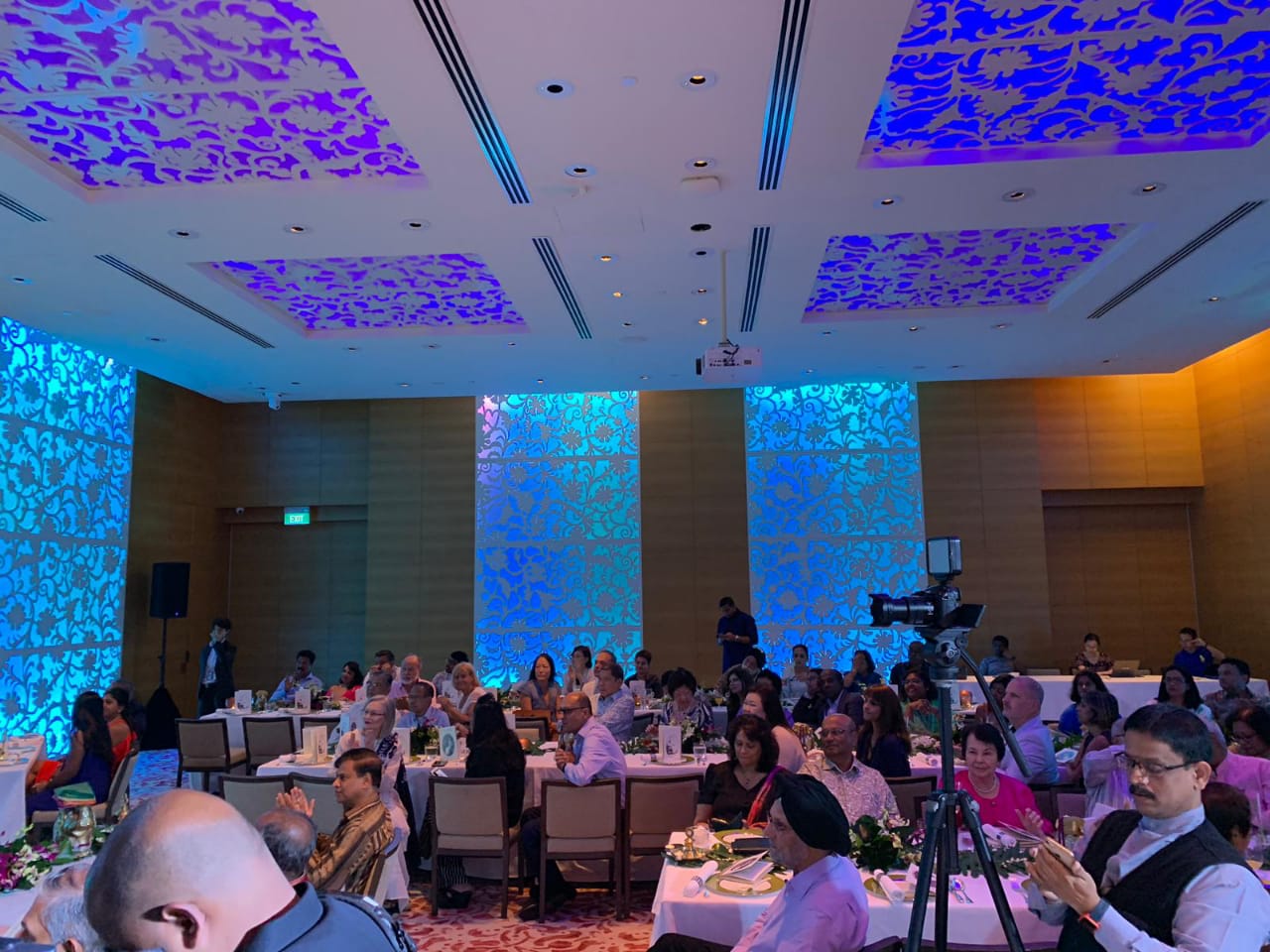 About 170 guests attended the book launch event which was organised at Grand Hyatt in Singapore. Photo: Connected to India

The Minister also spoke about the contributions of Ceylon Tamils in the development of Singapore. Heng said, “One of the nation's founding fathers S Rajaratnam, who drafted the National Pledge, was from the Ceylon Tamil community. And many educators, engineers, medical professionals, academics, legal professionals, senior public servants and members of the judiciary are of Ceylon Tamil heritage.” 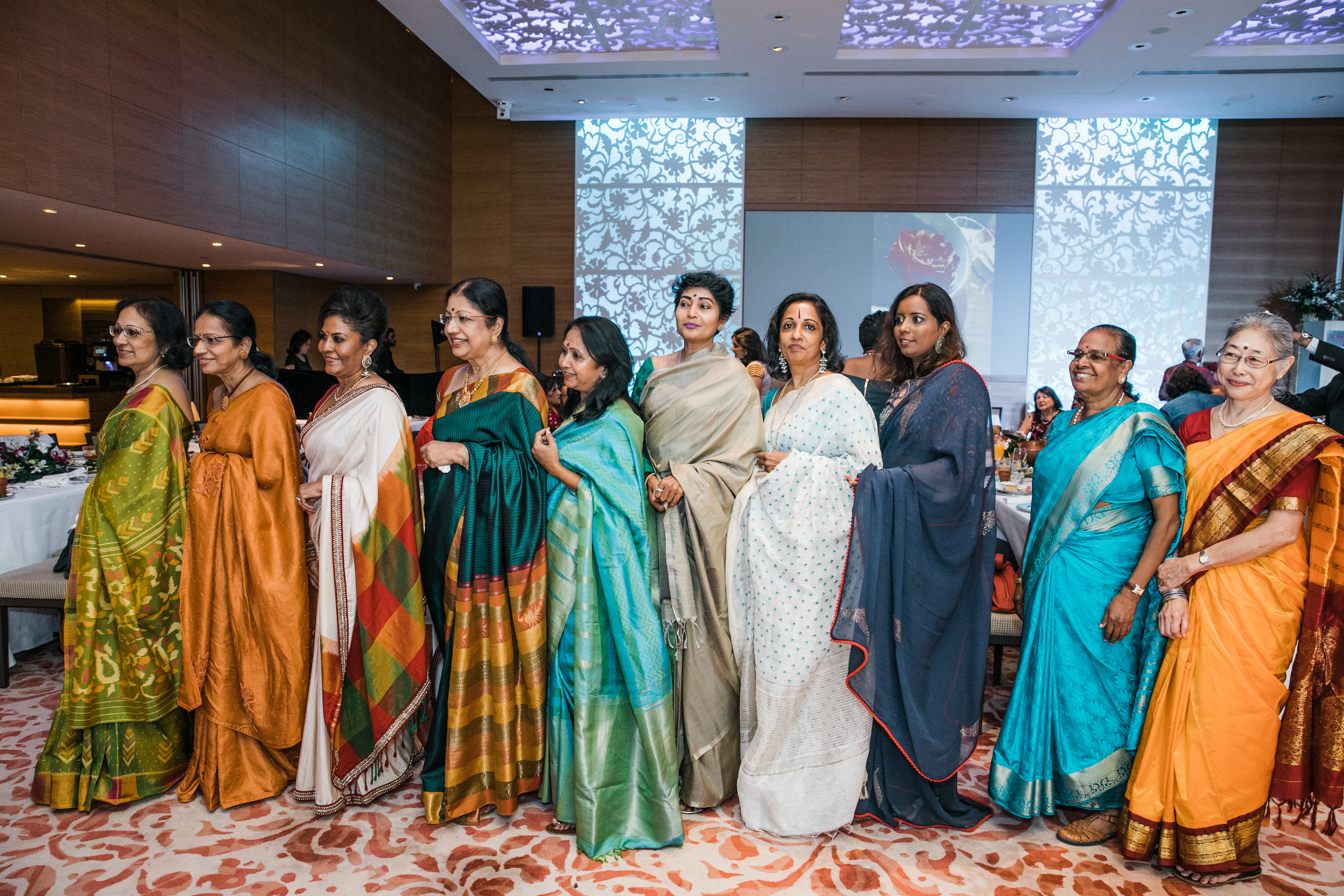 Heng also observed that it is fitting to launch the book during Singapore’s Bicentennial Year, which marks 200 years since Sir Stamford Raffles landed in Singapore. “As we commemorate our Bicentennial year, it is a good time for us to reflect on our rich history and learn from our past, so as to chart our future together," he said.

On a lighter note, a unique technique was utilised for launching the book. Finance Minister Heng Swee Keat sportingly beat a vessel which doubled up as a gong during the launch programme.

Indra R L Iswaran was thankful to the National Heritage Board in bringing out the book.

“I could not have been here without National Heritage Board, my family and the friends that surround me here and those that are far and wide and could not make here. I am also thankful to the expatriate community that moulded my life story and the great universe that surrounds me and channels me,” she said, adding that she was grateful for the chance to record and share her family's story. 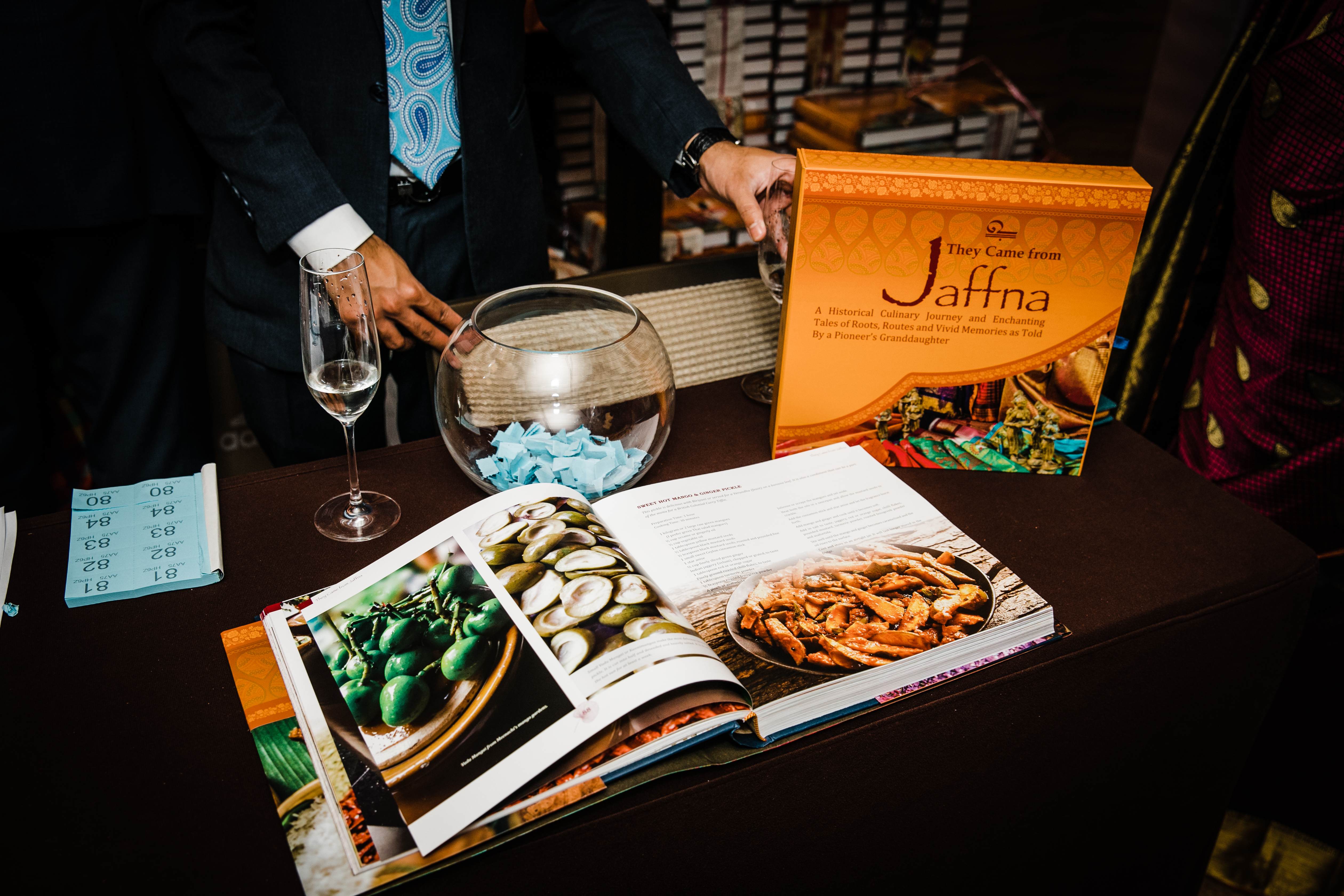 'They came from Jaffna' is 520 pages book with 309 recipes full of vibrant colour. It is a culinary journey from Jaffna that reaches out globally via the Spice Route. Singapore was a part of this for centuries. Photo courtesy: Mrs Indra Iswaran

“Each of us has a beautiful story to tell of the past. Do not be afraid of telling that story because it helps to conserve history for generations to come,” she said.