For Singapore, there is no better opportunity than India, says PM Modi

Indian Prime Minister Narendra Modi highlighted the close cultural, political and economic ties between India and Singapore and praised the Singapore Indian community on Day 1 of his three-day Singapore visit. 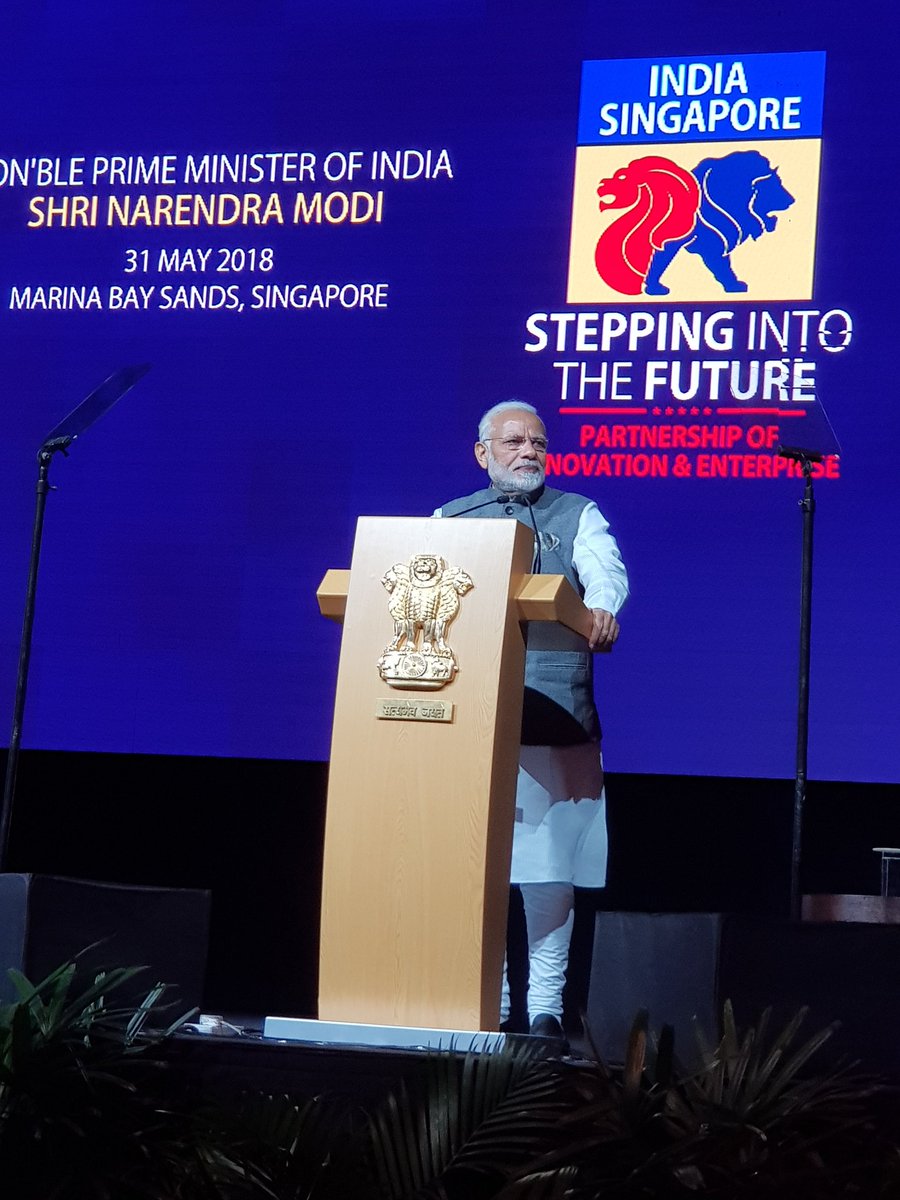 At a high-profile business and innovation interaction with the diaspora and entrepreneurs from India and Singapore, he addressed a gathering of 5,000 at the Marina Bay Sands Convention Centre before chairing a roundtable session with 30 of the Lion City's most prominent CEOs and business leaders.

"We have the world's most talented, dynamic, professional and committed Indian diaspora. Proud to be Singaporean and proud of their Indian heritage, ready to be the bridge between India and Singapore," the PM said in his speech.

"If you want to see all festivals of India in one city or celebrate them for weeks, Singapore is the place to visit," he added. 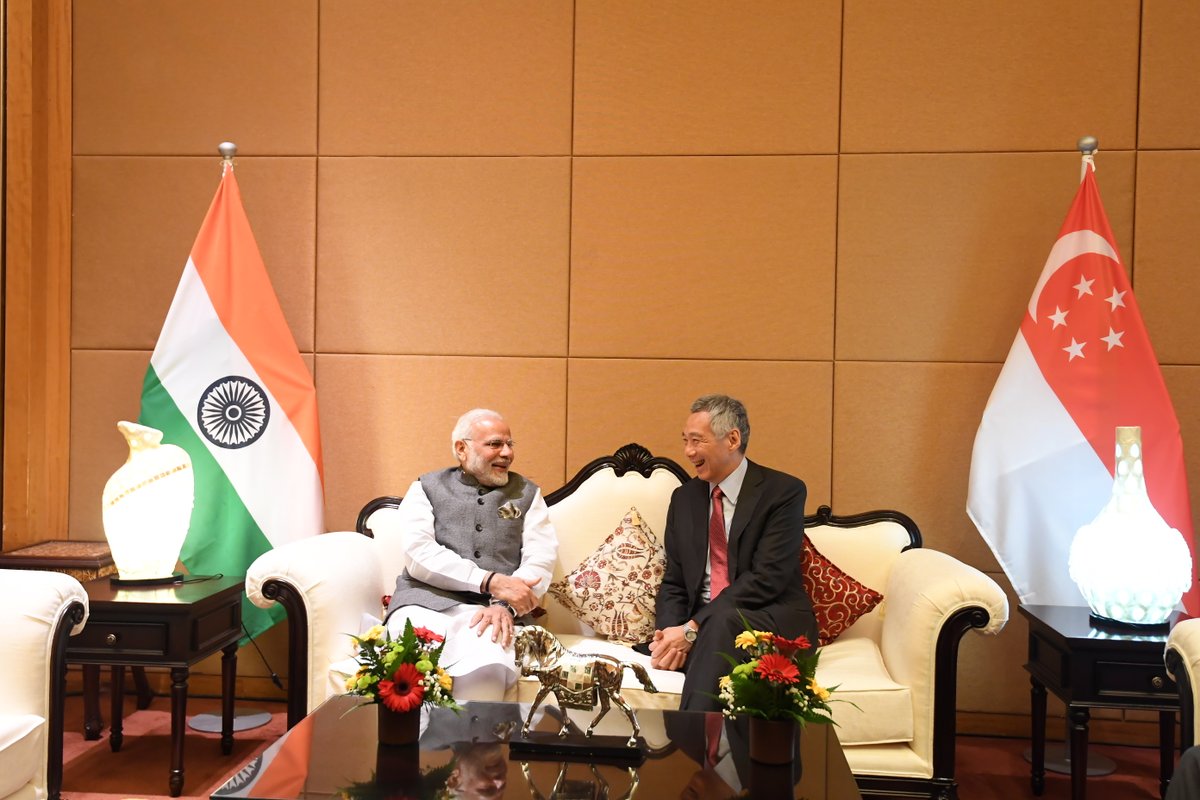 Indian PM Modi (left), seen here with his Singaporean counterpart Lee Hsien Loong, highlighted the historical ties with the island nation, stating that when India opened up to the world and turned to the East, Singapore became the bridge between India and ASEAN. Photo courtesy: PIB

He touched upon many issues critical to Singapore and India during the course of his speech. Highlighting the ties between the two nations, the PM said that political relations between India and Singapore are among the warmest and closest as the two share the same vision, leading to a natural partnership.

"For Singapore, there is no better opportunity than India. Few countries have so much in common and so much potential. We mirror each other in our societies and we wish the same for our region," the Indian PM said.

"When India opened up to the world and turned to the East, Singapore became the bridge between India and ASEAN," he stated, adding, "We will work for an open, international and stable trade regime, and our engagement towards the East will remain among our strongest and economics will remain an integral part of our Act East Policy. We will work most of all with ASEAN to reach a Regional Comprehensive Economic Partnership."

He went on to state that India and Singapore are contributing to each other's prosperity, and now are building new partnerships for the digital world. 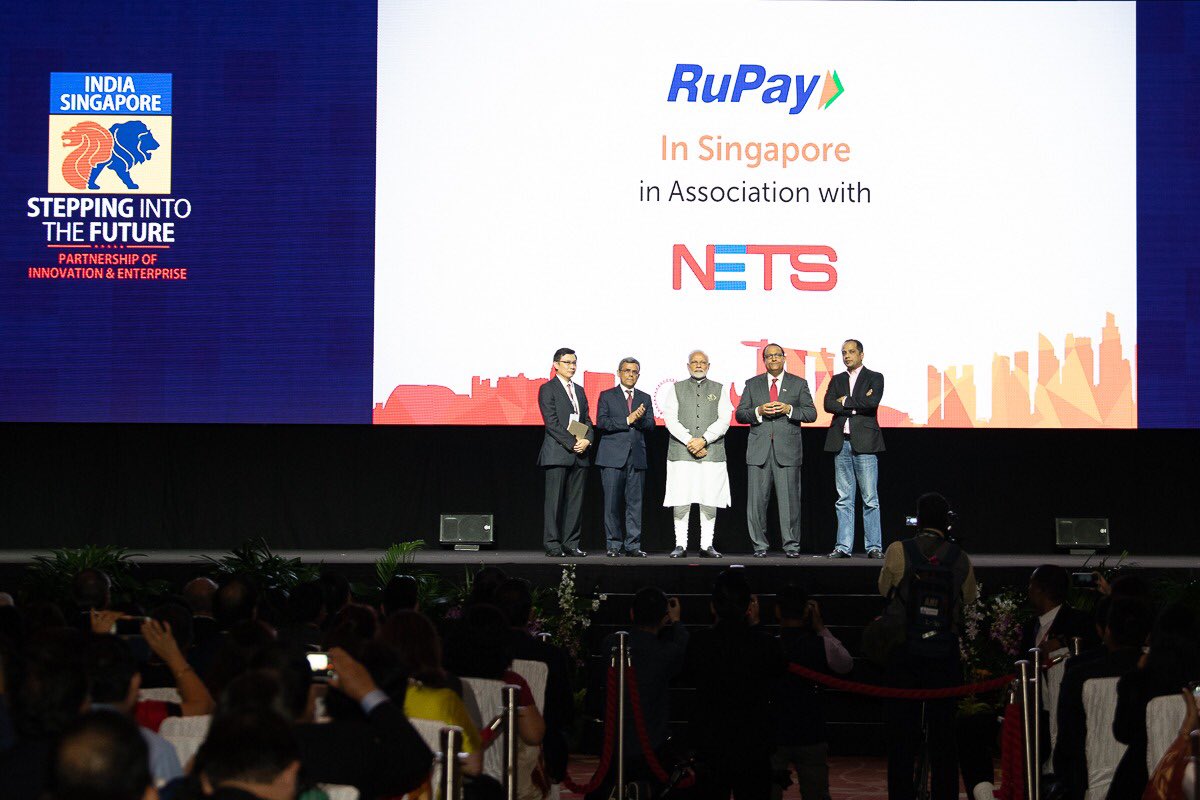 PM Modi launched three digital payment schemes onstage at the Marina Bay Sands Ballroom, including the international debut of Bharat Interface for Money (BHIM) and RuPay in Singapore as well as the State Bank of India's online international Rupee remittance app. The launch marks the collaboration of National Payments Corporation of India (NPCI) and Network for Electronic Transfers (NETS) of Singapore in launching a cross-border digital payment system between the two nations.

"RuPay, BHIM and UPI; it is natural for these to be launched in Singapore. Together, we can build a great economic partnership of the new age," Modi said.

Highlighting the deep historic ties that bind India and Singapore, Modi recounted the links various Indian leaders such as Swami Vivekanand and Netaji Subhash Chandra Bose had with Singapore. He also touched upon the scattering of Mahatma Gandhi's ashes at Clifford Pier in 1948 as an illustration of the close ties between the two nations.

"The moment underlines even today the timeless and universal values of Mahatma Gandhi," Modi said. He is set to unveil a plaque commemorating the event on Saturday.

PM Modi spoke at length about economic progress across multiple sectors in India, touching on advances in trade, railways, fintech, broadband outreach, digital services, startups and government schemes, among others. 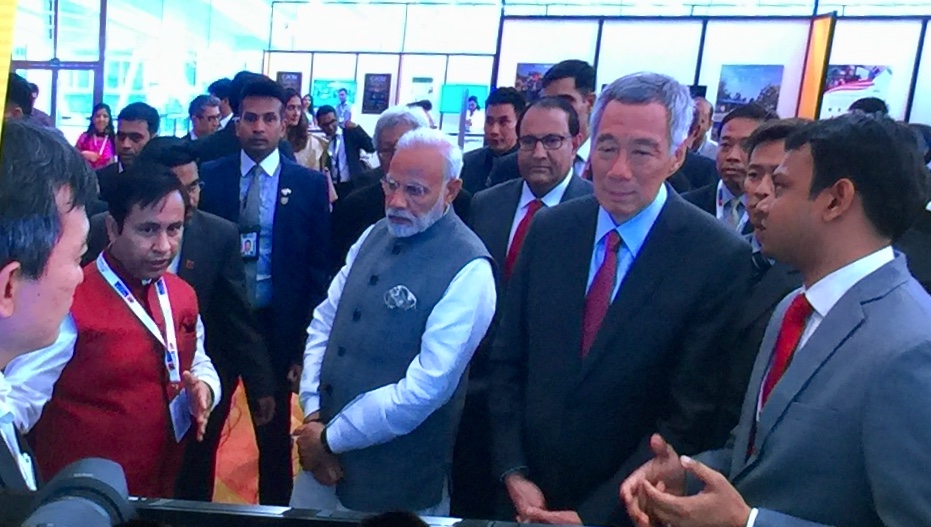 PM Modi (left) and Singapore PM Lee Hsien Loong interacting with innovators at an exhibition of 30 innovation and startup firms from India and Singapore. Photo: Connected to India

He highlighted development at the grassroots level, speaking about the micro-credit Micro Units Development & Refinance Agency (MUDRA) scheme, stating that over the past three years, loans worth more than USD 90 billion have been extended; 74 per cent of these loans have gone to women.

"We are building broadband connectivity to 250,000 village across India," he said.

He also reiterated the Indian government's commitment to overhaul and improve the nation's infrastructure using technology, laying emphasis on the education and agricultural sectors.

"The Indian startup sector is flourishing and is now the third largest in the world. We have opened over 200 tinkering labs across India to make our children innovators and job creators," the PM said.

Before the speech, PM Modi, along with Singapore Prime Minister Lee Hsien Loong, were shown around an exhibition of 30 innovation and startup firms from India and Singapore and interacted with the innovators. This exhibition was part of the day-long startup event InSpreneur 2.0 with over 500 participants focusing on frontier technologies of artificial intelligence, blockchain, data analytics, machine learning, fintech and cyber security along with innovation for social impact in areas of water, sanitation, health, education, smart cities and energy. 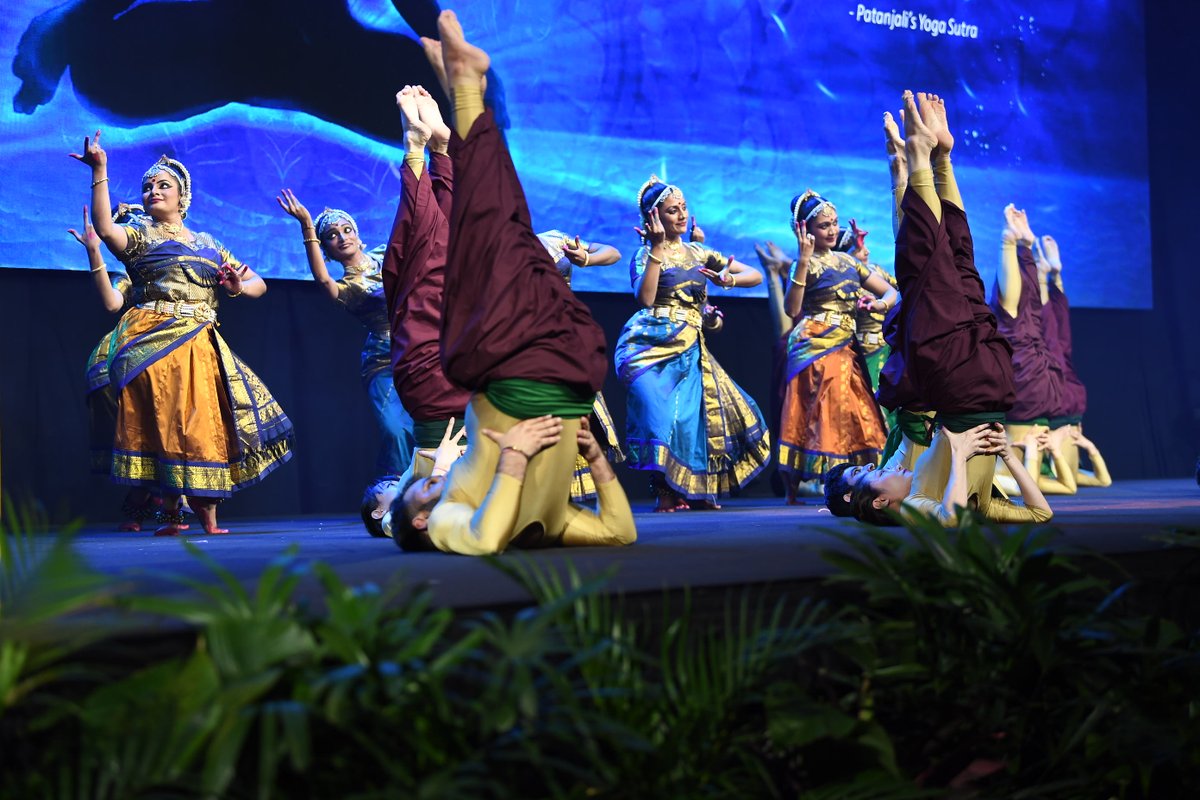 Anushasanam, a dance and yoga performance that depicted the benefits of practising the ancient art of Yoga, was the curtain-raiser for the event. Photo courtesy: PIB

The main event in the Marina Bay Sands Ballroom started with Anushasanam, a dance and yoga performance that depicted the benefits of practising the ancient art of Yoga for awakening energies that lie in the 7 Chakras of the human body. This was followed by the launch of the digital payments system partnership, followed by the announcement of multiple Memoranda of Understanding (MoUs) between businesses, universities, societies and government departments from India and Singapore.

"This evening has been lit up with your presence, energy, your talents and your achievements," Modi told the cheering crowd. "The city throbs with the finest Indian culture. This is as much due to the talented Indian community as the support from the Singapore government." 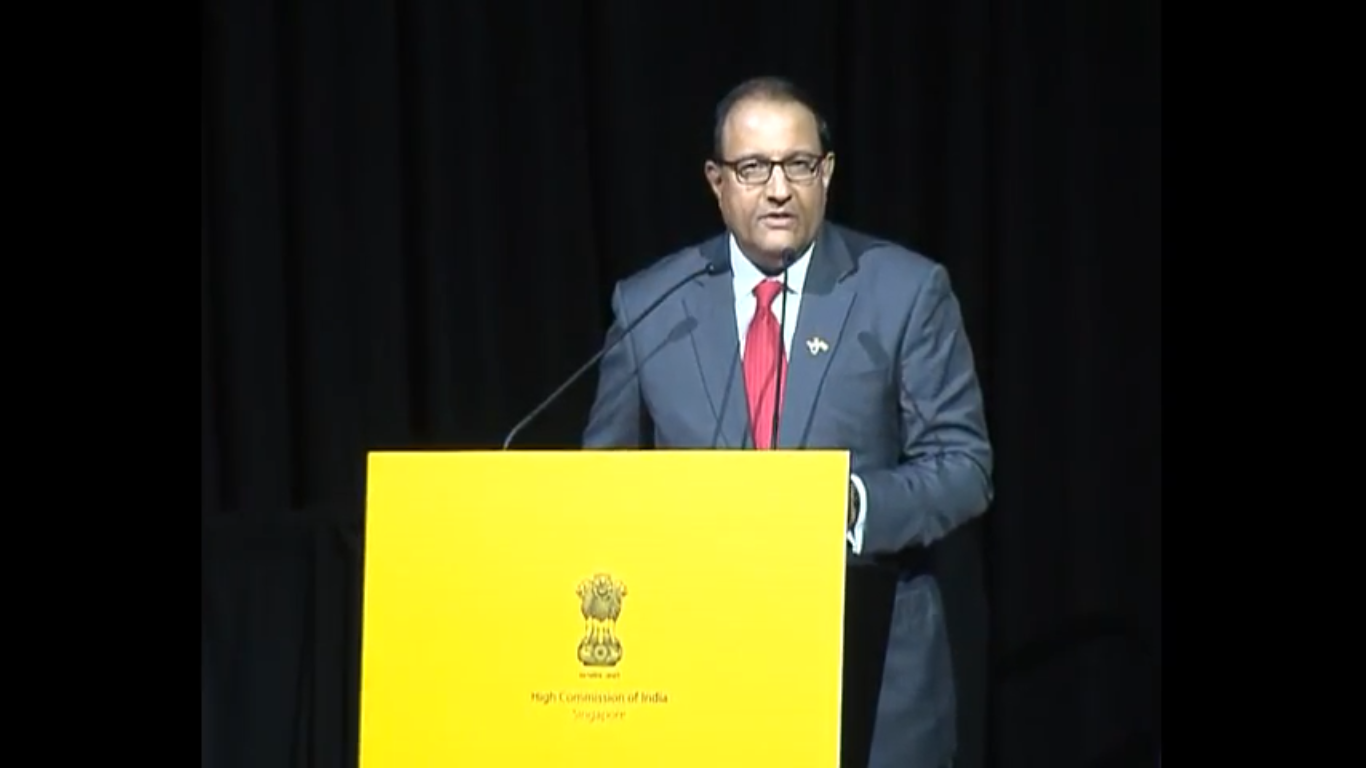 Iswaran announced that Indians would be able to use their RuPay cards to make payments using NETS terminals in Singapore.

"Against this backdrop of closer economic partnership and new areas of synergy, the prospects for our future collaboration are bright," he said.

PM Modi will meet his Singaporean counterpart Lee Hsien Loong tomorrow before delivering the keynote address at the Shangri-La Dialogue.