The Indian Enforcement Directorate has 'temporarily sealed' the premises of Young Indian (YIL) company within the National Herald office yesterday, putting forth instructions that the premises are not be opened without prior permission from the agency. 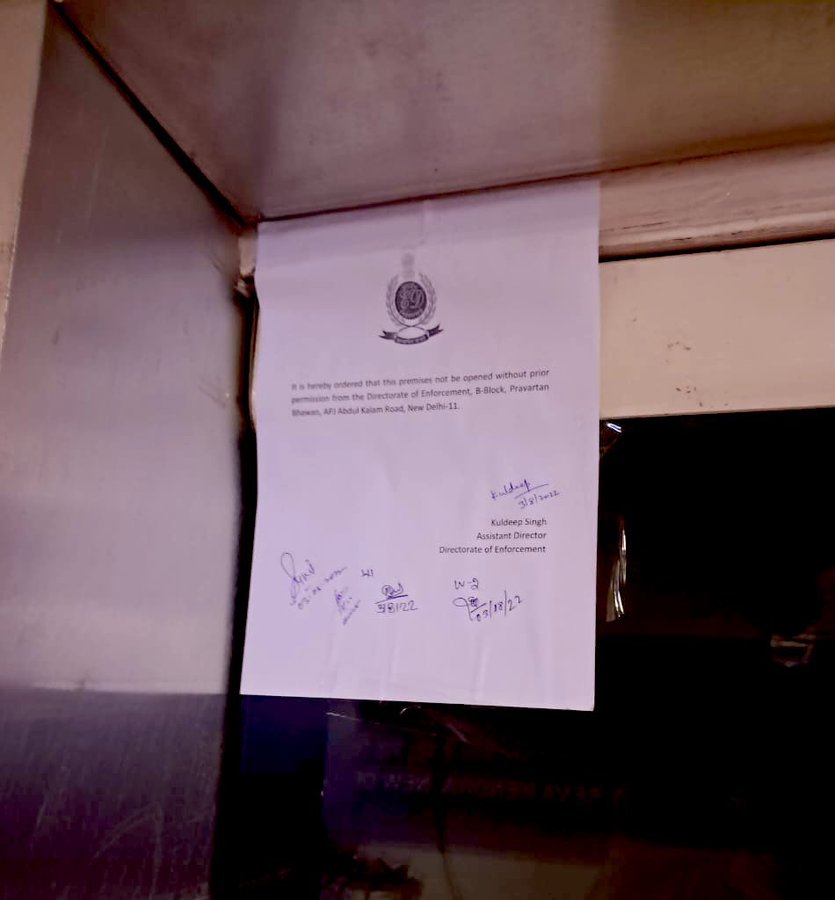 The office within the Herald House building in Delhi was sealed as there was no one available in the office during the search. Photo courtesy: Delhi Police

Additional police force have also been deployed outside the Congress headquarters in the national capital. Earlier on Tuesday, the ED had raided the publication's head office and 11 other locations as part of an ongoing money laundering investigation.

"It is hereby ordered that this premise not be opened without prior permission from the Directorate of Enforcement," the notice asserted. The office within the Herald House building in Delhi was sealed as there was no one available in the office during the search. As a result, officials were not able to complete the search. Earlier reports had indicated that it was the National Herald office that had been sealed, with a clarification being issued later.

According to officials, the searches at National Herald were carried out under the criminal sections of the Prevention of Money Laundering Act (PMLA) to "gather additional evidence with regard to the trail of funds and they are against those entities who were involved in the National Herald-linked transactions".

The Congress has accused the BJP-led administration of indulging in 'vendetta politics' - an allegation that has since been dismissed Central government leaders. The Lok Sabha had been adjourned on Wednesday afternoon amid opposition protests over the raids.

"Delhi Police blocking the road to AICC Headquarters has become a norm rather than an exception! Why have they just done so is mysterious," tweeted Congress MP Jairam Ramesh, sharing a video of the police-barricaded road.

A day earlier the senior politician had dubbed the raids 'a part of the continued attack' against India's principal opposition. "We strongly condemn this vendetta politics against those who speak up against the Modi Govt. You cannot silence us!" the Congress general secretary had said.

Senior leader Mallikarjun Kharge also dubbed it "politics of vendetta" and alleged that the BJP wished to suppress the voice of Congress and create an atmosphere of fear to demoralise party workers. "'The BJP's interest is that they want to kill democracy and are destroying many state governments by purchasing the MLAs," he said, adding "this is very bad for the democracy".