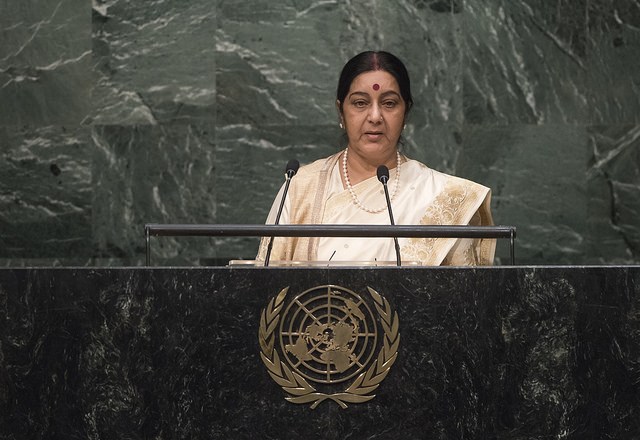 Indian External Affairs Minister (EAM) Sushma Swaraj said yesterday that India had decided to issue a visa to an ailing Pakistan Occupied Kashmir (PoK) resident, even though he did not have a letter from Pakistan’s Foreign Adviser Sartaj Aziz, because the government considered PoK to be an integral part of India. The government has waived the condition for residents of PoK.

POK is an integral part of India. Pakistan has illegally occupied it. We are giving him visa. No letter required. https://t.co/cErxQw7Cht

Osama Ali, a 24-year old resident of Rawalkot, has been diagnosed with a tumour in his liver, for which his family has sought treatment in Delhi. "PoK is an integral part of India. Pakistan has illegally occupied it. We are giving him visa. No letter required," Swaraj tweeted.

On the question of why a visa was necessary, Swaraj had said that "as PoK was under illegal occupation of Pakistan. So citizens have Pakistani passports".

POK is under illegal occupation of Pakistan. So citizens have Pakistani passports. Therefore, Indian visa is required.

She also expressed dismay over the lack of courtesy shown by her Pakistani counterpart, who she said had not even acknowledged her personal letter requesting for a Pakistani visa for Kulbhushan Jadhav’s mother Avantika Jadhav.

“I wrote a personal letter to Mr Sartaj Aziz for the grant of her visa to Pakistan. However, Mr Aziz has not shown the courtesy even to acknowledge my letter,” she had tweeted.