Despite a day full of delays, filibustering and political controversy, Pakistan Prime Minister Imran Khan became the nation's first premier to be removed through a no-trust vote today. 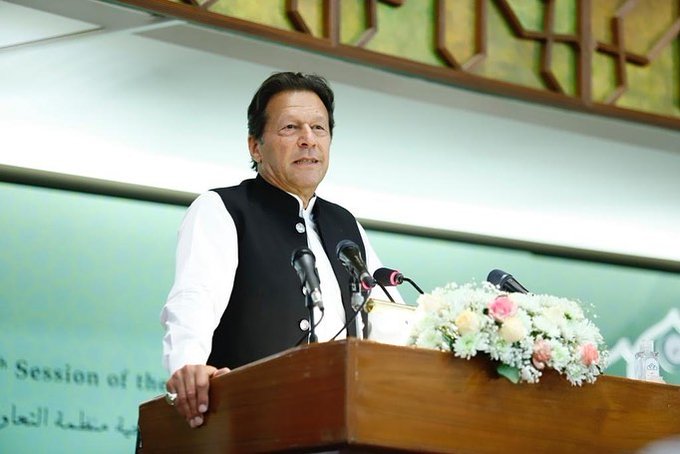 Earlier yesterday, Khan said that he would not recognise an opposition government if it succeeded in an attempt to oust him. Photo courtesy: Twitter/@ians_india

In a midnight vote, 176 members of Pakistan's National Assembly voted in favour of the no-confidence motion in the absence of government members, with reports emerging that rebel PTI members also abstained from voting to avoid being disqualified under Pakistan's anti-defection law. The final count was 174 members voting in favour of the motion.

Khan's Pakistan Tehreek-e-Insaf (PTI) party effectively lost the majority in the assembly earlier this month when a key coalition partner said its seven lawmakers would vote with the opposition. More than a dozen lawmakers from the ruling party also indicated that they would cross the floor.

Once the House convened yesterday at 10 am, National Assembly Speaker Asad Qaiser called for a discussion of an infamous letter allegedly written by a US official urging a regime change in Pakistan, which PM Khan had publicised in a rally earlier in the week.

After a day of delays on the part of Khan's PTI and with the Pakistan Supreme Court's midnight deadline looming, Speaker Qaiser announced his resignation and handed over the chair to  Ayaz Sadiq who had been elected as Speaker by the combined opposition last Sunday in an informal sitting following Khan's attempt to quash the no-confidence motion and dissolve the Assembly. Sadiq, who had served as Assembly Speaker in 2018, initiated the No Confidence motion proceedings.

Apart from a brief adjournment at the stroke of midnight, the vote proceeded without a hitch with only a few PTI members of the assembly present. Most of Khan's supporters and PTI Assembly members protested outside the building while voting was underway.

According to unconfirmed sources, Pakistan Muslim League-Nawa (PML (N)) leader Shehbaz Sharifaz Sharif, who had proposed the motion, is likely to be elected as the new Prime Minister when the session is continued at 2 pm today.

The motion was tabled after a five-member bench headed by Pakistan Chief Justice Umar Ata Bandial earlier in the week unanimously struck down the deputy speaker's ruling on the rejection of the no-confidence motion against Khan and ordered the restoration of the National Assembly, saying that the prime minister's move to dissolve Parliament and call early elections was "unconstitutional".

Earlier yesterday, Khan said that he would not recognise an opposition government if it succeeded in an attempt to oust him.

"I will not accept an imported government," the 69-year-old said in a late-night address, suggesting the move to oust him was part of a foreign conspiracy and calling for peaceful protests.

The opposition parties need 172 members in the 342-member house to orchestrate the downfall of Prime Minister Khan and already they showed the support of more than the needed strength.