The Singapore International Arbitration Centre (SIAC) appoints Davinder Singh as the new chairman of its board of directors with effect from December 16. 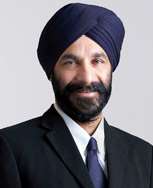 Singh, chief executive of Drew & Napier LLC - one of the Big Four law firms in Singapore, takes over from Lucien Wong.

The move follows Wong's recent appointment as the next Attorney-General of Singapore, said SIAC in a statement on Thursday.

Describing the appointment as "an honour and privilege," he said Lucien Wong "leaves a hugely impressive legacy, having achieved so much for SIAC." He further added that he is looking forward to working closely with Gary Born, president of the SIAC Court of Arbitration.

Wong said he has "every confidence that Davinder Singh will steer SIAC to even greater heights."

Singh is widely recognised as a leading disputes practitioner. He was in the first batch of Senior Counsel appointed in Singapore. Apart from being a top litigator, he has an active international arbitration practice involving complex commercial disputes and multiple jurisdictions.

His credentials include being the only Singapore lawyer to win the Outstanding Contribution to the Legal Profession Award at the Chambers Asia-Pacific Awards 2014.