Over 50,000 people are expected to attend the rally hosting Indian Prime Minister Narendra Modi at the NRG Football Stadium in Houston, Texas on Sunday. 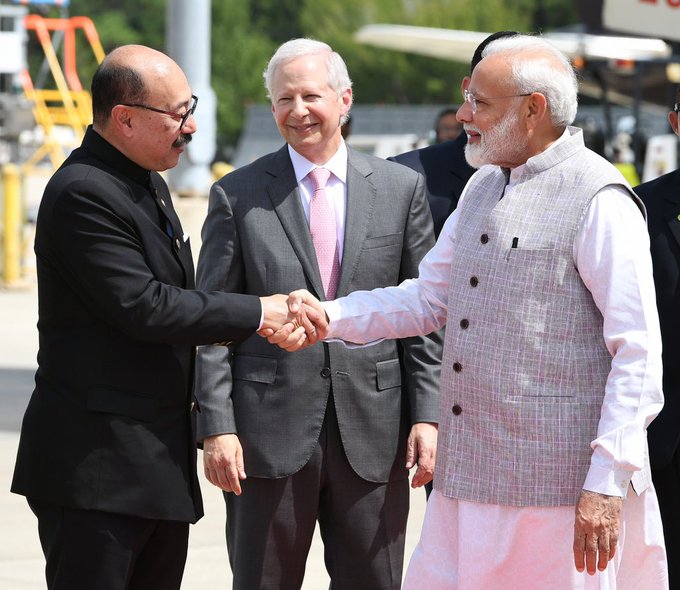 PM Modi arrived in Houston on Saturday and held several meetings prior to the rally tonight. Photo courtesy: Twitter/@narendramodi

The much-hyped 'Howdy, Modi!' event will see thousands of members of the Indian-American community interact with the PM, whose actions in converting the diaspora into an effective tool of India’s foreign policy have paid off over the past six years.

Preparations are in full swing in Houston for the historic #HowdyModi event.

NRG stadium is getting ready to welcome popular leader of world's biggest democracy to address an historic crowd.

This event to see world's 2 most powerful leaders on one stage! pic.twitter.com/anmyTcyfpY

US President Donald Trump is expected to deliver a major, 30-minute speech on India and Indian-Americans at the event in the world's energy capital. Contrary to what was reported earlier, Trump, the 45th President of the United States, is no longer making a guest appearance or making a notional brief remark at the diaspora event but instead will give a full speech.

It is impossible to come to Houston and not talk energy!

Had a wonderful interaction with leading energy sector CEOs. We discussed methods to harness opportunities in the energy sector.

Also witnessed the signing of MoU between Tellurian and Petronet LNG. pic.twitter.com/COEGYupCEt

Modi touched down in Houston on Saturday and hours after his arrival, met leaders of the energy sector in the US with a focus on working together for energy security and expanding mutual investment opportunities between India and the United States. He also met members of the Sikh community and a delegation of Kashmiri Pandits, who voiced support for the “steps being taken” in India and Kashmir.

I had an excellent interaction with the Sikh Community in Houston. I am delighted to see their passion towards India’s development! pic.twitter.com/uvvaDtnvAY

I had a special interaction with Kashmiri Pandits in Houston. pic.twitter.com/07coxdg0oS

Sunday's event at the sprawling NRG Football Stadium is the largest gathering ever for an elected foreign leader visiting the US, other than the Pope. The event will begin at 8:30 pm (Indian Standard Time) and continue until 11:30 pm.