Kicking off a two-day summit in New Delhi, Amazon Inc founder Jeff Bezos on Wednesday said his company will use its global footprint to export USD 10 billion worth of Make in India goods by 2025.

In a chat with Amazon India country head Amit Agarwal on the first day of Smbhav, a summit for small and medium enterprises (SMEs), Bezos said the global online retailer will invest USD 1 billion in digitising India’s small and medium businesses. 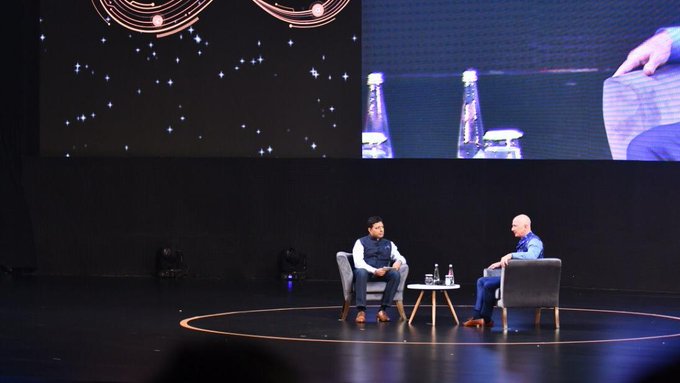 "I predict that 21st century is going to be the Indian century," said Jeff BEzos in a fireside chat with Amazon India country head Amit Agarwal. Photo courtesy: Twitter/@AmazonNews_IN

"We are doing this now because it is working. And when something works you should double down on it," he said.

Even as the announcement was made, the Confederation of Indian Traders (CAIT) staged a protest at Jantar Mantar against the retailer. SMEs have accused the company of unfair trade practices, including the use of deep discounts and giving preference to select sellers to capture markets.

The Competition Commission of India (CCI) has ordered a probe into alleged competition law violations by Amazon and Walmart-owned Flipkart over the allegations as well.

In all, 500,000 traders are expected to hold protests in over 300 locations in India on Wednesday, the CAIT said.

"I predict that 21st century is going to be the Indian century," he said, adding that apart from the dynamism it has, India is a democracy which is a major characteristic of the country.

Earlier in the day, Bezos joined a group of children for a kite-flying session and posted it on Instagram.

Any day is a good day when you get to fly a kite. #ThankYouIndia

"Any day is a good day when you get to fly a kite," wrote the Amazon CEO, with the hashtag #thankyou India.

Just landed in India and spent a beautiful afternoon paying my respects to someone who truly changed the world. “Live as if you were to die tomorrow. Learn as if you were to live forever." - Mahatma Gandhi. pic.twitter.com/xDXAT9cBgf

He landed in India on Tuesday for a three-day visit and paid tribute to Mahatma Gandhi at the Gandhi Smriti.  His itinerary includes meetings with policymakers and corporates on the sidelines of the Smbhav summit and a fireside chat with key Bollywood celebrities to discuss the future of entertainment on Thursday evening in Mumbai at a mega Amazon Prime Video event.