The results for the five state Assembly Elections 2017 are in and the BJP has emerged as the biggest winner, set to form governments in three of the five states. With overwhelming majorities in Uttar Pradesh and Uttarakhand, India’s ruling party has shown that it has the mandate of the people behind it. 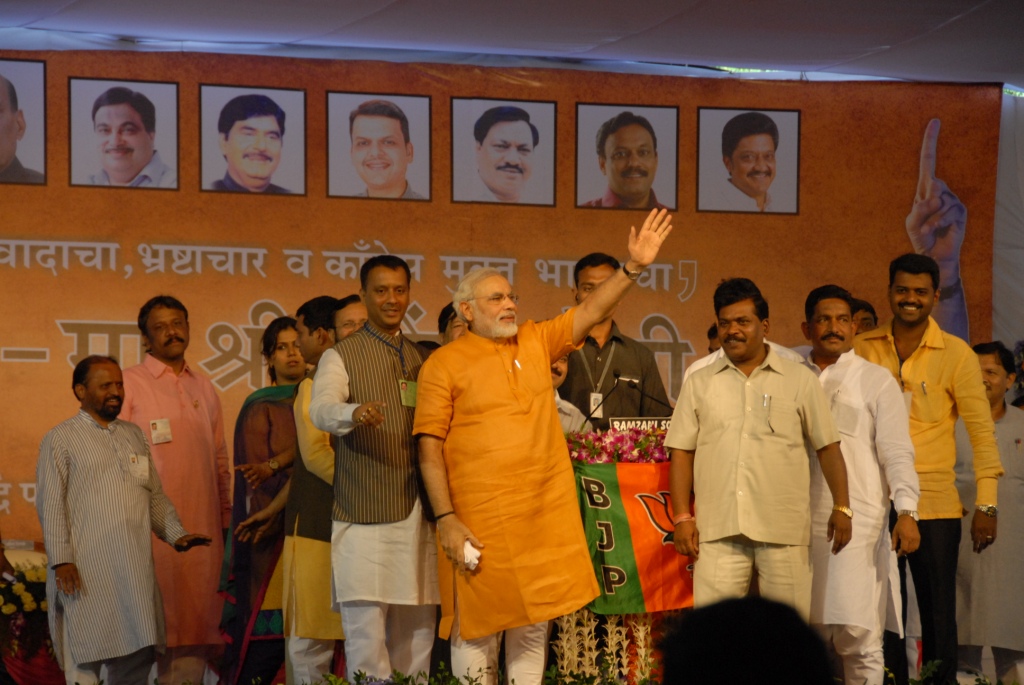 In the run-up to the elections, there were concerns that the demonetisation factor would work against the BJP, and that an alliance of the SP and Congress might prove the deciding factor in India’s largest state. However, as the post-poll activities in the states showed, these fears proved unfounded.

The Bharatiya Janata Party (BJP) won a sweeping victory with 312 seats in the bag. The incumbent Samajwadi Party (SP) could only manage to win 47 seats while the Bahujan Samaj Party (BSP) secured 19 seats. The Indian National Congress (INC) were a distant fifth with only seven seats, which spells trouble for their comeback hopes. 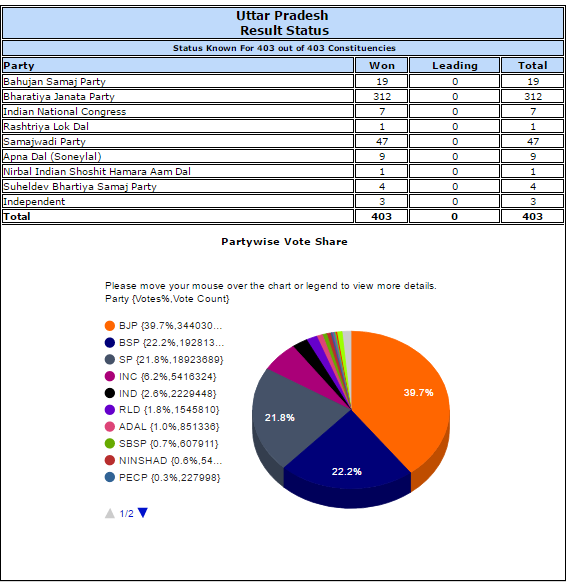 The Indian-American supporters of Prime Minister Narendra Modi held celebrations across the US after the results and attributed the win to the party's development plank. Celebrations were held from Silicon Valley on the west coast to New York and Washington, DC.

The emphatic victory for the BJP, which is the ruling party at the Centre, came as a surprise to poll pundits who were expecting the SP and Congress to pose more of a challenge, especially since the two had formed a pre-poll alliance. Historically, it is the first time the BJP have come to power in 15 years. Their last regime was as part of a coalition with the BSP in the 1997-2002 term.

The party’s victory has been attributed in large part to sound tactical decisions by Amit Shah, national president of the BJP, and a late round of campaigning by Narendra Modi, the Indian Prime Minister. Whatever the reason, the massive victory in the state has made the BJP’s path to re-election in 2019 a lot smoother.

The anti-incumbency wave hit with a vengeance in Punjab, with the ruling Shiromani Akali Dal (SAD) and BJP combine losing power as predicted. The SAD managed to secure 15 seats, which was more than experts expected, while the BJP won only three seats. The biggest winner of the election was the Congress, who won in 77 seats, one short of a two-thirds majority in the House. 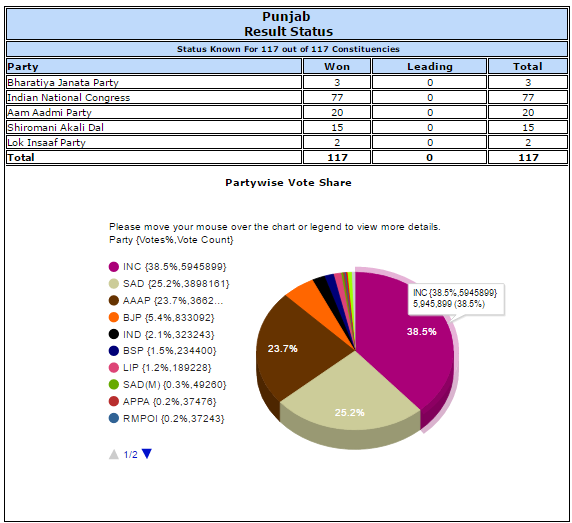 The biggest disappointment was for the anti-corruption Aam Aadmi Party (AAP), whose only four Lok Sabha seats in the 2014 elections were from Punjab. High-profile campaigning and heavy investment from NRIs seems to have worked against the AAP, which could only manage a paltry 20 seats of the 40-44 it was slated to win. The party even placed third in terms of vote share.

The Congress, led by veteran politician Captain Amarinder Singh, played the local vs outsiders card. In fact, Amarinder was touted by experts as the single biggest reason for the huge victory as his efforts energised the party at a time when his rivals in the SAD were mired in scandal and tensions with alliance partner BJP.

The BJP decimated the ruling Congress, winning 57 seats to the latter’s 11. There were many indications of such a result, with the Congress Chief Minister of the state Harish Rawat sitting on a shaky house of cards. 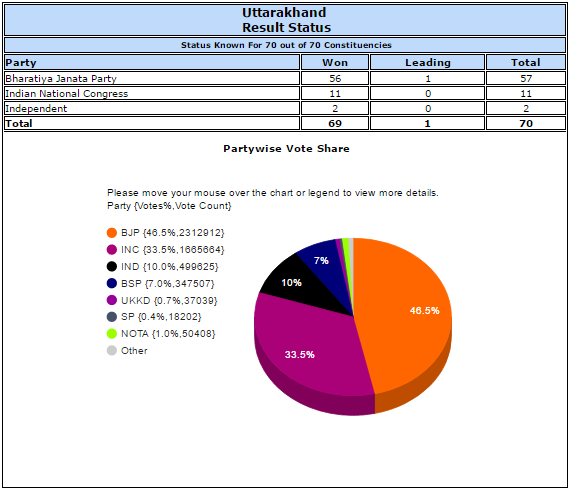 He faced three rebellions and crises during his term, the latest a protest by 10 of his own party’s House members last March. Rawat was accused of autocratic actions and a failure to consider the opinions and arguments of others in the party. It came as no surprise that he failed to win the elections from both seats he contested this time around.

The doubts in the state have cleared up, with the BJP under former footballer N biren Singh forming the new government. The Congress, despite being the largest single party with 28 seats, three short of the required majority, found themselves abandoned by all potential allies. 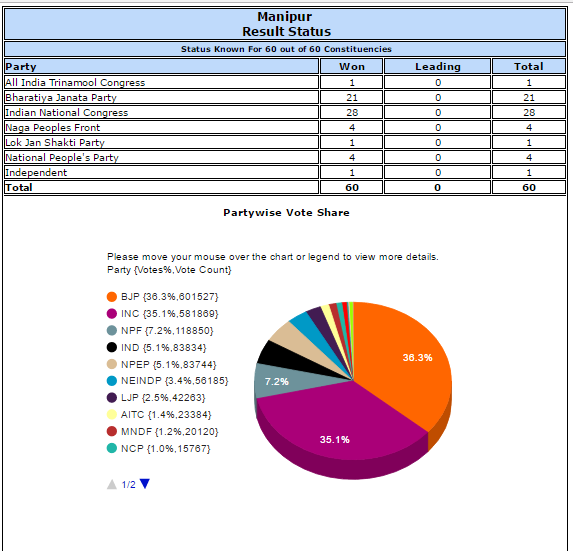 The BJP, with 21 seats cobbled together support from the regional parties and had said that one of the Congress members is ready to switch parties, which would disqualify him from his seat in the House. The proceedings in the state were being followed by interest by pundits as it has been a traditional Congress bastion.

Again, the BJP was in second place, winning only 13 seats to the Congress’ 17. With some hasty networking by Parrikar, however, the independents and smaller parties have agreed to support the incumbent party. The support of the Goa Forward party for the incumbents, which won three seats on an anti-BJP plank, has caused a furore. 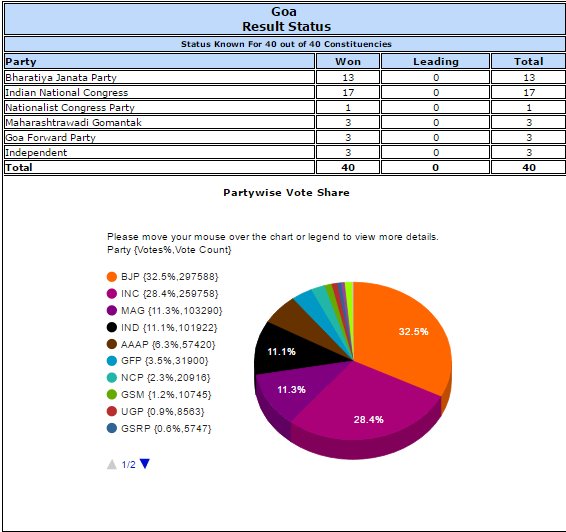 Despite a rocky term, the BJP led by Manohar Parrikar formed the government with 22 seats in hand. The BJP highlighted their desire for power by allowing Parrikar, the Indian Union Defence Minister, to resign and take up the reins as Goa Chief Minister.

The aftermath of the elections has shown almost as clearly as the results themselves that the BJP tide is on the rise in India. Despite Punjab going against the flow, the fact that the BJP has staked its claim to form the governments in states where it did not win the most number of seats is the clearest indicator of the party’s confidence as well as a gauge of the regional parties’ opinion.