Asia must feel from within that the next century belongs to them: PM Modi at NTU Singapore

“We must balance tradition and innovation, and think of furthering connectivity without any conflict,” said Indian Prime Minister Narendra Modi addressing the students in a visit to the Nanyang Technological University (NTU) today.

His overarching message, however, was for the entire Asian continent when he said, "Asia must feel from within that the next century belongs to them." 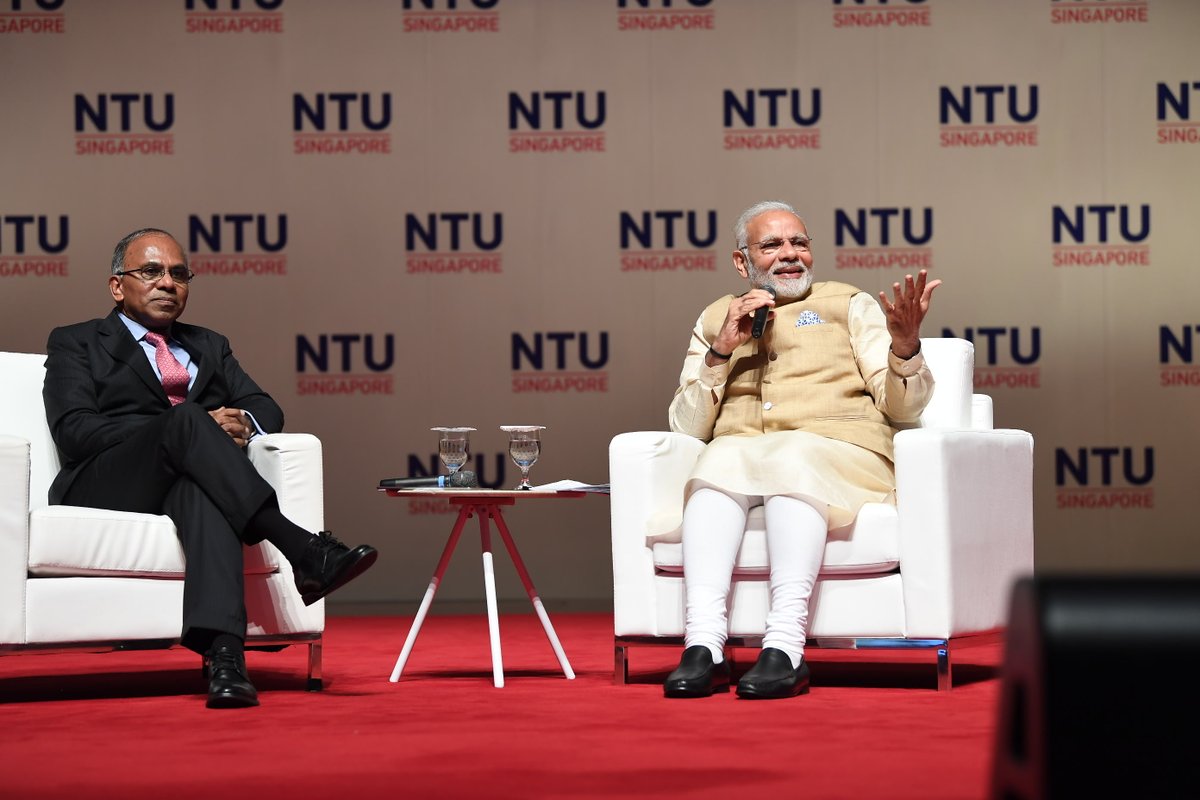 The key theme of PM Modi’s address was that of encouraging innovation and pushing the boundaries of technology. Photo courtesy: PIB

PM Modi participated in a dialogue titled 'Transforming Asia through Innovation' with NTU president Professor Subra Suresh and also interacted with the students. He also visited an exhibition organised at NTU and interacted with a social robot.

Modi was accompanied by Singapore's Education Minister Ong Ye Kung. He is set to later deliver the keynote address at the 18th Shangri-La Dialogue in Singapore.

During his visit to the university, six agreements were signed to strengthen academic and industry partnerships between NTU and leading Indian universities and institutions. Among them was an agreement between NTU and the Indian Institute of Space Science and Technology, Thiruvananthapuram, which prompted students to ask the PM about India’s space programme and its utility. 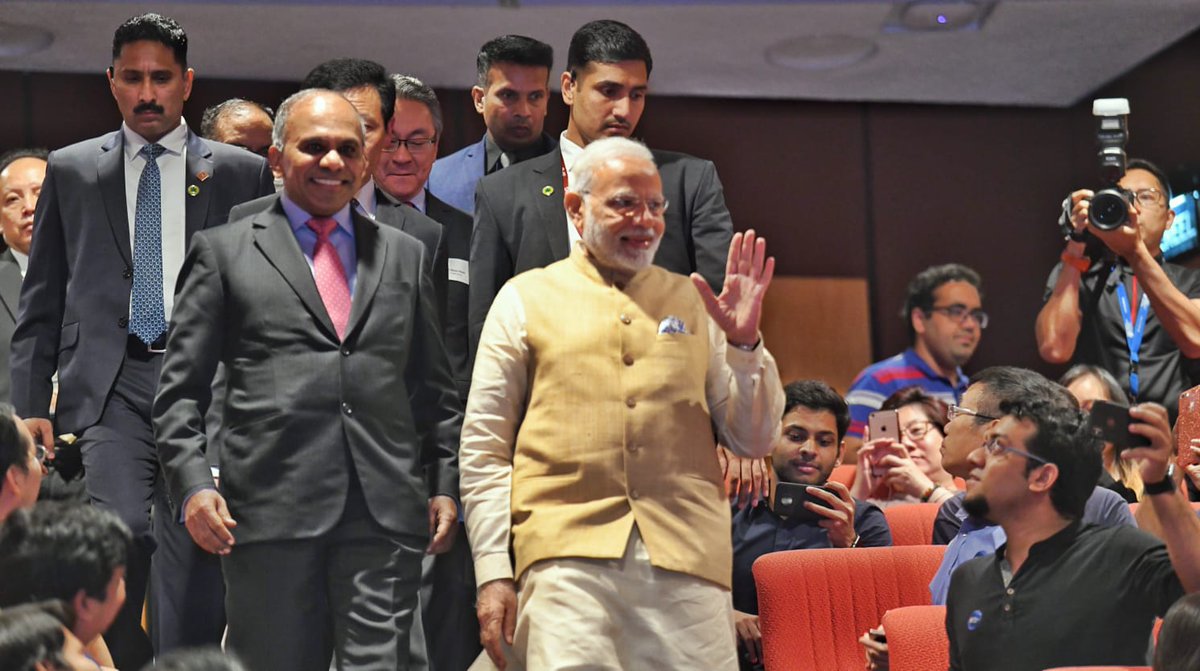 Other agreements included a statement of intent between NTU and NITI Aayog, the leading policy think tank in India, and a pact where NTU will create the Gopalakrishnan-NTU Presidential Postdoctoral Fellowships to enable some of the world's best young scientists to build a research career at NTU.

"In our knowledge-based economy, Singapore and India rely on the free flow of talent and ideas into their countries and through their universities," said Professor Suresh.

The key theme of PM Modi’s address was that of encouraging innovation and pushing the boundaries of technology to ensure greater progress.

“Technology is what empowers people. A technology-driven society breaks social barriers,” he said, adding that disruptive factors were positives in this case. 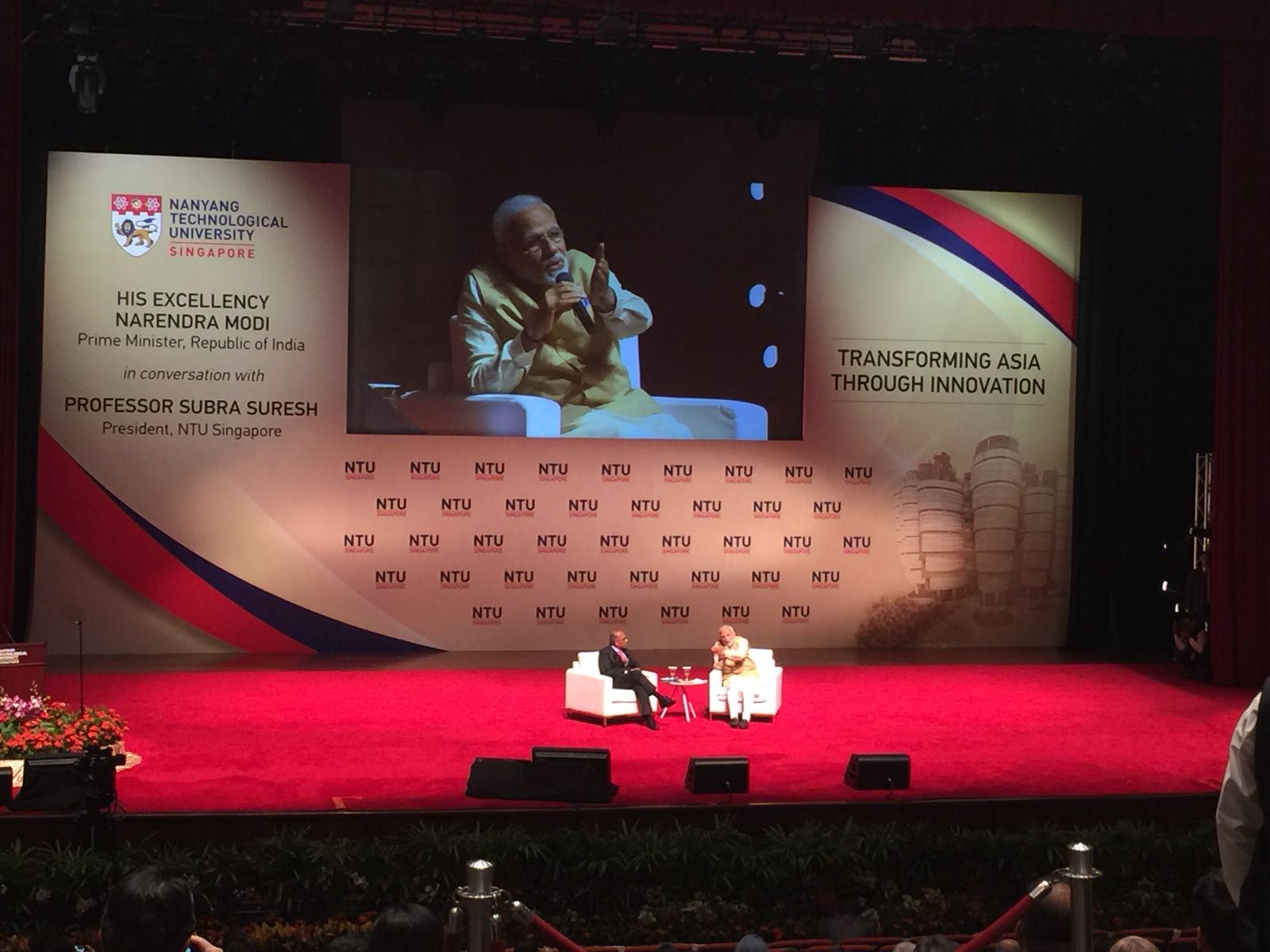 "We should not see disruption as destruction. People were apprehensive about computers but see how computers changed human history," said PM Modi. Photo: Connected to India

“Disruption gives rise to new ideas and make the human brain exercise. It churns out the creative best. We should not see disruption as destruction. People were apprehensive about computers but see how computers changed human history,” Modi said in his address.

A gift of SGD4 million by Kris Gopalakrishnan, Chairman of Axilor Ventures and co-founder and former CEO of Indian IT giant Infosys, was also announced today to support postdoctoral and student research activities at NTU. 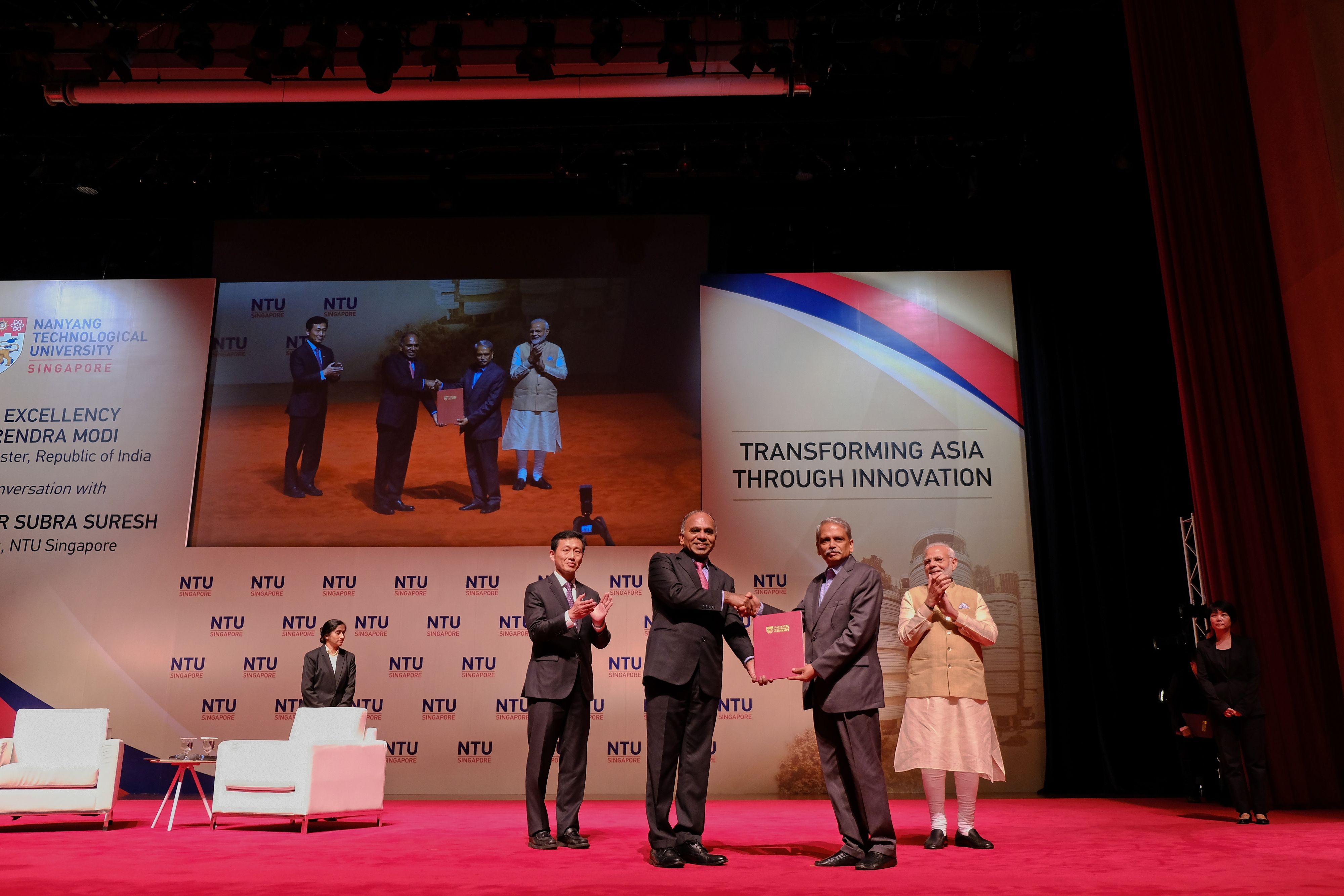 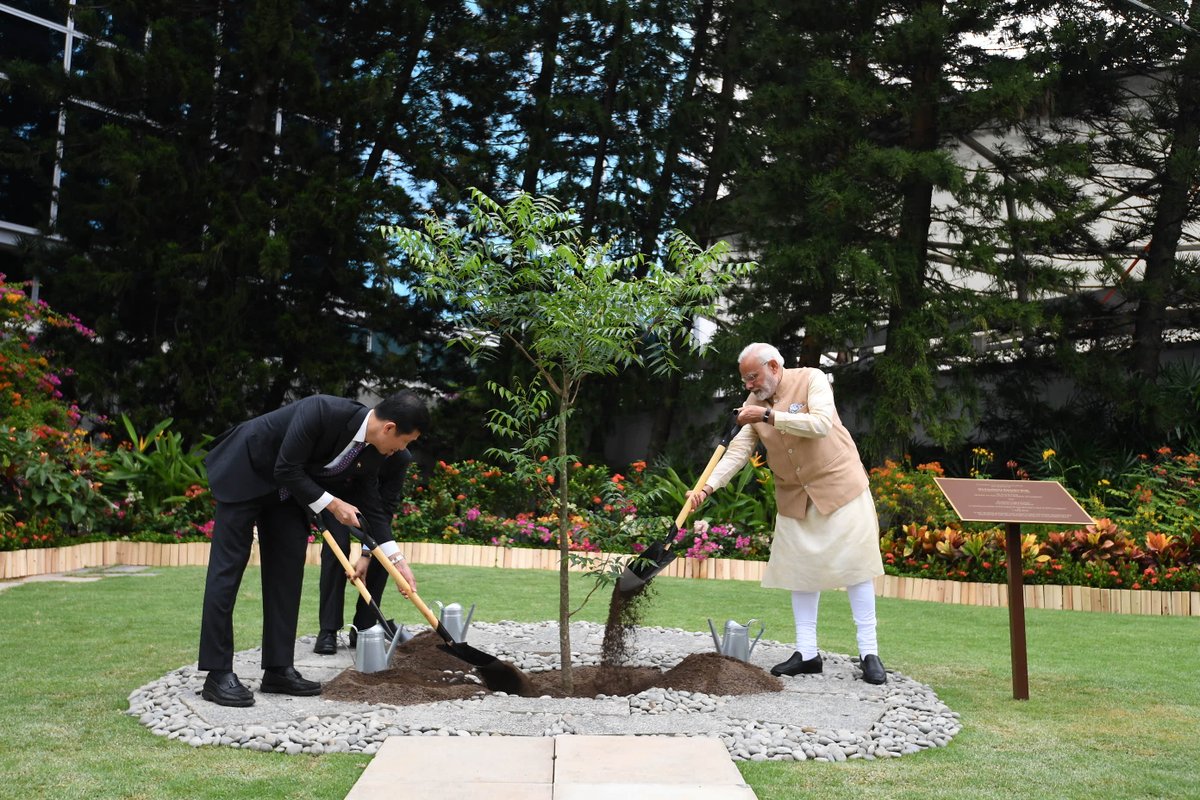 PM Modi concluded the visit to NTU by planting a Neem tree with president Suresh and Minister Ong on the campus. Photo courtesy: PIB

A pact was signed with National Institution for Transforming India for research and exchange partnership.

PM Modi concluded his visit to the campus by participating in a tree-planting ceremony; he was joined by Minister Ong and president Suresh.

The details of the six memoranda signed at NTU are listed below:

Through a S$2 million gift from Mr Kris Gopalakrishnan, co-founder of Infosys and Chairman of Axilor Ventures, NTU will create the Gopalakrishnan-NTU Presidential Postdoctoral Fellowships to enable some of the world’s best young scientists to build a research career at NTU. The endowed gift will fund up to two Presidential Postdoctoral Fellowships per year for five years, starting from academic year 2018-2019.

In partnership with one of India’s leading technological institutes, NTU will offer joint PhD programmes in science, engineering, management, computing and social sciences. The alliance covers supervision of research projects at both universities.

NTU will partner the renowned Indian Institute of Science, Bangalore, in offering joint supervision and research attachment opportunities for graduate and undergraduate students in a broad range of disciplines. 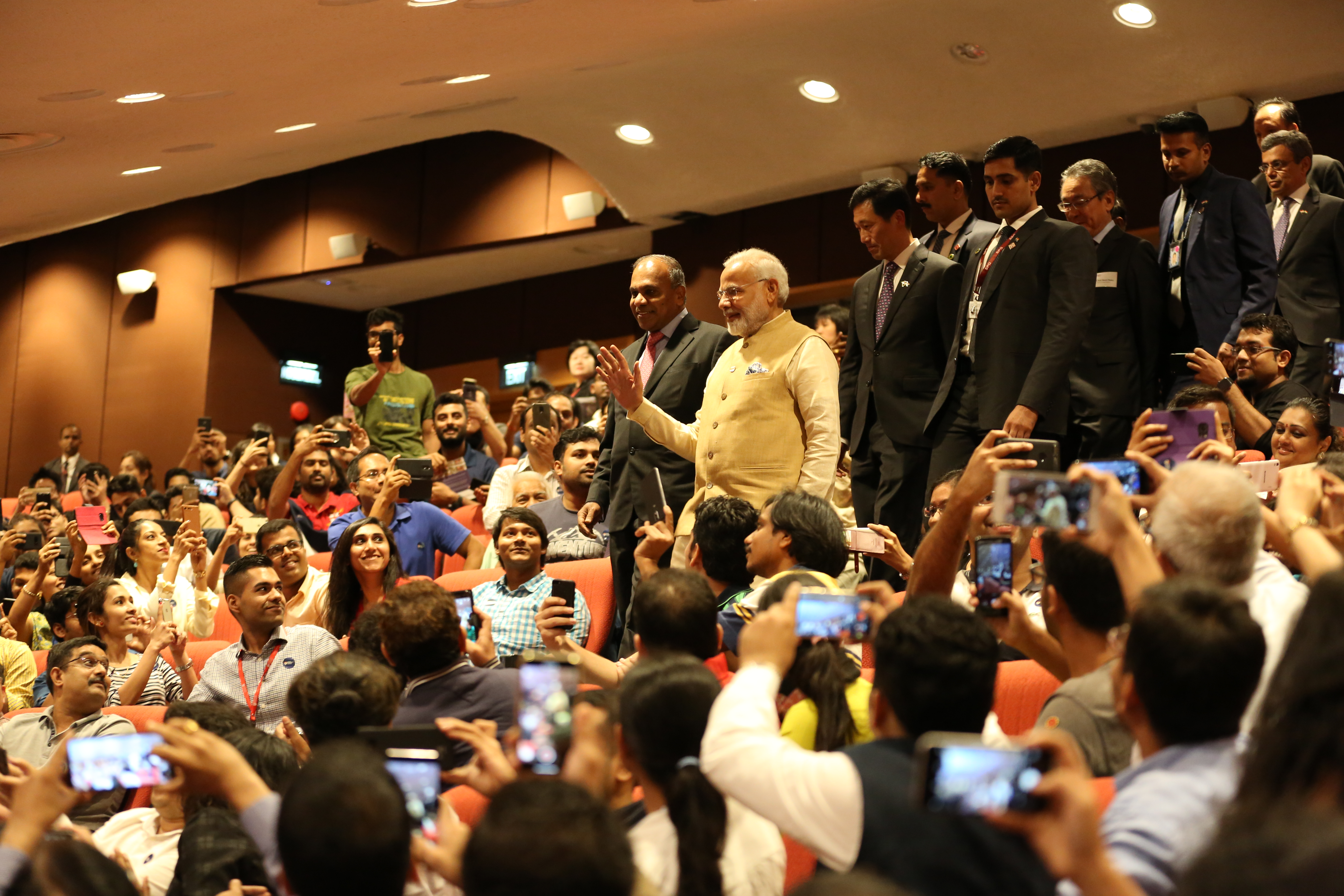 NTU will also work with the Indian Institute of Technology Bombay, a leader in the field of engineering education and research, to conduct joint PhD programmes in science, engineering, management, computing and social sciences. This partnership will enable joint supervision of research projects at both universities.

5. Research and exchange partnership with National Institution for Transforming India

The National Institution for Transforming India is the leading policy think tank in India spearheading the nation’s drive to develop a digital economy and knowledge society. This collaboration will leverage artificial intelligence, machine learning, cognitive computing and big data analytics to improve healthcare, cybersecurity, automation, mobility, smart energy systems and e-governance. It will also facilitate the exchange of scientists and students.

6. Collaboration with Indian Institute of Space Science and Technology in research and education

This wide-ranging partnership with Asia’s first Space University in India will involve the Satellite Research Centre at the School of Electrical and Electronic Engineering in NTU, the first university in Singapore to develop an undergraduate satellite programme. Covering space science and technology research and education, the tie-up paves the way for joint satellite projects and a sustained exchange programme in space research.