Brilliantly themed ‘Ínspite Of’, it's an ode to staying inspired even in these challenging times in spite of the current COVID-19 pandemic conditions.

One of the highlights of this celebration of arts by the LASALLE College of the Arts, Singapore, is the cross-collaboration mural, Dancing in Unison. 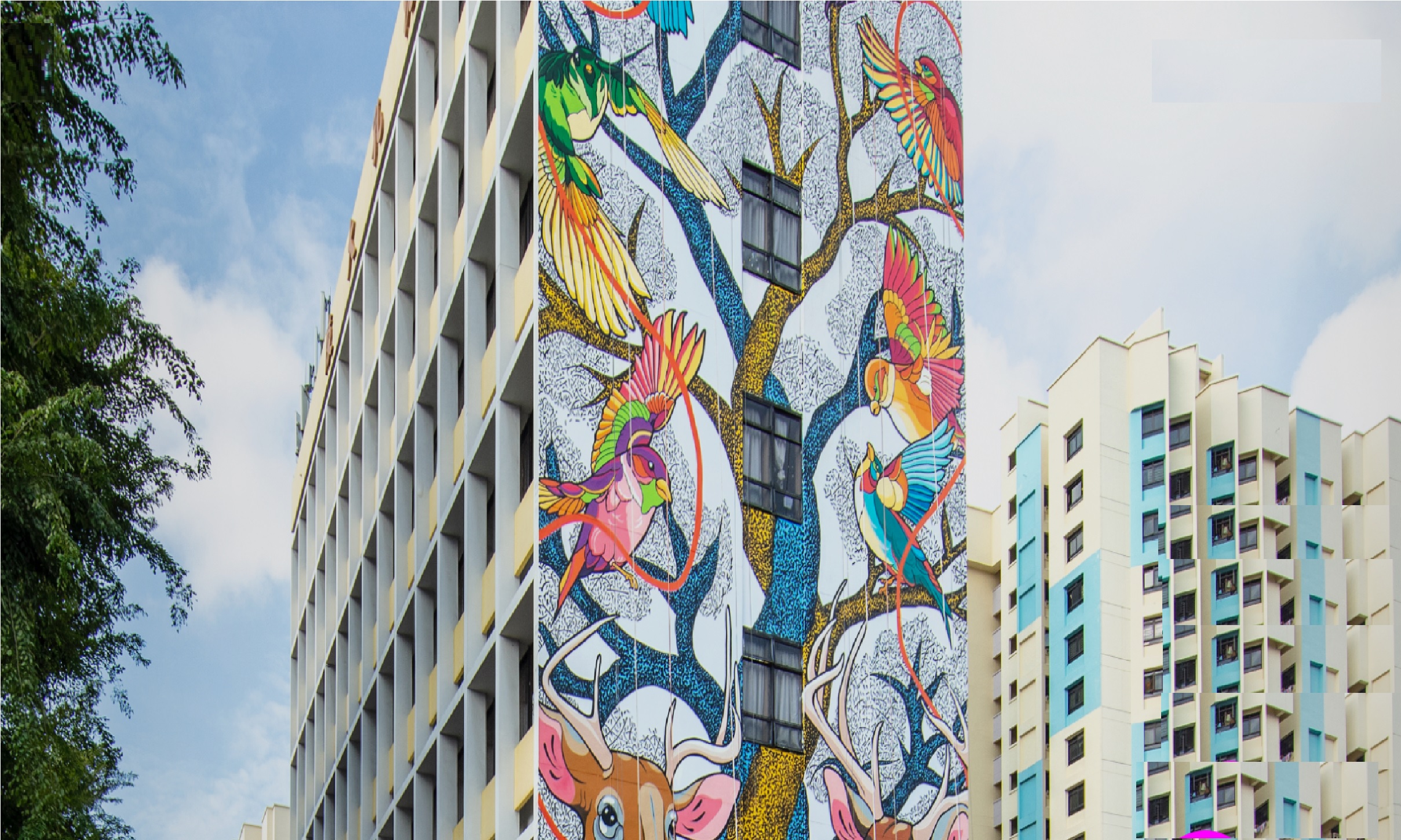 'Dancing in Unison' is a result of many months of virtual collaboration between Gond artist Padmashri Bhajju Shyam of India and contemporary urban artist Sam Lo of Singapore. Photo Courtesy: AWLI

'Dancing in Unison' is a result of many months of virtual collaboration between artists Bhajju Shyam and Sam Lo.

Bhajju Shyam was born and raised in the village of Patangarh in Madhya Pradesh, which is known to be the home for the Gond Pradhan indigenous tribe.

“I began my practice by filling colours in the works of my uncle, Jangarh Singh Shyam, one of the pioneers of Gond. Over the years I have mixed traditional folklore and stories from my travels, giving shape to a new and contemporary aesthetic to Gond Art”, says Bhajju.

He has also published several books about Gond over the last few years.

In 2018, Bhajju was awarded a Padma Shri, the fourth highest civilian award given by the Republic of India every year.

Sam Lo is a young and renowned Singapore-based urban artist whose work revolves around social commentaries fuelled by daily observations of her surroundings and research into the socio-political climate.

Her bold execution in her earlier forays into street art on this island nation led her to be dubbed with the moniker ‘Sticker lady’. 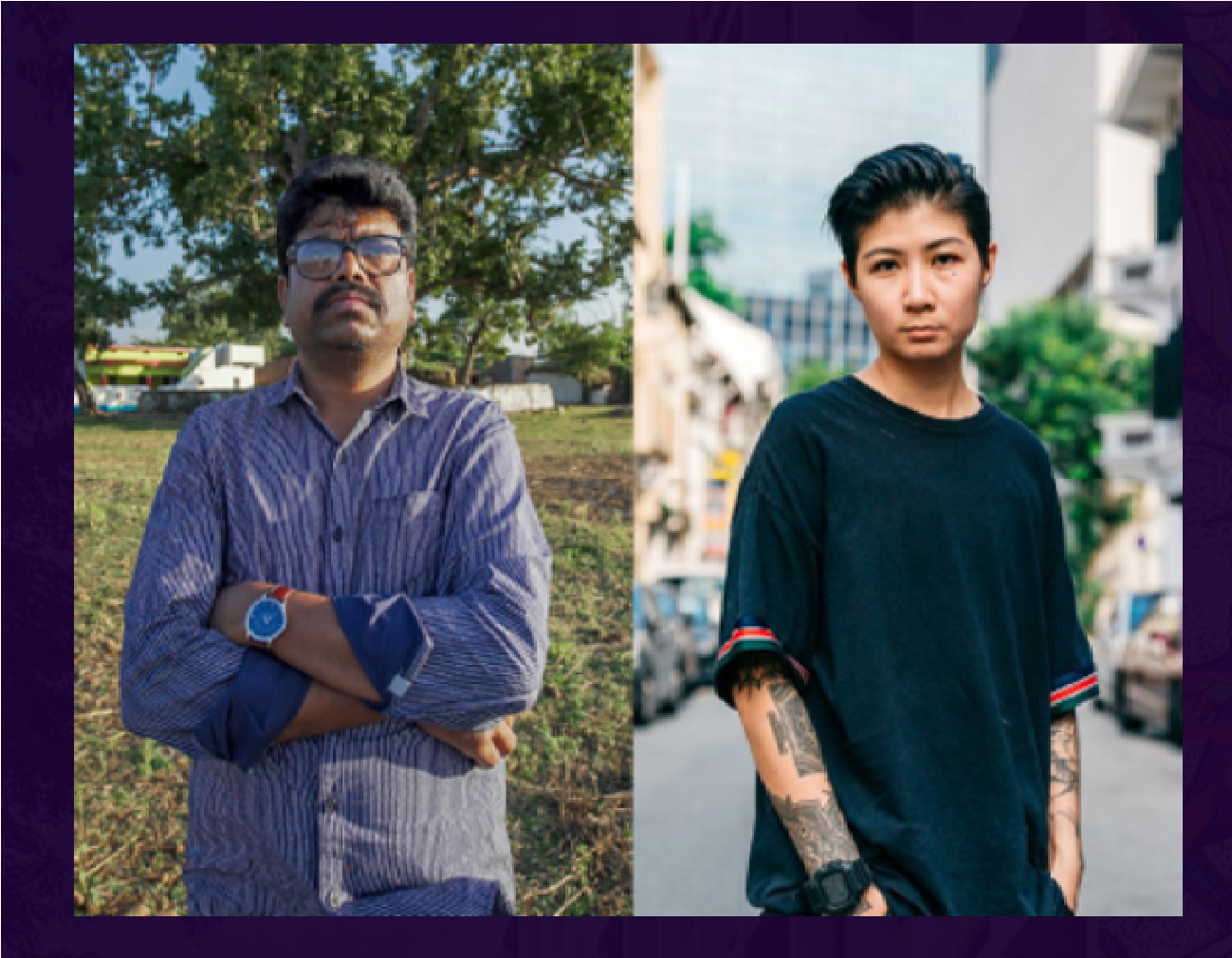 St+art India Foundation and the Singapore Tourism Board made it possible for Shyam Bhajju (left) and Sam Lo (right) to be a part of AWLI 2021 by LASALLE College of the Arts. Photo Courtesy: AWLI

Curation by St+art India Foundation a non-profit organisation based in India that works on public art projects and the Singapore Tourism Board made it possible for both artists to be a part of AWLI 2021 by LASALLE College of the Arts.

“Because they saw the potential for dialogue between mine and Sam’s practice”, adds Bhajju on how this exciting cross-collaboration came about.

The composition: Dancing in Unison

“After months of planning and communicating with Bhajju over Zoom, we were able to complete the composition of the mural”, says Sam.

“Sam and I conceptualised this mural together and it is definitely one of the biggest works I have made. It took about two months of back and forth, sharing ideas and sketches with one another until we were both happy with it”, says Bhajju.

“Due to COVID-19 restrictions, I was not able to partake in the execution of the work in Singapore’s Little India neighbourhood hence the whole mural was painted solely by Sam”, he adds.

“This is by far one of the most challenging and tallest murals I’ve done as when it came time to paint, I had to battle strong winds and wet weather conditions at seven storeys high!”, says Sam. 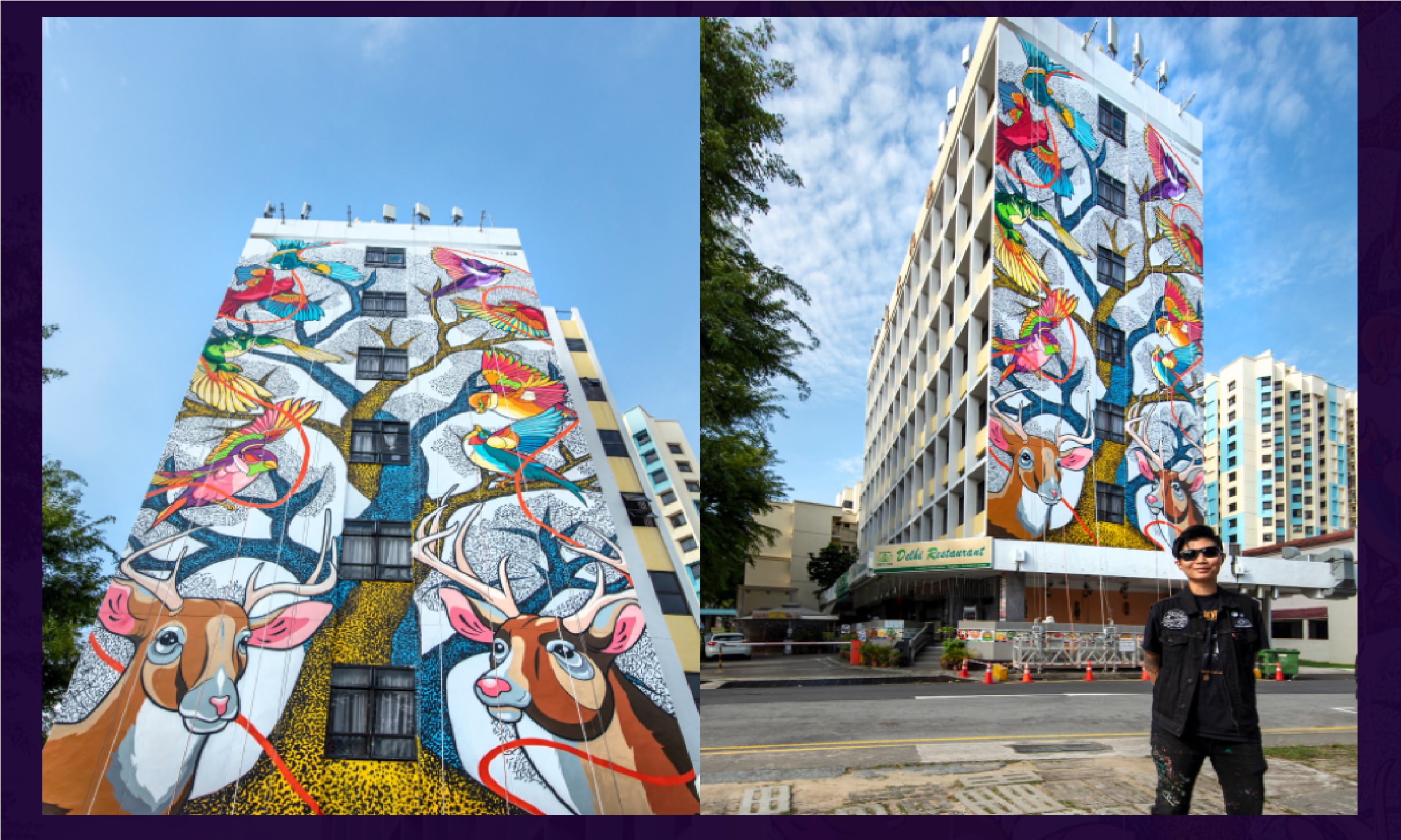 One of the tallest murals in Singapore, 'Dancing in Unison' stands at seven storeys tall on the façade of Broadway Hotel in Little India. Photo Courtesy: AWLI

“By the time it was done, I must have used upwards of 130 spray cans and 6 large buckets of wall paint”, she adds.

One of the tallest murals in Singapore, 'Dancing in Unison' stands at seven storeys tall!

According to Bhajju this mural explores the value of nature and our relationship with it. It further hopes to convey that despite varying histories and cultures, there are similarities in our ways of seeing and we are all interconnected in inherent ways.

“According to the Gond belief system, the tree is an all-embodying universal spirit. During the day, trees nourish and protect and by night they come into a life of their own”, says Bhajju.

“Trees are considered essential for the existence of all beings hence in the mural, it engulfs the urban environment of human dwelling (personified by the windows of the building) and becomes a metaphor for the universe where everything is interconnected from the land to the air”, he adds.

Sam believes that this mural talks about the dependency of the urban environment and nature, and further hopes to remind us that despite our varying histories and cultures, we are all interconnected.

"Specifically, I contributed two motifs to this mural – the sparrows which symbolise freedom and the red ribbon which is a reminder of an omnipresent energy that connects us all”, says Sam.

“As for the deer, they are considered a revered animal in India and serve as a tribute to Gond art”, she adds.

The Theme: Inspite Of

This extraordinary effort by the two artists, made possible by their passions and hopes for harmony for the future, resonates with the theme of ARTWALK 2021 – “In Spite Of”. 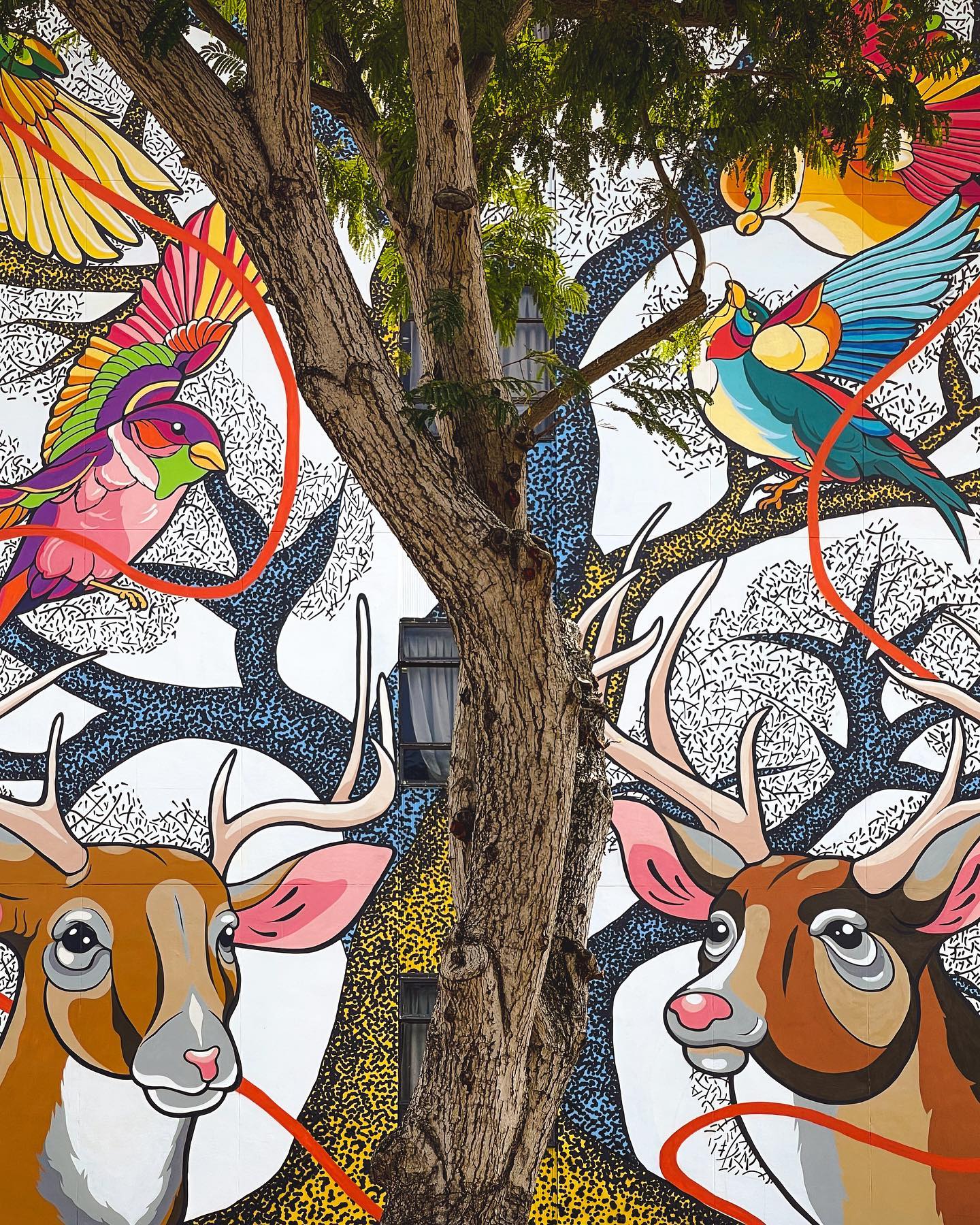 “It means that artists are able to overcome limitations and geographical boundaries, finding new ways to collaborate with one another to realise art”, says Sam.

“The theme In Spite Of is so fitting given the context this work was made in. It is a reminder that despite differences and any kind of difficulties, we can still come together to create something meaningful,” says Bhajju.

“In this context, art takes on new and creative forms, while still paying homage to our traditions”, he adds.

“I am extremely grateful for this opportunity and Sam’s execution of the mural. She was a pleasure to work with”, says Bhajju.

“I hope to be able to attend ARTWALK Little India by LASALLE College of the Arts in Singapore next year, to see our mural in the flesh and to also create something new with Sam again - sitting beside her and not through video calls” he adds.

“I'm honoured to be a part of ARTWALK and representing my community in this collaboration”, says Sam.

“I'm also thankful for the opportunity to have worked with a legend such as Bhajju, and to have also learned more about Gond Art and its traditions from him”, she says.

“Lastly, I’d like to thank the St+art India Foundation for believing in my work and giving me the chance to keep dreaming big”, she concludes.

You can check out this Gond-art-with-a-contemporary-touch mural on the façade of Broadway Hotel at 195, Serangoon Road in Singapore's Little India precinct. 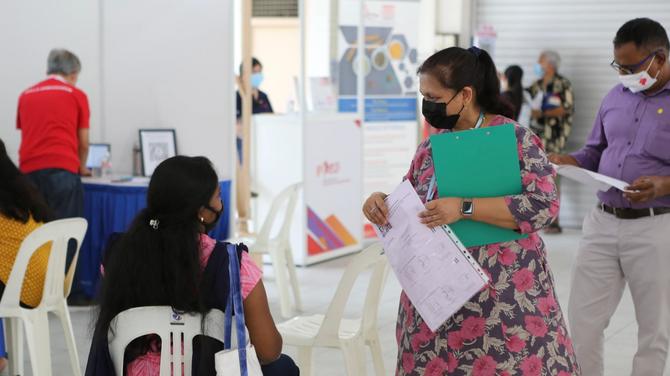