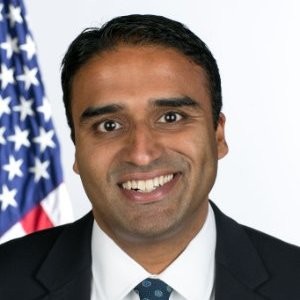 The committee is charged with organising activities surrounding the swearing-in of the new US administration on January 20, 2021.

"It is an honour to help lead the team that will plan the inaugural activities for President-elect Biden and Vice President-elect Harris while keeping their commitment to protecting the health and safety of Americans and demonstrating the strength and resilience of our nation," Varghese said in a statement.

Humbled and proud to serve on @BidenInaugural It won't be easy but being able to help plan the swearing in of an American President, when your parents grew up on the other side of the world, is an honor. Hope to do @JoeBiden, this team, my family and this country proud.🇺🇸 https://t.co/T5fd7DVUTK

"This historic inauguration will serve as the launching pad for the Biden-Harris Administration to get to work on day one and beat the pandemic, build back our economy better, and unify our country," he added.

The inauguration ceremony marks the commencement of a new four-year term for the president of the United States with the major events being the oath of office, inaugural address, parade and inaugural ball.

Varghese served as the Chief Operating Officer and Senior Advisor in the Biden-Harris campaign, overseeing day-to-day operations. He previously served in the Barack Obama administration in various roles, including as the Assistant to the President for Management and Administration and Deputy Director of Advance.

A lawyer by training, Varghese was born in the US to parents who immigrated from Thiruvalla, Kerala.